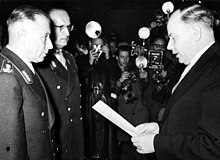 Rearmament describes the reintroduction of military structures in the Federal Republic of Germany and the German Democratic Republic after the Second World War in the 1950s. The topic was discussed very controversially in public and in politics from 1949 to 1956 in view of the war that had taken place only a few years ago. In its first foreign policy debate on November 24 and 25, 1949, the German Bundestag rejected national rearmament. Further political discussions led to the entry of the Federal Republic of Germany into the European Defense Community (EVG) (1952) and NATO (1955) after the intensification of the East-West conflict through the Korean War . Linked to this was the establishment of the Bundeswehr in 1955.

After the unconditional surrender of the Wehrmacht in May 1945, the four victorious allied powers, the USA , the Soviet Union , Great Britain and France, as the main powers of the anti-Hitler coalition, decided, among other things, to completely demilitarize Germany . The events of the Second World War and the enormous effort that was required to wrestle Nazi Germany and its allies led the Allies to keep the defeated country militarily weak in the future. This played an important role both for the creation of the German Basic Law and for the constitution of the GDR . However, due to the establishment of armed police units in both parts of Germany and the increasing tensions in the beginning of the Cold War , the corresponding agreements at the Potsdam Conference quickly became obsolete.

In 1949, the Schnez troops became operational, thus forming a secret army that included former members of the Wehrmacht and the Waffen SS . This force became superfluous at the latest with the establishment of the Bundeswehr.

From 1950 there were secret negotiations between the federal government around Konrad Adenauer ( Adenauer I cabinet ) and the US government (then Truman's cabinet ) about the establishment of West German armed forces . The Adenauer government commissioned a group of experts who recorded initial considerations in the Himmeroder memorandum in October 1950 .

Until 1955, the Federal Republic was not allowed to maintain a military , but wanted to set up its own border guards and police at the federal level . Due to the occupation statute, the Allied occupying powers initially only permitted riot police at the state level. Apart from this, the three Western occupying powers had already had military aid organizations made up of Germans since 1945 (e.g. the German mine clearance service under British supervision), some of which were armed. These so-called service groups comprised 145,000 men in 1950 and largely consisted of former prisoners of war .

Around 1950 the Western powers changed their policy and allowed the Federal Republic to set up its own paramilitary force to secure the borders, which in the event of a war was primarily intended to bring internal unrest under control. The Korean War began in mid-1950. In 1951 the Federal Border Guard was founded and set up with a strength of 10,000 men. This formation was divided militarily; she had light and medium weapons.

The establishment of the Federal Border Guard goes back to demands of the Allied Joint Chiefs of Staff on May 2 and May 17, 1950 for a West German remilitarization : “The United Chiefs of Staff are of the firm conviction that from a military point of view the appropriate and early rearmament of West Germany is of fundamental importance for the Defense of Western Europe against the USSR is. "Further:" The United Chiefs of Staff [...] agreed to recommend to the Council of Foreign Ministers that West Germany should be allowed to have 5,000 Federal Police, which is to be called the "Republican Guard" . The Joint Chiefs of Staff urge the Foreign Ministers to comply with this recommendation, as such a force could very well be the first step towards a later rearmament in Germany. "

Under the influence of the Korean War , the political discussion about the establishment of a new military unit received new impetus. This dispute led to massive protests and demonstrations as well as a strengthening of the West German peace movement . The protests did not shake the then government (1949–1953 Adenauer I cabinet , a coalition CDU, FDP and DP ). On February 8, 1952, the German Bundestag basically approves a German defense contribution against the votes of the SPD . The Supreme Commander of NATO in Europe , General Matthew Ridgway , called on 13 January 1953, the immediate formation of German forces.

On April 25, 1953, an agreement on the amount of the German defense contribution for 1953/54 was concluded between the Federal Republic of Germany, the other members of the EVG and Great Britain and the USA. This month was 950 million DM .

The London Nine Powers Conference from September 28 to October 3, 1954 with the participating states Belgium, Federal Republic of Germany, France, Italy , Canada , Luxembourg , the Netherlands , Great Britain and the USA resolved the sovereignty of the Federal Republic, the accession of the Federal Republic to the Brussels Pact ( WEU ) and to NATO and given assurances from the USA, Great Britain and Canada that they would keep their troops on the European continent. On December 18, 1954, the NATO Council, amending the Lisbon resolutions, set the target strength of NATO forces in Central Europe at 30 divisions. Compensation for this reduction in conventional strength should be the increase in the use of tactical nuclear weapons.

With the Paris Treaties of May 5, 1955, the Federal Republic received a sovereignty restricted by Allied reservations and was included in the security system of the Western European Union .

The Federal Republic of Germany joined NATO on May 9, 1955. On June 6, 1955, the Blank office was converted into the Federal Ministry of Defense and the security officer Theodor Blank (CDU) was appointed the first Federal Minister of Defense.

On June 30, 1955, an agreement on mutual defense aid between the USA and the Federal Republic was signed by the US Ambassador James B. Conant and Foreign Minister Heinrich von Brentano . In the contract, the USA assured the newly established armed forces of the Federal Republic of Germany extensive arms deliveries.

On July 13, 1955, US Ambassador Conant and Chancellor Adenauer agreed to hand over American semi-automatic assault rifles, tanks, artillery pieces, field howitzers and fighter planes to the Federal Republic. In return, West Germany was obliged to use the weapons only for defense purposes within the framework of the NATO alliance and not to sell or surrender them to third parties. The SPD opposition in the German Bundestag only approved the treaty at the third reading, which came into force on December 14, 1955.

On October 10, 1955, Federal President Theodor Heuss appointed the first soldiers of the new armed forces and on November 12, 1955 the first 101 volunteers of the Bundeswehr were sworn in by the Federal Minister of Defense, Theodor Blank. This November 12th is considered to be the actual "birthday of the Bundeswehr". On May 22, 1956, the military constitution (amendment to Article 87a of the Basic Law ), passed by a large majority, came into effect. November 12th was chosen because it was the 200th birthday of the Prussian army reformer Gerhard von Scharnhorst .

The superiors of practically all management levels in the new Bundeswehr had been recruited from former officers and NCOs of the Wehrmacht , including, of necessity, formerly staunch supporters of the Nazi regime . In 1959, 12,360 of the 14,900 Bundeswehr officers had already been appointed officers in the Reichswehr or Wehrmacht, 300 officers were from the Waffen SS . Every officer from the upper tier upwards had previously been checked for suitability by the personnel appraisal committee. Applicants from the Waffen SS or the National Committee for Free Germany were rejected in these ranks.

In addition to fundamental moral and anti-militaristic considerations, the democratic legitimation of the Bundeswehr was also questioned by a critical public . The Bundeswehr tried to counteract undemocratic tendencies with the “principles of internal leadership ” and the model of the soldier as a “ citizen in uniform ”. In addition to publications on this topic, the soldiers were also obliged to take a critical view of the democratic values, objectives and the Basic Law of the Federal Republic in training.

The remilitarization of the Soviet occupation zone began with the build-up of armed and barracked police forces. As a result, the inter-allied agreements on the demilitarization of Germany should be formally observed. In October 1949 these forces were centralized in the main training administration. At that time the forces consisted of approx. 80,000 men in the People's Police and 15,000 men in the Border Police. The forces were trained with light weapons, machine guns, but also with heavy weapons. From 1952 the barracked people's police were officially established in the GDR with 70,000 men. On January 18, 1956, the National People's Army (NVA) was founded.

In the NVA, the continuity of personnel in the transition from the armed forces to the new army was avoided as much as possible. Nevertheless, recourse was also made to former members of the Wehrmacht. Most of them came from Soviet captivity and had reoriented themselves politically out of conviction or opportunism . The best-known former Wehrmacht general who also served in the NVA was Vincenz Müller . By resolution of the Politburo of the SED on February 15, 1957, almost all former Wehrmacht officers were gradually released from the NVA and retired by the end of the 1950s.

On May 14, 1955, the GDR and the other seven member states signed the Warsaw Pact , the military assistance treaty of the Eastern Bloc under the leadership of the Soviet Union, in Warsaw .

In the GDR, the NVA was defined as a kind of spearhead against the so-called “ fascism ” and “ capitalism ” of the West. The NVA took over rituals that were already common in the Royal Prussian Army and in the Wehrmacht; such as the goose step in parades . The appearance of the NVA was also reminiscent of those of the predecessor facilities, the Reichswehr and the Wehrmacht, especially when it came to service suits .