Public is the area of ​​social life in which people come together to discuss problems that are to be resolved in political processes. For this, access to all sources of information and media must be free and the information must be freely discussed . In this freely accessible (public) space , the majority opinion should be able to develop undisturbed by censorship and other barriers.

In ancient Rome, politics in the Roman Forum was exclusively made by male citizens. 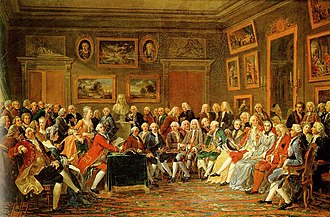 In the ancient democracies , the agora and forum were meeting places, which in modern times have often been presented as role models for the public, although they still had little in common with the modern, media -influenced publics.

In the German language , publicity emerged as an expression of a civic endeavor from the late 17th century, initially in literary and art-critical circles at meetings and in publications.

From the middle of the 18th century, topics of public debate became increasingly political and socially critical due to the influence of the Enlightenment . Places of this new public in European cities were theaters , salons , coffee houses , reading societies and Masonic lodges . Here met independently and partly in opposition to the forms of the public, in the absolutist corporate state had been established, namely the Duke's palace and the church, especially male exponent of the educated classes (sphere of "bourgeois public sphere"). 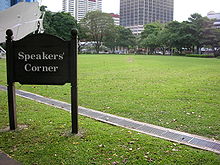 Social scientific discourse theories understand the public to mean the entirety of the persons potentially participating in an event (“ audience ” in the broader sense).

According to the ancient Greek ideal, according to Hannah Arendt, participation in the public of the polis in the agora is reserved for the free citizen who has overcome the necessities of living in the private household ( oikos ) and can move into the free sphere of the public. Following this logic, a working person is not free, because he is still busy with vital necessities that deprive him of freedom. Freedom is not understood here as freedom of action in the sense of a non-existent determinism , but as a leaving behind of private affairs.

Further definitions of public are: "Sphere of private people gathered to the public" ( Habermas : Structural change of the public ), "Network for the communication of content and statements [...], which is differentiated according to the communication density, the organizational complexity, and range according to levels, from the episodic pub, coffeehouse or street public to the organized public presence of theater performances, parents' evenings, rock concerts, party meetings or church days to the abstract public created via mass media ”(Habermas: facticity and validity ).

Furthermore, the “public meeting”, “public demonstration ”, “public hearing” (in court ) are public , in contrast to meetings “closed to the public”. The public of as many events as possible is a democratic principle. The press and radio have the task of creating publicity over long distances through reports, reports or direct broadcasts. Their forerunners were the theater stages . The limelight as the brightest possible artificial lighting until the beginning of the 20th century is still a synonym for public attention.

Jürgen Habermas distinguishes between two types of public: That part is what dominated by professional media and lobbyists with close proximity to the political center to the public, he referred to as "forged on the anvil", the part of the public, which by the civil society is made designates he as not bequeathed or autochthonous.

Internal public is a separate form that is not related to the whole of society. Rather, the relationship with larger groups , associations , companies or other organizations and corporations is affected. It denotes the total number of people concerned and is nevertheless subject to the same norms and basic organizational patterns as the “external public”. This inner public is separated from it and served taking into account the special information needs.

In democratic societies , the public plays an important role in the form of public opinion , because it is there that (political) opinion formation takes place. The press is an important part and mirror of the public. In this context, public goods are important that enable the public in the first place. According to some theories, a vibrant public is seen as the basis for the development of a civil society.

According to Nancy Fraser , Jürgen Habermas neglected the public's structural change because there are systematic obstacles “that actually prevent full and equal access to public debate”. This affects dispossessed workers, women, the poor and members of ethnic, religious and national minorities.

The historical dimension is essential. The class boundaries up to the First World War made the public a privilege of certain social classes (exclusions through the establishment of the criterion of courage ). Since the Enlightenment, a separation into private and public spaces has been accompanied by the fact that women are assigned to private and men to public space. In the opinion of critics, such gender-specific attributions have led to the fact that public opinion in bourgeois societies is often formed by excluding women from these processes. The public has therefore contributed to the establishment of problematic gender identities. Even in modern media societies, public communication often leads to the establishment of gender hierarchies that go hand in hand with mechanisms of inclusion and exclusion.

From the point of view of communication theory , the problem is to “identify the public and, above all, to generalize the relationships between the public and the public in an empirically sustainable manner”.

Joachim Westerbarkey begins with the classification as an "everyday category", then speaks of the contradicting functions of the public through the pairings of: "" Leveling and differentiation, conformity and plurality, curiosity and ignorance "". He also takes the view that there are only “special audiences” whose participants and content also vary. “Dynamics and plurality” characterize the idea of ​​the public.

Publicity of all significant legal, political and economic processes, as well as the formation of public opinion and will are considered criteria of a functioning democracy .

Axel Montenbruck explains: “The political image of man in democracies is primarily determined by the public's thoughts. In essence, it consists in a collective interest, the res publica . On the other hand, the public appears personified as an audience . This forms the real side of a generality of people or electoral citizens, which in turn co-determines the respective concept of the people . All these terms the generality, collectivity , sociality and the assembly aim at a bundling of individual interests and individual beings to something “ common ”. They all describe aspects of human communities . The public is also mostly associated with places such as the forum , the court, and the open and unarmed assembly. In this way, the public makes the general public visible in a concrete form and gives it its own space. " 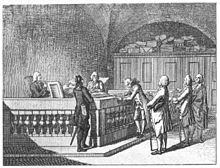 Illustration of a court hearing in the 18th century

The term public was originally only used in the sense of the public in court hearings . In procedural law , the public means both the fact that a court hearing is accessible to uninvolved persons and the group of spectators attending a court hearing who are not directly involved. For the state organs subject to the separation of powers , the idea of ​​the public as an essential element of democracy results: The legislative organs ( legislature ) in democratic states generally advise publicly, unless special circumstances (e.g. secrecy) require non-public treatment.

Court hearings ( judiciary ) including the announcement of judgments and resolutions are usually public (Germany: Section 169 of the Courts Constitution Act). Although not expressly mentioned in the Basic Law, the public sphere of oral hearings is a fundamental principle of the rule of law . According to Article 6, Paragraph 1 of the European Convention for the Protection of Human Rights and Fundamental Freedoms (ECHR), public negotiations in court are a prerequisite for a fair trial. The importance of the public in court hearings results from the history of law , in which a fight against the judiciary was repeatedly waged behind closed doors. The public also serves the control and independence of judges as well as the effective protection of fundamental rights .

Restrictions on the public in court hearings apply in family matters, to protect public or private secrets (§§ 171a, 171b, 172 GVG) and if the space in the courtroom is not sufficient for all interested parties.

Despite the public postulate of democracy, the decisive political deliberations (such as meetings of the coalition committee or parliamentary groups) take place behind closed doors. This is due not least to the type of media accompanying lengthy political processes, which prompts politicians to limit the penetration of media logic into their deliberations. Indiscretions give the public some insights into what is going on in negotiations, but this does not create a public sphere of discourse.

The Cologne Higher Regional Court passed three relevant judgments in February 2012 (Ref .: 15 U 123/11, 15 U 125/11 and 15 U 126/11). Due to its fundamental importance, the OLG Cologne has approved the appeal to the Federal Court of Justice . The question of the extent to which private circumstances affecting personality rights may also be reported, which were discussed in a public court hearing, has not yet been decided by the highest court.