The title of this article is ambiguous. Further meanings are listed under court (disambiguation) . A court (from Old High German girihti 'judgment, court, statute, rule', a derivation of ahd. Rëht 'right, right', which early on with ahd. Rihten 'right, straighten; put in order; rule; speak right' was connected) is an organ of the judiciary ( judiciary ).

Legal authorities have existed since the dawn of human civilization. In many cases, jurisdiction was originally the responsibility of the monarch himself or his agents. In the course of the Enlightenment , with the concept of the separation of powers in Europe and the European-influenced states, the conviction prevailed that the judiciary must be independent of the government.

The guarantee of judicial independence is therefore central to the concept of the court in modern constitutional states . The Swiss Federal Supreme Court has ruled, for example, that a court within the meaning of the European Convention on Human Rights is an authority that makes justified and binding decisions on disputes in accordance with the law in a judicial, fair process . It does not need to be integrated into the regular court structure, but it must be independent and impartial in terms of organization and personnel, in terms of the nature of its appointment, the term of office, protection from external influences and its external appearance, both vis-à-vis other authorities and the parties. In addition to the characteristics of independence and impartiality, its essence includes the fact that a court itself collects the legally relevant facts, applies the legal principles to these facts determined in a constitutional process and makes binding decisions on the matter for the parties. It must have extensive factual and legal cognition .

Typically, courts are state (or interstate ). Examples of non-governmental institutions with a judicial function are the ecclesiastical courts , private arbitration tribunals or the municipal arbitration offices . 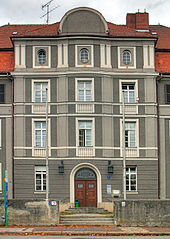 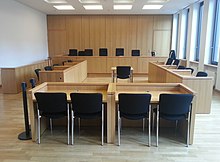 Courts in the Federal Republic of Germany are the federal courts and the courts of the federal states , depending on the court holder . Admittedly, the judiciary power ( judiciary ) is exercised by independent judges according to Art. 97 GG . However, the judiciary is not a self-governing state authority. The court administration (e.g. maintenance of the court building, covering the personnel and material requirements) is rather part of the public administration and thus the executive .

Special features arise in the military. Thus, in the event of a defense, military criminal courts can be set up as federal courts, Article 96, Paragraph 2 of the Basic Law, which speak law under the Military Criminal Law . Historically, so-called stand courts existed as exceptional courts , which are inadmissible in accordance with the Basic Law in the Federal Republic of Germany under Article 101, Paragraph 1, Clause 1 of the Basic Law.

When speaking of a court structure, the term court refers to an authority (e.g. district court ). The court can, however, also be understood as a judicial body (e.g. single judge , jury , jury , etc.); each court then has at least one judge . Heads of authorities are court presidents or supervisory judges who preside over a presidium ( Section 21a GVG).

The participation of laypeople as honorary judges is envisaged in criminal proceedings (then called " lay judges "), in commercial jurisdiction (then called " commercial judges " ), as well as in labor, financial, social and administrative jurisdiction. Lay judges participate in the local court in the lay judge's court, in the regional court in the jury court and in other criminal chambers . A specialty are the so-called civil servant assessors in disciplinary matters at administrative courts. In the broader sense, these are lay judges, but belong to the civil service as a special group.

Which court acts is determined by jurisdiction .

Which arbitration body ( single judge , chamber , senate ) is responsible is determined according to the applicable procedural law (e.g. GVG , ZPO ) and according to the business distribution plan , which is drawn up by the courts on their own responsibility.

The course of a court hearing is standardized in various legal sources.

The so-called maritime court negotiations (“ maritime courts” ) are not courts within the meaning of the Courts Constitution Act (GVG ); they are official expert procedures of the maritime offices .

In Switzerland the administration of justice in public affairs and the organization of the civil and criminal courts is partly cantonal regulated. Cantonal law specifically determines which cantonal civil and criminal court performs the functions of first and second instance provided for by federal procedural legislation. As a rule, regional courts exist as the first instance (district, regional courts) and the cantonal cantonal or higher courts as the second instance. At the federal level there is a first instance patent , administrative and federal criminal court as well as the Swiss Federal Court as the last court of appeal in all areas of law.

Court rules at the time of Charles V

A (regional) court has been a territorial unit for justice and administration in the county of Tyrol since the late Middle Ages, comparable to today's district authorities and district courts .

The judicial organization in the USA is characterized by its strongly federal character. Both the federal government and the individual states maintain their own court organizations and courts that are not interdependent. The federal courts follow the requirements of the United States Constitution and have exclusive jurisdiction over cases under federal law. The courts of the states are based on the respectively applicable constitution and are only competent for the areas of law that fall within the legislative competence of the state.