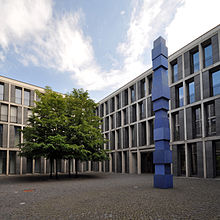 The Federal Labor Court (BAG) is the final court of German labor jurisdiction and thus one of the five highest courts of justice in the Federal Republic of Germany.

As an authority , the Federal Labor Court is subordinate to the Federal Ministry of Labor and Social Affairs and is subject to its official supervision . However , it is independent in its work as a court .

In the other states of the German-speaking area there is no independent supreme labor court; the final decisions in labor matters are part of the jurisdiction of the highest civil court. In this is Liechtenstein Princely Supreme Court in Luxembourg Supreme Court , in Austria 's Supreme Court and in the Switzerland Federal Court .

It was only after the Second World War that labor jurisdiction was completely separated from ordinary jurisdiction . The Basic Law , which came into force in 1949  , provided for labor jurisdiction as an independent branch of the legal system with its own supreme court in Article 96 (1), which in principle corresponds to today's Article 95 (1). Implemented this constitutional requirement was, which came into force on October 1, 1953 Labor Court Act , which was established by the Federal Labor Court. It began its judicial activity in April 1954 in Kassel .

In the course of German unification, the Independent Federalism Commission decided in May 1992 to relocate the Federal Labor Court to Thuringia . In 1993 the state capital Erfurt was determined as the future seat of the court. Since the move from Kassel to Erfurt in 1999, the court has its seat on the site of the former horn factory of the Petersberg Citadel .

The task of the Federal Labor Court is to maintain the uniformity of case law in the field of labor law as well as the further training of the law in the areas in which the legislature has unconsciously not created any final regulations or deliberately left the detailed formulation of the law to the courts (e.g. in Industrial action law ).

In exceptional cases, if the parties agree, a decision by a labor court can also be appealed directly to the Federal Labor Court (so-called jump revision , Section 76 ArbGG), for example in the case of legal disputes about collective agreements , industrial action or questions of freedom of association.

Like all appeal courts, the Federal Labor Court does not usually make any factual findings, but only reviews the contested decisions with regard to whether they contain legal errors. If a revision is found to be unfounded, it is rejected and the judgment under appeal becomes final . If, on the other hand, the appeal is well-founded, the Federal Labor Court can amend the judgment if all the factual findings necessary for the decision can be found in the reasoning for the judgment. If facts relevant to the decision are missing, the legal dispute will be referred back to the regional labor court for a new hearing.

Employees and way of working

The court is divided into ten senates, each with three or four professional judges, a total of 38 judges (as of November 2018). The proportion of women among the judges is currently (as of November 2018) with 17 out of 38 people, almost 45 percent. Furthermore, the court has 118 non-judicial employees and an average of eleven scientific employees are employed (as of 2018) who support the judges in their work.

The senates decide with three professional judges - a chairman and two assessors - as well as one honorary judge each from the circles of employers and employees. As a rule, the parties must be represented by a lawyer before the Federal Labor Court. Any lawyer admitted to a German court is entitled to represent the company. If an oral hearing (normal case) takes place or a decision is made in a written procedure (with the consent of the parties), then in the case of revision proceedings a decision is made by judgment , whereas in appeal proceedings decisions are made after consultation (normal case, similar to written proceedings; no consent of those involved) or after an oral hearing by resolution .

The responsibility of the respective Senate is based on the legal issues to be decided and results from the schedule of responsibilities , which (as of September 2020) looks as follows:

2nd Senate: Termination of employment relationships through dismissals as well as subsequent severance payment and continued employment claims , replacement of the consent to the dismissal

5th Senate: Wage claims including remuneration in kind and working time accounts, payment for delayed acceptance, minimum wages, continued payment of wages in the event of illness and on public holidays, maternity leave and all legal disputes that are not the responsibility of other Senates

7th Senate: Termination of employment relationships due to a time limit or condition or due to the Temporary Employment Act as well as subsequent claims for continued employment, formal works constitution, staff representation and speaker committee law, decision-making procedure for an employee representative body formed in accordance with SGB ​​IX , co-determination in individual personnel measures

If a Senate wishes to deviate from a decision of another Senate on a legal issue, it must call the Grand Senate in accordance with Section 45  (2)  ArbGG , which then decides on the case. In addition, a Senate can submit a legal question of fundamental importance to the Grand Senate for a decision if, in its opinion, this is necessary for the further development of the law or to ensure uniform jurisdiction ( Section 45  (4) ArbGG).

Pursuant to Section 45  (5) ArbGG, the Grand Senate is composed of the President of the Court, one professional judge (determined in the division of responsibilities) from each Senate and three honorary judges each from the circles of employees and employers. 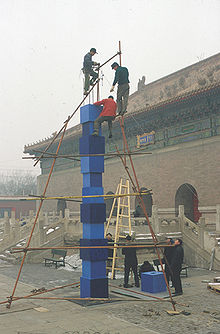 On November 22, 1999, the Federal Labor Court began its operations in Erfurt - in a new service building designed by the architect Gesine Weinmiller and built between 1996 and 1999. The design won an architectural competition advertised across Europe in 1995 with 167 competition entries. In 2000, the completed building was awarded the Thuringian State Prize for Architecture and Urban Development . The course and location of the horn factory formerly located on the property are symbolically represented in the surrounding park by a granite path.

The rectangular, compact-looking four-storey structure has two inner courtyards and faces north. Its energy-saving climate skin with its many windows makes the building appear open despite its compactness.

Inside the building, dark American oak tones and natural stone floors made of pale green Ticino gneiss dominate. All public areas, such as the negotiation rooms , the casino or the library , which on the first floor surrounds the inner courtyard of the building, are accessed via a naturally-lit, two-storey foyer . One third of the axis grid, which is flexible for future use, is filled with massive slate panels that are arranged in 2: 1 alternation with the window elements and are offset from one another across the floors. This offset gives the Theumar slate facades a light-looking play of shapes. In their milled slate panels, there are movable glass sliding shutters decorated with enamelled writing as sun protection. The barely noticeable text that filters the sun represents the endlessly repeating first paragraph of the first article of the Basic Law.

The landscape architect Dieter Kienast is responsible for the design of the surrounding park .

The address, at Hugo-Preuß -Platz 1, is reminiscent of a German constitutional lawyer who in 1918/1919 drafted a democratic Reich constitution that became the basis for the Weimar constitution and thus also for today's German Basic Law.

The Federal Labor Court has a legal, labor law special library with around 98,000 volumes and around 270 current journals . As a court library, it is primarily available to judges and court staff. In addition, external parties can also use the library within the framework of the library's usage regulations.

Joint Senate of the Supreme Courts of Justice of the Federation

Labor jurisdiction in the Federal Republic of Germany