The title of this article is ambiguous. Further meanings are listed under Park (disambiguation) . 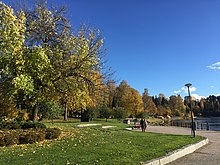 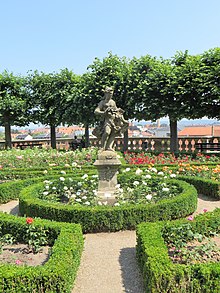 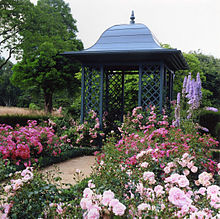 The Central Park in New York

Park of the Villa Haas

The word park (from the Middle Latin parricus "enclosure"; plural parks , sometimes parks in Switzerland) denotes larger green areas designed according to the rules of garden art , which are used for beautification and relaxation. A park would like to achieve an idealized landscape with lawns , shape-defining trees and architectural elements.

Parks were initially mostly created outside of cities, often as palace gardens , zoos , ("game parks"), sometimes also as hunting gardens , large-scale landscaped gardens. Examples of this are the so-called “ French park ” in a geometrically regular style or the “ English landscape park ” in a natural-like, irregular style.

The landscape artist Pückler-Muskau advocated the idea that the park should only "have the character of the great outdoors and landscape". That is an idealized nature and seeks to unite the most beautiful reproducible landscape images in a limited space. The park designer calculated the distribution of trees and the mix of colors, but human intervention was only allowed to be visible on the paths and buildings. Flower decorations on beds are excluded in the park; nevertheless, flowers should decorate forests, bushes, meadows and bodies of water more than in the wild, but in such a way that the artificial planting is not noticed.

The park is a large natural style garden, but not all gardens of this style can be called a park or are park gardens. A fair size of the park was desirable, but not necessary. In the small park, the forest became a grove and a grove , the lake a pond .

Since the middle of the 18th century, more and more inner-city recreation and recreation areas have been established, such as public gardens, public parks and city parks (see: Volksgarten ) and city ​​forests .

The function of forests and parks as “ green lungs ” is particularly important in the vicinity of cities and metropolitan areas. This relates primarily to the formation of oxygen , but also to the effect of the leaves and needles as a dust filter.

In Germany, a distinction is also made between parks with a certain status depending on the area. Protected natural areas of at least 20,000 hectares with a low degree of protection and mainly tourist recreation areas are referred to as nature parks , from an area of ​​at least 10,000 hectares with a medium to high degree of protection they are considered national parks . In a figurative sense, the term is also used for large areas, such as landscape parks and regional parks .