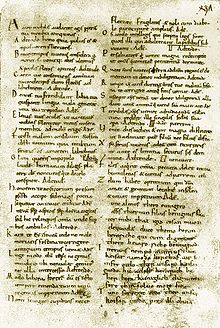 The term Middle Latin summarizes the various forms of the Latin language of the European Middle Ages (around 6th to 15th centuries). An exact differentiation on the one hand from the preceding late Latin (Latin of late antiquity ) and on the other hand from the new Latin of the humanists that emerged in the Renaissance is not possible.

Based on the literary language of the late antique imperial era, the language of jurisprudence and the church fathers , sometimes, but by no means consistently, influenced by the Romance languages ​​or the respective mother tongue of the author, but contrary to common prejudices (" kitchen Latin ") always in contact with the Ancient literature of the classical period, especially poetry , produced an extremely heterogeneous linguistic material that encompasses the whole range from slang , colloquial , pragmatic diction to highly rhetorical or poetic stylization at the highest level and, in its top-quality products, the comparison with the ancient, much stronger There is just as little need to shy away from the literary production filtered by the selection of the traditional process as the one with the simultaneous or later vernacular literary production. 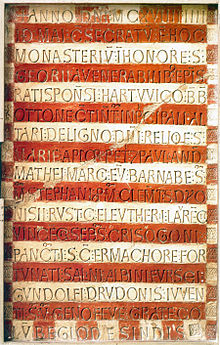 When writers dealt with antiquity and Christianity at the beginning of the Middle Ages , only Latin was available to them as a trained written and book language in Romania , that is, in the area in which Latin had established itself as a colloquial language; Romanesque book literatures were only to emerge in the later Middle Ages (from around the 12th / 13th centuries). Even Germania could not come up with a more suitable written language than Latin, especially since the Germanic languages ​​had developed a culture and (mostly oral) tradition that differed from the Mediterranean world. In addition, since the clergyman, who was also the writer at the time, dealt verbally and in writing with the Latin that he found as the language of the Bible , its exegesis , Christian dogmatics and the liturgy , it was obvious that this should be used Language took over as written language.

This Middle Latin differs from classical Latin in numerous ways . The deviations from the classic norm have various causes:

Throughout the Middle Ages, Latin was a living language that was fluent in the educated classes not only in writing, but also orally, which also included an active mastery of verses and metrics . All those who had a certain level of education were bilingual : on the one hand they spoke their respective mother tongue, on the other hand Latin, which is therefore often referred to as the “father tongue” of the Middle Ages. As already said, the Middle Latin spread far beyond the borders of the Roman Empire , so far as East Germany , Jutland , the Danish islands , after Sweden , Norway and Iceland , in the Slavic areas to the real Russia in and after Hungary and Finland .

The "mother tongue" was expressed in the fact that ancient words were given new meanings, new derivations and words were formed and the language was generally dealt with as with a mother tongue, which is constantly changing , but without ever following the models of the classical era forgotten to which one always remained committed.

www.sglp.uzh.ch/static/MLS/files/Roelli_-_Neulatein.pdf: "It was not until the 18th century that these [vernacular literatures] (based on the French) began to displace Latin."
Accordingly, the rise of the vernacular and the Enlightenment should be more responsible for the "death" of Latin than the turning away from Middle Latin and the return to classical Latin.

The end of Middle Latin was not brought about by the vernacular, but by Renaissance humanism and the so - called Neo - Latin that it gave rise to, which gradually became established in the 15th and early 16th centuries. New Latin was characterized by a stricter orientation to classical Latin . Few classical authors, especially Cicero and Virgil , were considered role models. This backward-looking standardization paralyzed the lively development of language and made it difficult to use the Latin language in everyday life. The virtuosity of some authors disguises the fact that the lack of flexibility in Neo-Latin resulted in overall linguistic impoverishment. The most passionate proponents and lovers of Latin, the humanists, contributed significantly to the suppression of the Latin language through their struggle against what they believed to be barbaric Middle Latin and their insistence on the norms of classical antiquity. It was only during this period that Latin as the language of education and politics began to freeze and “ die ”.

Features of Middle Latin and deviations from Classical Latin

The representation of the phonetics of Middle Latin encounters considerable difficulties for three reasons, firstly the period of around 1000 years, during which there were considerable changes, secondly the spatial extent over large parts of Europe and the associated regional influence from the most diverse in vernacular languages ​​used in this area and, thirdly, the difficulty of reconstructing them exclusively from handwritten evidence and interferences with vernacular languages. Under these circumstances there could not be a uniform debate. Nevertheless, some general statements can be made.

The Latin of the Middle Ages is characterized by a considerably more extensive vocabulary, which is enriched on the one hand by new Latin formations with the help of prefixes and suffixes as well as semantic training , on the other hand it borrows from various other contemporary vernacular languages ​​and Greek . Since a large part of the early Christian literature was written in this language and some Greek expressions had been retained in the Latin translation of the Bible, a considerable amount of Greek word material had already been incorporated into the Latin language in late antiquity. Even if the knowledge of the Greek language of most medieval scholars is not to be exaggerated, they were in a position to create further new formations based on Greek-Latin glossaries or bilinguals . Another source were the languages ​​of the Germanic peoples who succeeded the Romans in Central Europe . In addition, many of the classic Latin words that were no longer in use were replaced by new words based on Vulgar Latin and the Germanic languages .

The Middle Latin writers and poets strove to produce a literature whose focus was less on antiquity than on the present with all its profound social, cultural and political upheavals. The literary genres that have been cultivated are innumerable. Among the traditional genres (such as history , biography , letter , epic , didactic poem , poetry , satire and fable ) new ones, like the saint's legend , the translation report , the Miracle Collection , the visionary literature , the homily , the figure poem , the hymn and the sequence , the puzzle seal .

Of course, religious literature was of great importance. It encompasses both prose and poetic works and has partly a broader audience, partly the educated elite as a target audience. The popular versions of legends of saints (e.g. the Legenda aurea by Jacobus de Voragine ), miracle stories and other examples (e.g. the works of Caesarius von Heisterbach ) were aimed at a broad readership . In some cases, such works were translated into the vernacular at an early stage and also reached their audiences via sermons, for which they served as collections of material. Theological treatises, biblical commentaries and most of the poetic works had their place primarily in the school, sometimes also in court society and in the vicinity of educated bishops.

The ancient drama was initially not continued as it was tied to the requirements of ancient urban culture and was rejected by Christianity due to its connection with pagan cult. The dramas in Hrotswith von Gandersheim stand out as a contrast-imitative examination of the Terence model . Parody is widespread (only represented by a few examples in ancient times). New forms are spiritual play and comedia, which is completely independent of ancient drama .

Two fundamentally different techniques are available for poetry and are not infrequently used alternatively by the same author: the metric technique continued in the ancient tradition, which is based on the length of the syllables (quantity), and the technique derived from vernacular poetry, in which the number of syllables and the orderly sequence of stresses (accents) structure the verse. Metrical poetry is also stylistically in the tradition of the ancient poetic language, since mastering it requires intensive examination of classical models such as Virgil and Ovid as well as the Christian poets of late antiquity. Outsider phenomena here for some authors are the renunciation of the synaloeph and the use of rhyme, especially the so-called Leonine hexameter . The beginnings of the accenthythmic technique are closely related to the music of the Middle Ages , because almost without exception it is poetry set to music .

Prose and verse are used depending on the occasion and target audience, largely independent of the topic. Form types that combine prose and verse in different ways are opus geminum and prosimetrum . In prose, the accenthythmic clause, the cursus , prevails over the quantitating clause . Also encounters the rhyming prose .

The Medieval Latin literature is earlier than the vernacular literature and this also has a lasting effect: poets such. B. Dante Alighieri or Francesco Petrarca in Italy, some of whom still wrote in Latin, also transferred content and style to their works written in Italian.

In the light of what has been handed down today, the Germanic literatures appear to be even less independent and until the 12th century contain texts that were almost exclusively translated from Latin, more or less precisely. The Germanic folk and heroic poetry, which differed greatly from the ecclesiastical Mediterranean tradition, was initially no longer cultivated after the introduction of Christianity and was soon banned. Despite many indirect references to its former wealth, it was only saved for posterity in the rarest cases - by monks. In England alone, whose culture developed in the first centuries after the conversion quite free from patronage by continental currents (6th-9th centuries), a book literature in the vernacular emerged in the early Middle Ages, the oldest evidence of which is the all-round epic Beowulf . Similar legacies from the Franconian Empire mentioned by contemporary historians have been lost.

Conversely, of course, folk poetry also had a strong impact on Middle Latin literature. Since around the 12th century there have even been - e.g. B. in the Carmina Burana - numerous poems, which are partly written in Latin and partly in German.

Based on the ancient prerequisites (illustrations in specialist literature, poetry, the Bible), illustrated works have increasingly emerged since the Carolingian Renaissance , the illustration of which can be attributed to the author himself in individual cases. Literature production and book illumination are therefore closely related.

Paragraph is unoccupied and reads like a personal opinion of a WP author ("the place it deserves", "does not sufficiently know its value", "misinterpreted")

Medieval Latin literature does not take the place it deserves in science or in schools, because the many forms of language that were used as written language between late antiquity and humanism (approx. 550–1500) and their value are not sufficiently known. Until the very recent past, Middle Latin was viewed from a classical perspective as an inferior appendage to classical Roman literature. In some cases, the use of Latin in the Middle Ages is also misinterpreted as a regrettable suppression of the mother tongue and as a cultural alienation.

A comprehensive, complete modern dictionary of the Middle Latin language does not yet exist. The basis of the lexical work are first of all the dictionaries of classical Latin such as the Thesaurus linguae latinae (volumes IX 2, fasc.1-14, bis protego have been published so far ), Karl Ernst Georges' extensive Latin-German concise dictionary and the Oxford Latin Dictionary . For words or meanings used exclusively in Middle Latin, the following should also be used: