Fredegar (also Fredegarius Scholasticus ) is the traditional but not confirmed name of the author of an early medieval Latin chronicle from the second half of the 7th century. The Fredegar Chronicle is next to the Liber Historiae Francorum, which was written independently in the early 8th century, a main source for the history of the Franconian Empire in the 7th century.

The chronicle has been the subject of research discussions since the 19th century. The question of the author and the language of the chronicle are the focus of interest.

The author's name Fredegar does not appear in the tradition until the 16th century, first in Claude Fauchet in Recueil des antiquitez gauloises et françoises (Paris 1579). It can therefore by no means be regarded as secure. It is also unclear how many people are actually hiding behind this name. Bruno Krusch , who also edited the relevant text edition, assumed three scribes who wrote or continued the chronicle in stages, with the last author revising the older models and giving the chronicle its current form. This thesis found both supporters and opponents. John Michael Wallace-Hadrill and other researchers modified Krusch's thesis and adopted two authors. Most recent research, however, assumes that there was only a single author who wrote the work shortly after 659, when the last anticipatory event took place. It is also generally assumed that the author came from aristocratic circles, possibly from the royal administration, since the texts suggest a clear interest in these areas. Whether he was really a layman, as Wallace-Hadrill suspected, remains to be seen.

Mostly it is also assumed that the author originally came from Burgundy - Krusch also assumed in his thesis that two of the three authors he suspected came from Burgundy - but later moved to the Franconian part of Austrasia . The work was probably intended for the Austrasian audience. The assumption is quite likely that it was specifically intended to serve the interests of the Pippinids , who had to cope with the fall of the mighty house keeper Grimoald during this time . 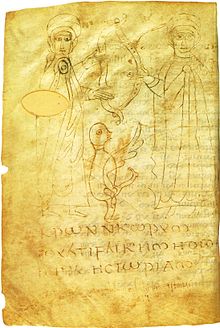 The chronicle of the so-called Fredegar is a world chronicle that ends abruptly in 642; However, some details go as far as 659 AD (IV 81). Since these later events took place in the Byzantine East, the Chronicle cannot have been completed before the year 660. The first five chronicles (books I-III) build on older works. Among other things, Hippolytus of Rome (more precisely a revised Latin translation of his Greek chronicle, the so-called Liber Generationis ), Isidore of Seville , Hieronymus , Hydatius of Aquae Flaviae and Gregory of Tours of the chronicle served as a source. Roger Collins, for example, assumes that the chronicle was written around 660 and represents a historiographical collection of a “world history” based on the above-mentioned late antique chronicles and the first six books of the histories of Gregory of Tours, albeit in form a compilation.

The fourth and last book of the Chronicle is particularly important and, despite many problems, represents the central source of the Frankish imperial history of the 7th century.

The author's interest was primarily in the rulers, whose weaknesses he pointedly (and at times probably exaggerated) emphasized. The yardstick for judging the rulers is their responsibility for the spread of Christianity, as the founder of monasteries and promoter of the organization of the church, and is thus an expression of the Christianization of the entire view of life. The secular component of his rule is neglected, as is his claim to martial leadership. He is mostly (but not generally) hostile to the influence of women on government affairs. The chronicle also devotes a lot of space to the aristocracy. In the chronicle the "Franconian Troy saga" is mentioned for the first time, the alleged descent of the Franks from the mythical Trojans (see also Origo gentis and Lower Rhine Troy myth ). But there is also some criticism of the Merovingian kings .

The chronicle contains one of the earliest European evidence of the Arab conquests , it says:

The people of Hagar , who are also called Saracens , as the Book of Orosius testifies, are a circumcised people who from ancient times lived on the slopes of the Caucasus Mountains on the Caspian Sea in a land called Ercolia; when their population became too dense, they finally took up arms and invaded the provinces of the emperor Heraclius to plunder them; Heraclius sent soldiers to meet them to resist them. But when the battle broke out, the Saracens defeated the Roman soldiers and inflicted a heavy defeat on them. In this battle 150,000 Roman soldiers are said to have been killed by the Saracens. [...] (Fredegar, Chronik IV 66, translation from Andreas Kusternig / Hermann Haupt: Sources on the history of the 7th and 8th centuries , p. 233 [see editions])

The Fredegar Chronicle also reports on the relations between the Frankish Empire and the countries of Central and Eastern Europe and is the only independent written source (all later reports are based on Fredegar) that the existence of the early Slavic Samo Empire.

The work, written in poor Latin, has survived in 38 manuscripts, the earliest probably originating in Metz around 700. The division of the six chronicles into four books and chapters came later. In the Carolingian period , the Fredegar Chronicle was continued as the Carolingian house chronicle until 768. This continuation is called continuationes .

Detailed references are in the (periodically updated) historical sources of the German Middle Ages , ed. from the Bavarian Academy of Sciences, to be found ( online ).