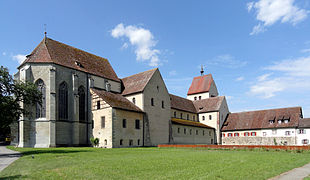 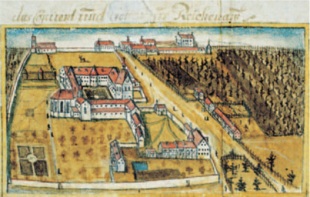 The Reichenau Monastery ( Latin: Monasterium Augiensis ) was a Benedictine abbey in Mittelzell on the island of Reichenau in Lake Constance . It was founded by Pirminius in 724 and was the priory of the Bishop of Constance from 1540 . Along with St. Gallen and Fulda, it is one of the most important monasteries of the Carolingian era. In 1757 the monastery was closed and in 1803 the last monks left the island. Today the town hall of Reichenau is located in the monastery building .

The book illumination of the monastery was included in the World Document Heritage of the World Cultural Organization UNESCO in 2003. Since 2001, after 250 years, a small community of Benedictines has been living on the island again.

Location of the island of Reichenau

The island of Reichenau belonged to the sphere of influence of an Alemannic nobleman named Sintlas, who lived in the nearby Sandeck Castle , in what is now the municipality of the opposite Salenstein on the Swiss bank. That is why the island was previously called Sintlas-Au or Sindleozesauua. When Saint Pirminius came to Untersee in 724 , Sintlas asked him to build a chapel in the area. Pirminius chose the island of Reichenau as the place. It was overgrown by an inhospitable jungle and full of snakes, toads and insects. A spring was formed where Pirminius first set foot on the island. But the vermin fled the island for three days and swam across the lake. Pirminius and his companions cleared the area, made the island habitable for people and founded a monastery.

The Benedictine monastery was founded in 724 by the mission bishop Pirminius in the then largely pagan Alamannia . In the following years it became a Carolingian abbey under Abbot Waldo and enjoyed the support of the Franconian house keepers and kings. The first heyday of the monastic community, which was important for the Christianization of Alamannia, fell in the late 8th and 9th centuries. Abbot Waldo (786–806) was the founder of the Reichenau School of Academics. He gave Egino of Verona permission to found the Cella St. Peter and Paul on the western tip of the island. Abbot Haito (806–823) was the builder of the Marien Minster in Mittelzell. In 888 Emperor Charlemagne was buried in the church choir . The Reichenau fraternization book and the St. Gallen monastery plan drawn up on the Reichenau date back to the 9th century, at the end of which the politically very effective abbot and Archbishop of Mainz Hatto III. (888–913) had St. George's Church built in Oberzell.

Thanks to privileges such as immunity , duty-free rights, the right to vote and gifts from the kings Heinrich I , Otto I and Otto II and their visits, Reichenau achieved its second cultural heyday in the time of the Ottonian kings around the turn of the millennium. This is represented by the “golden” abbot Witigowo (985–997) and the reform abbots Immo (1006–1008) and Berno (1008–1048). The famous Reichenau writing school belongs here, as well as the wall paintings in the Georgskirche in Oberzell or the historiography of Hermann von Reichenau († 1054) and Berthold von Reichenau . A kind of afterglow of the island monastery can be seen for the reign of Abbot Diethelm von Krenkingen (1169–1206). Then the spiritual and material decline of the monastic community began in a strongly changing social and economic environment of the late High Middle Ages. Attempts at reform failed repeatedly. In the second half of the 14th century, the entire monastery property was pledged for a time. Abbot Eberhard von Brandis finally sold all goods and rights of his monastery to his relatives in 1367. In 1402 there were only two noble lords of the convent as "monks" besides the abbot.

At the end of the Middle Ages, the Benedictine monk ideal took off again, the cathedral in Mittelzell was expanded to include the late Gothic choir , and the Radolfzell chronicler Gallus Oehem wrote the history of the monastery. In 1540 Abbot Markus von Knöringen renounced the management of the monastery, which he ceded to the Bishop of Constance. In the following period, Reichenau, as a priory with twelve monks, was only an administrative office of the Diocese of Constance (Obervogteiamt). The fortunes of the Reichenau Monastery were also described in Heinrich Murer's short, but lavishly illustrated chronicle from around 1627 .

Dissolution of the monastery

The spiritual community on the Reichenau ended up striving for independence with the dissolution of the monastery in 1757. In 1803 the monastery was abolished as part of the secularization after the Reichsdeputationshauptschluss .

250 years after the last Benedictines had to leave the island of Reichenau, through the mediation of the Münster Bishop Reinhard Lettmann and the Freiburg Archbishop Oskar Saier, on September 1, 2001, Father Nikolaus Egender OSB , former abbot of the Dormition Abbey in Jerusalem , and Father Stephan Vorwerk OSB , former Prior of the Tabgha Benedictine Priory , settled on the island. On June 13, 2004, the Cella St. Benedikt was officially founded. The cella is located in the rectory of St. Peter and Paul in Niederzell and is run as a "dependent house" of the Archabbey of St. Martin zu Beuron and supported by the Archdiocese of Freiburg . The Cella Stephan Vorwerk OSB and Hugo Eymann OSB have been part of the team since 2010 . The main task of the convent is the local parish pastoral care on Reichenau.

See the list of abbots of the Reichenau monastery 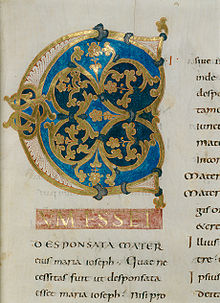 Lectionary from Reichenau, 2nd third of the 10th century, today in the Badische Landesbibliothek

The monastery was one of the important cultural and scientific centers of the Carolingian and Ottonian empire in the early Middle Ages . Among other things, Reichenau was also the place of activity of the abbot Walahfrid Strabo , who wrote the Visio Wettini there in 824 and the early botanical work Liber de cultura hortorum (On the care of the gardens) around 840 .

Probably the most important abbot of Reichenau was from 888 to 913 Hatto III., Archbishop of Mainz (891–913), Arch Chancellor of the Holy Roman Empire . In the wake of Arnulf of Carinthia , who was crowned emperor by the pope, Hatto went to Rome in 895 and received the George relic from Pope Formosus . In all probability that was the reason for the construction of St. George. After Arnulf's death in 899, Hatto was the guardian of the six-year-old heir to the throne, Ludwig IV. In 911 he crowned Konrad I king of the East Franconian Empire .

Especially through the manuscripts from the 10th and 11th centuries, which represent the Ottonian book illumination in Germany in an outstanding way , the monastery has achieved widespread fame. The Reichenau scriptorium includes the Gospels of Otto III. (Munich) and the Gospels from Bamberg Cathedral , highlights of book illumination . Another evangelist can be seen in the minster treasure .

In the course of secularization , the entire surviving collection of manuscripts passed into the possession of the Karlsruhe Court Library, today's Baden State Library . These include 267 parchment manuscripts , 162 paper manuscripts, 212 fragments and a selection of the incunabula .

The works of the book illumination of the Reichenau monastery were included in the World Document Heritage of the World Cultural Organization UNESCO in 2003. The Lake Constance island of Reichenau was declared a World Heritage Site by UNESCO in 2000 .

From the beginning of the 9th century to around 1100, the inventory of the monastery library in Reichenau was one of the largest in the world. See the graphic about the development of the most important library holdings worldwide from 300 to 1900 . 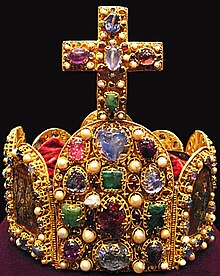 The imperial crown in the Vienna treasury was possibly made by the goldsmiths of the Reichenau monastery.

The abbot from 1351 of the Reichenau monastery, a masterpiece and the oldest dated object of Konstanz goldsmithing is in the Victoria and Albert Museum in London. In the treasure chamber of the cathedral you can find the shrines of the island saints: the Johannes and Paulusschrein, the Fortunatusschrein and the Markusschrein , masterpieces of medieval goldsmith's work.

Apart from four gold discs, including the two-meter-tall Majestas Domini disc from the Konstanz Minster , nothing has survived from the Carolingian or Ottonian times, but sources have come down to works that could have originated here, such as the Petershausen Altar. The description given by Bishop Gebhard , the founder of the Petershausen Monastery (983) in his chronicle, reminds one of the Basel antependium that may have arisen on Reichenau . When Henry II. , Who made the Basel Cathedral, the donation consisted entirely interests on the Duchy of Swabia .

The predecessor building of the Basel Minster , a Carolingian church, the so-called Haito Minster, was built in the first half of the 9th century (805–823) by the Basel Bishop Haito , abbot of the Reichenau Monastery. At the time of Charlemagne, the diocese of Basel experienced its first blossoming under Bishop Haito. Like Waldo , Haito was also abbot of the Reichenau monastery and also confidante and advisor to the emperor, for whom he traveled to Constantinople in 811 as an envoy .

The first goldsmith named is the St. Gallen monk Tuotilo . After a long break, handicrafts shifted to the cities in the Middle Ages, where demand has increased significantly. In Constance, for example, five goldsmiths are known by name between 1222 and 1296, fifteen between 1300 and 1400, 36 in the first half of the 15th century, and another 40 goldsmiths by 1525.