The holy life winter part , page from a manuscript from the Weihenstephan Benedictine Abbey , probably around 1475

In library studies or edition philology, manuscripts or handwriting are handwritten books , letters or other forms of publication (from the Latin manu scriptum , 'handwritten'; abbreviation: Ms. ).

In the strict sense is understood as by manual writing with ink or other coloring agents on papyrus , palm leaves , birch bark , parchment , pieces of wood or paper placed works.

When television and radio reports are made available in printed form or are offered for downloading from the Internet , one speaks of a broadcast manuscript.

The literature of antiquity and the Middle Ages is almost exclusively handwritten on papyrus, parchment and paper.

Texts from the Middle Ages are often summarized in collective manuscripts . The idea of ​​the individual book as a typical form of existence of a “work” as a monograph did not yet exist in its present form. The code was a material storage and decoration form of various written documents. Sometimes the owners of such codices also tried to collect as completely as possible the material or “knowledge” on a certain subject or topic (e.g. courtly knight literature). A well-known example of this is the Ambras book of heroes from the beginning of the 16th century. An example from the middle of the 14th century is the collective manuscript with the signature Ms. germ. Quart. 284 of the Staatsbibliothek zu Berlin , which contains, among other things, two texts of the Tristan material: The Tristan of the poet Gottfried von Strasbourg and Ulrichs von Türheim Tristan continuation. The book Science and the codicology explore the different conceptual or random investment principles of mixed manuscripts and manuscript collections.

Until the invention of printing , manuscripts were the only form of written publication , that is, the texts had to be copied in order to be distributed. This was true from the appearance of writing to the invention of printing by Gutenberg around 1450, i.e. for more than three millennia. If one considers the coincidences of the course of history, the material and the spiritual, and the endangerment of everything written through the centuries, it is astonishing, according to Martin Bodmer , that no more has been lost. Despite the threat from the forces of nature and human work, the greatest spiritual treasures could be preserved, albeit in a roundabout way: there would be no other explanation for the rescue of ancient literature through such heterogeneous intermediaries as the Arab scholars and Christian monks. Your copies have, however, moved us further and further away from the original texts, and astute research is required to restore the real wording from all the fragments that can be understood. Even then, the oldest document is often centuries away from the author. Researching the ways in which a text is distributed is the task of text transmission.

Manuscripts allow various conclusions to be drawn about the creation process and the authenticity of a text. Modern text creation on the computer, on the other hand, often only leaves the finished document as a “speechless document”. 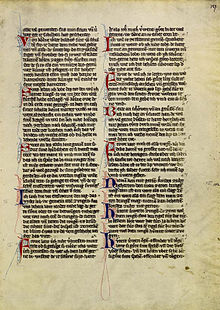 “ Philosophy is enthroned in the midst of the Seven Liberal Arts ” - illustration from the Hortus Deliciarum by Herrad von Landsberg , 12th century

Publishers often require authors to adhere to certain formal guidelines for their submitted manuscripts. A standard manuscript page for example, has 30 lines of 60 characters (including spaces) and should be 1.5 times or double line spacing and a 12- point - font to use. A manuscript written according to these specifications contains around 1800 characters per page, which varies depending on the font.

These strict formal requirements for typescripts are gradually being replaced by precise information on the number of characters and prepared electronic format templates for authors.