The title of this article is ambiguous. Further meanings are listed under book (disambiguation) .

According to traditional understanding, a book (Latin liber ) is a collection of printed, written, painted or blank sheets of paper or other suitable materials, which are bound and usually also with a book cover (cover). According to the UNESCO definition, books are (for statistics) non-periodic publications with a length of 49 pages or more.

In addition, individual are plants or large text sections that are self-contained, as a book called, especially when part of a band are. This is especially the case with ancient works that consist of related book collections - examples of this are the Bible and other normative religious sacred scriptures , the Aeneid, and various ancient and medieval histories.

The book is a cultural product that has the overcoming of illiteracy as a prerequisite and takes the development of the written language as a basis. Its use as a means of communication requires writing or printing skills and reading skills .

Electronically stored book texts are called "digital books" or e-books . Another modern variant of the book is the audio book .

The word book ( Old High German buoh , Middle High German buoch ) was originally a plural form and probably meant first " rune sign ", then more generally "character" or "letter", later "document". A relationship to beech could be based on the fact that runes were carved into beech or beech wood, but this connection is uncertain (see also letter ). The Brothers Grimm see themselves strengthened in the assumption that the origin of the word book comes from beech.

Book production in Europe rose from a few tens of thousands to several hundred million copies from the early Middle Ages to the early modern period .

The oldest forerunners of the book were the papyrus scrolls of the Egyptians , of which the oldest known specimens from the 3rd millennium BC. Come from BC. (See also History of Writing , Ancient Egyptian Literature, and List of Papyri of Ancient Egypt ).

The Greeks and Romans took over the papyrus scrolls until the codex gradually replaced them from the 1st century onwards . The codex consisted of several layers of parchment , which were consecutively described on both sides, folded in the middle and attached to each other with a thread. Only later were the pages bound and given a hard cover. The Codex is the immediate forerunner of our book today.

From the 14th century on, parchment was gradually replaced by the cheaper and much easier to produce paper . The first paper mill in Germany was that of Ulman Stromer in Nuremberg in 1390.

The books printed by Johannes Gutenberg up to 1500 after the invention of the printing press (approx. 1450) are called incunabula or cradle prints (from the time when printing was still in the cradle). During the book printing revolution , the output of books in Europe multiplied.

In Korea , around 200 years before Johannes Gutenberg's invention, letterpress printing with movable metal letters was developed in Europe, presumably as a further development of Chinese printing technology with clay type, but remained little used.

The rapid spread of the new technology throughout Europe and the constant improvement and further development of book printing and the production of paper made books mass-produced, which was an essential prerequisite for the Reformation and later for the Enlightenment . Knowledge became common property in the West .

Writing and image were a unit in the book of the Middle Ages. In the 20th century, Bauhaus artists created books of a high level of design that can be assigned to the field of printmaking. These artist books appear in small limited editions.

The digital printing allowed with book-on-demand requirements in conventional book mold (paperback, hardcover) from a copy upwards. For a few years now, some online service providers have been offering the creation of photo books, which can then be ordered individually. Since 2009, articles on book-on-demand can be summarized in Wikipedia. The digital book has appeared on the online book market since 2000 . The internet also competes with the classic book.

The Internet company Google estimated (as of August 2010) that there are around 130 million different books in the world, but admitted that this was also a question of definition.

The book as a product 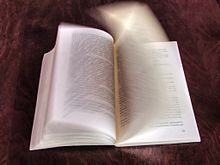 Turning the pages of a book, here a paperback, a small-format book with a usually soft cover

Today the book is primarily an object of daily use. This means that the book is subject to certain conditions of use. The material must correspond to these. It should be durable, tear-proof, flexible, light, aesthetic and much more. Some materials are listed here:

A bound book block , still without a book cover

A book has to be flexible, but also stable. There are many processes involved in book production ; the individual parts are usually manufactured separately and then finally put together.

The "fold-down" to the outside of the cover elements call lid . In the case of bound books, often also called hard covers, a dust jacket is placed around the book cover .

The three edges of the book block at which the book can be opened are called the top cut (top), front and bottom cut . A colored cut has cut decorations .

The book design conceives the entire appearance, structure and materials of the book. It is usually carried out by a book designer, artist and / or typographer . In addition to the font , front cover , pagina , type of paper , ribbon bookmark and headband , the cover is also designed - probably the most important task today: the cover must arouse curiosity, be exciting and attract attention. The binding should invite the potential reader to buy or rent.

Economics of the Book

Considered as an economic product, the book has several special features.

These peculiarities make the book a speculative economic good with high risks for the producer (publisher). In contrast to other media products, the book is usually only refinanced through one source of revenue, the sales revenue. As an advertising medium , the book only plays a subordinate role.

Differentiation by type of production 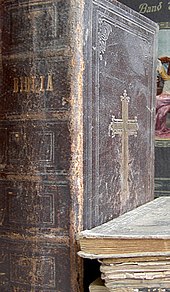 Old books in the library of Merton College

The sections of a book include (partially optional, the order can also vary):

Book ownership and reading in Germany

The Bible is the most printed and widely distributed book in the world. According to the German Bible Society , translations of the entire Bible are available in 542 languages ​​and partial translations in 2344 other languages ​​(as of January 2015).

At least the information that the Mazda illustrated book is the largest book in the world seems out of date [1] .

The smallest book in the world comes from the Leipzig publishing house Faber & Faber . At 2.4 by 2.9 millimeters, it is comparatively the size of a match head. The 32 pages are printed with letter images in offset and leather-bound by hand.

The word formation element Biblio- (or in the case of adjectives biblio- ), which comes from the Greek, means “book” or “books”. Examples:

Future of the book