Under Benefits ( English utility ) is understood in economics , the degree of satisfaction of needs that the economic agents from the consumption of goods and services produced.

Private households , companies , other associations of persons and the state with its subdivisions ( public administration , public companies and municipal companies ) come into consideration as economic subjects that can achieve a benefit . What is required is that these economic agents must meet their needs by consuming goods and services in order to be able to obtain a benefit from them. That is the only with that in private households exclusively the case, while companies operating function of the procurement of raw materials , consumables and supplies can realize. The products and services acquired create a benefit if they serve to satisfy the needs of economic subjects. The benefit arises from the connection between the properties of a consumer good and the consumer's intended purpose . While companies pursue the goal of profit maximization , private households pursue utility maximization . Profit maximization can be in the form of profit quantify the benefit, however, is highly subjective ( english customer benefit ), and depends primarily on whether product or service contributes to the realization of individual value systems. Therefore, the ordinal utility is limited to the formation of a ranking with regard to the importance of various goods and services for a consumer:

The good therefore creates more benefit than good and this in turn more than , etc. These rankings can be different for each consumer depending on preferences . 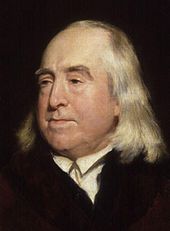 Based on the philosophical - ethical direction of utilitarianism , its basic category “benefit” has found its way into modern economics on a broad front, such as in cost-benefit analysis . The word "utilitarianism" is derived from "benefit / advantage" ( Latin utilitas ), on which the English technical term ( English utility ) is derived. One of his first representatives was Jeremy Bentham with the cardinal utility theory (utility as a metric quantity), as it was expressed in his 1789 book "An introduction to the Principles of Morals and Legislation". In 1854, the German economist Hermann Heinrich Gossen set up rules in his work "Development of the Laws of Human Intercourse and the Rules for Human Action Flowing from it", which were ignored for a long time and were only later referred to as Gossen's Laws or " Laws for the satisfaction of needs". The core of the work is the law of decreasing marginal utility within the framework of cardinal utility theory. According to this, the benefit of the last unit of consumption is the lower, the more of a certain good has already been consumed ( first Gossen's law ). The second Gossen'sche Act deals with the question of how the consumer be income , given market prices so divided on various goods that he utility maximization can achieve. According to Gossen, however, benefit is not only a problem of the intensity of the enjoyment, but also of the time in which this benefit is enjoyed. William Stanley Jevons (1871), Carl Menger (1871) and Léon Walras (1874) succeeded in making significant further developments in the cardinal utility theory . They assume that each individual can compare different levels of benefit using a cardinal scale. The cardinal doctrine of utility assumes that utility is just as measurable as weight, for example . In 1881 Francis Ysidro Edgeworth proposed the hedonimeter , a utility or happiness meter, which should work on the basis of physiological parameters , but remained scientifically irrelevant. Edgeworth argued that benefit because of the atoms of enjoyment ( english atom of pleasure ) or by the just noticeable increase ( english just perceivable increment is measurable). In 1890, Alfred Marshall saw the benefit as a function of the price of a good, irrespective of whether the benefit could be measured objectively or only subjectively from a good.

The greatest weakness of the benefit considerations so far is the fact that a subjective quantity such as benefit cannot be expressed in numbers, as was the view of the cardinal benefit theory. In the modern ordinal utility theory the investigation was limited to the establishment of rankings . This ordinal utility theory developed in 1906 by the Italian economist Vilfredo Pareto , according to whose Pareto optimum the welfare state resources are distributed in such a way that the current situation can no longer be improved for at least one actor and the satisfaction of needs has not deteriorated for the rest. With his “Theory of Election Acts”, he developed an ordinal measurability of utility using indifference curves . The ordinal utility theory, in contrast to the cardinal one, only requires an individual ranking of the utility characteristics through different goods. According to the ordinal utility theory, each individual can specify a ranking of the individual utility values ​​for himself, but without being able to put an exact figure on the difference in utility values. Paul Anthony Samuelson found out in 1937 that when a certain bundle of goods is preferred to another, that the preferred bundle of goods creates a greater benefit. This benefit is also referred to as the decision benefit. According to the hedonistic concept, one speaks of the experienced benefit . In 1940 Wilhelm Vershofen developed a benefit scheme to describe the importance of consumer goods for the consumer.

Based on the of in 1738 Daniel Bernoulli developed Bernoulli principle was created by John von Neumann and Oskar Morgenstern , the 1944-1947 expected utility theory , which is the basis of rational action in decisions under risk forms. According to her, the expected utility in decisions should be maximized. They expanded the concept of benefit to include the uncertainty that the condition that triggered the benefit will occur in the future. John von Neumann and Oskar Morgenstern have hereby proposed a way of deriving the cardinal use of these goods from the ordinal use of two goods. For this purpose, a lottery is recommended to the individual , in which good A or good B can be won with a certain probability. If the individual makes decisions between two such lotteries with different probabilities , a cardinal expected utility of both goods can be derived from the series of decisions made . Cardinal utility values are also found in the random utility theory ( English random utility theory ), for example, Daniel McFadden in 1973 for the analysis uses consumer choices. In 1979, Daniel Kahneman and Amos Tversky presented an alternative to the expected utility theory with their prospect theory .

A distinction is made between utilitarian, hedonistic and symbolic benefits:

Because of the different objects of knowledge , the concept of utility is used differently in both sciences .

The economics grabbed the benefits first and examined him comprehensively in terms of its importance for the economic agents. The endeavor of households to maximize utility is one of the central assumptions of economics. In the private household , according to the rational principle, the given income is to be divided between goods and services in such a way that the household benefits can be maximized and the household optimum is achieved. At a certain level of consumption usually saturation, which occurs marginal utility ( English marginal utility ) is zero or even negative; this is the content of Gossen's first law. Certain of preferential relations rankings of goods, an order of preference are derived. Under idealizing assumptions about the nature of human preferences (e.g. saturation with increasing endowment with a good) and using idealized production functions, neoclassical economics draws conclusions with regard to prices, supply and demand, production and consumption. The microeconomics lives from the realization that the market equilibrium utility maximization prevails. This state of equilibrium is at the same time Pareto-optimal, since it is such that no individual can be better off without making another individual worse off (normative-evaluative use of the concept of utility).

Benefit scheme of the basic benefit and additional benefit factors

The business administration examines the benefit especially with the help of the cost-benefit analysis ( English cost-benefit analysis ), which had its origin around 1844 in France. The French road and bridge construction engineer Jules Dupuit was already planning his projects here according to benefit and cost criteria. The cost-benefit analysis is now mainly used in the public sector by public companies and municipal companies , since according to § 7 BHO and § 6 Abs. 1 HGrG and the identical provisions of the LHO, the principles of economic efficiency and economy must be observed. The utility analysis is an analysis method of decision theory that plays a role in investment calculations.

Business administration also examines the customer benefit in its forms of functional (basic function of the product), economic (efficiency in product use), process-related (handling of a product), emotional (triggered feelings of the customer) and social benefit (feelings in the social customer environment). The company must strive for a positioning that makes its product appear unique from the customer's point of view. The economic benefit concept is z. B. used for research on purchasing behavior or product design .

The benefit represents the core of economic theory and thus of economic action and is therefore one of the central economic constructs. Up until the late 19th century one assumed the cardinal measurability of utility, modern utility theory is limited to scalable rankings of useful goods and services that are not interpersonal comparable. The results of the theory of utility are applicable in everyday life and widespread, because consumer decisions are always based - more or less - on utility considerations. These take into account the utility value as well as the utility value of a good. In questions of utility, comparability plays a role, the feature of cardinal scaling ; Strictly speaking, we live in a cardinally scaled world. Other economic agents also take questions of utility into account to a large extent and apply the utility value analysis.