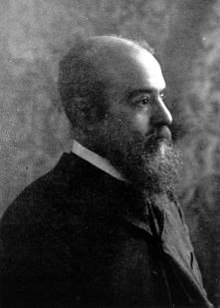 He is regarded as a representative of the Lausanne School of Economic Neoclassical and made a name for himself as the founder of welfare economics . The Pareto distribution , the Pareto diagram , the Pareto optimum and the Pareto principle ( 80:20 rule) are named after him. He turned to sociology and worked on the subjects of ideology criticism , political system change ( revolution , evolution ) and the elite cycle .

Pareto was born in Paris in 1848 as Wilfried Fritz Pareto. His parents were Marquis Raffaele Pareto, a noble Italian emigrant who came from a Genoese merchant family and a colleague of Mazzini , and the French Marie Méténier. He received his name Wilfried Fritz in allusion to the German Revolution of 1848/49 . The Paretos family moved back to Northern Italy in 1858.

In 1870 Pareto completed his engineering studies at the Politecnico di Torino . He worked first for a railway company, then for an ironworks. In 1889 he married the Russian Alexandra Bakunin (1860–1940). In 1890 he began correspondence with Maffeo Pantaleoni , then director of the business school in Bari, and later professor at the universities of Rome, Naples and Genoa.

In 1893 he was appointed to the Chair of Economics at the University of Lausanne . There he took over from Léon Walras, who was strongly mathematically oriented . There he became a co-founder of welfare economics . In 1896 Pareto discovered that the distribution of income does not follow a normal distribution ; rather, he realized that it is usually skewed to the right . The Pareto distribution (1897) is named after him.

Vilfredo Pareto, a polemical but well-phrased analyst, is considered an eminent early non- Marxist sociologist. His scientific and technical methodology can be clearly seen in his works right through to the end. He published his work initially in French, later more and more frequently in Italian.

His main sociological work is the Trattato di sociologia generale , which explains the entire scope of Paretos' sociological theory in four volumes with a total of 2612 paragraphs:

Pareto's critique of ideological phenomena has received much attention . He differentiates between six residuals ( inductively determinable psychological motivational complexes) of an action, which can no longer be split up, and derivatives (pseudo-logical explanations of an action).

The theory of the elites forms the core of his sociology: By “ elite ” he initially understands a ( value-neutral ) functional concept of “the best” in a category of action - these could be politicians or scholars, athletes or courtesans. “Elite” therefore by no means only refers to those in power. Occasionally he used the term " aristocracy " as a synonym . Pareto understands history generally and without exception as the cemetery of the aristocracies : He describes the change of elites and thus the conditions of an evolutionary or revolutionary change of political rule with great precision. He developed the scheme of the eternal cycle of the elites, which is still used today - new, productive ranks of leadership displace the old, worn ones. In Pareto, even in revolutions, an “elite” is always replaced by a “reserve elite”, but never by a mass ; regardless of this, a new elite likes to appeal to the masses or claim to belong. According to Pareto, a sentence like The people rules is a typical derivation (pseudo-logical explanation).

According to Pareto, it is a fact that people are physically, morally and intellectually different. He divides society into two layers:

Reception of the sociological work

Pareto's concept of “derivation” was taken up in psychology under the term “ rationalization ”.

The French sociologist and philosopher Raymond Boudon understands Pareto's view of non-logical action as an indication that sociology should go beyond the economists' narrow concept of purposeful rationality.

Pareto is often seen as leaning towards Italian fascism . This is related to an appreciation of Pareto by the Italian economist and staunch fascist Luigi Amoroso in the Giornale degli economisti , who called Pareto a fascist. Therefore, Pareto is still considered to be an important forerunner of Fascismo . However, this view is controversial; so sat z. B. Max Weber with a Caesarian form of democracy , but with a strong parliament, apart. Benito Mussolini himself saw Pareto as an excellent teacher.

Marxists, to whose ideology-critical approaches many Paretian parallels can be established, displeased his cynical and skeptical features towards them too: Pareto was a " Marx for citizens".

In his work Modern Machiavellism , the political scientist and historian Erwin Faul wrote about Pareto in 1961: [D] essen sociological writings seem like a culmination of modern political disillusionment . During the German student movement in 1967, the political scientist Johannes Agnoli saw a recommendation from Pareto to Mussolini to secure rule as an explanation for the transformation of democracy that, in his opinion, was emerging in many countries in the West . B. through democratically illegitimate discourse and decision-making institutions:

“In 1922 Pareto had given Mussolini the advice to stabilize power in order to keep the parliament alive in a modified form: masses who lean towards democratic feelings can best be neutralized by an organ that gives them the illusion of participating in the state Conveys power. It is not the complete abolition of parliament that makes the New State strong, but the transfer of decision-making powers from parliament to the narrower circle of "elites" that do not meet in public. "

The political philosopher Hannah Arendt stated in her book Macht und Demokratie (Power and Violence) , published in 1970, that only a few authors of rank, like Pareto, had glorified violence for its own sake, harbored a deep hatred of society and broke its moral code. One can learn a lot from Pareto about the motives that led people in the twentieth century to adopt theories of violence.

In 2002, the sociologist Gert Albert saw Pareto's theory of action as a “ hermeneutic positivism ” through the combination of an externalistic and an internalistic component .

In Germany, the economist and sociologist Gottfried Eisermann and the sociologist Maurizio Bach are recognized Pareto experts.