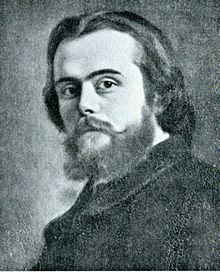 Marie-Esprit-Léon Walras (born December 16, 1834 in Évreux , Normandy , † January 5, 1910 in Clarens , now Montreux , Switzerland) was a French economist . He founded the Lausanne School and is considered to be one of the leading representatives of neoclassics and the originator of the general model of equilibrium .

Léon Walras was the eldest of four children of Antoine-Auguste Walras (1801–1866) from Montpellier and his wife, the notary's daughter Louise Aline de Sainte Beuve (1811–1892), from Évreux. As his father rose from teaching to professor of philosophy , Léon Walras spent his childhood and youth in Paris and several cities in northern France, where he attended the College in Caen from 1844 to 1850 and then the Lycée in Douai . In 1851 he graduated from Bachelier-ès-lettres. After attending further courses in general and special mathematics over a year each, he graduated from the Bachelier-ès-sciences in 1853 . In the entrance examination (Concours) for the École polytechnique in Paris, he failed twice. “His course shows the practical ineptitude of the thinker; Failures such as are to be expected when preparing for the École polytechnique by studying Descartes and Newton ; Reluctance to go on the beaten track, as every student feels. ”He read Cournot's Recherches sur les principes mathématiques de la théorie des richesses (English:" Investigations into the mathematical principles of the theory of wealth ") and Lagrange .

When he returned to the capital to study in 1853, social and cultural life was still shaped by the revolutionary ideas of the 1848s . This lifestyle and this attitude of the so-called bohemians also influenced Léon Walras. During and after his studies in Paris, he led a relatively unconventional life. Since he was not accepted at his favorite university, he began studying engineering at the École des Mines in 1854 . But he quickly realized that he had little interest in engineering. Therefore, he neglected his studies and occupied himself more with literature , philosophy , history , art criticism and literary criticism as well as economic policy and social science . It is not clear whether he still got an engineering degree.

Léon Walras frequented intellectual circles in Paris and tried his hand at writing a novel. The novel Francis Sauveur , published in 1858, depicts the life of a student in Paris in the 1850s and is said to have strong autobiographical features. Leaving university was not welcomed by his parents, especially his father. They had hoped that their son would make a career as a mining engineer. In a conversation Léon Walras described as very formative, Auguste Walras made it clear to his son that he had to continue at least his father's economic and social science work. Therefore Léon Walras tried to establish himself in the years 1859 to 1862 with the journalistic work for the Journal des Economistes and La Presse . He used his father's arguments to refute the guiding ideas of Pierre-Joseph Proudhons . In 1859/60 he wrote his first economic work: L'économie politique et la justice; Examen critique et réfutation des doctrines économiques de MPJ Proudhon précédés d'une introduction à l'étude de la question sociale. With this essay he took part in a competition at the international tax congress in Lausanne in June 1860 and won the fourth prize.

In the same year he began to publish his planned six-part series of articles Paradoxes Économiques in the Journal des Economistes . The first part of Paradoxes économiques I (Que le sens commun n'est point le critérium de la science en général, ni en particulier celui de l'économie politique) described a discussion between a businessman and an economist about various practical problems, such as the Free trade or taxes . The second part of the series was already written when the author fell out with his editor, so that any further article was rejected. After he could no longer publish in the Journal des Economistes , Walras also resigned from La Presse.

His endeavors to find a university lecturer in economics in France failed. The eleven French chairs for economics were held by Orthodox economists and, according to Walras' own statement, were only passed on through nepotism. His endeavors to publish his own newspaper on politics and social sciences were also unsuccessful because he did not receive government approval. Léon Walras used his father's acquaintance with Horace Say, the son of Jean-Baptiste Say , to find a job in the administration of the Chemins de Fer Du Nord railway company . Léon Say , the son of Horace Say and later Minister of Finance, was one of the directors of the railway company in 1862. Léon Say later helped him to a position on the board of directors of an exchange bank. From 1865 to 1868 he was responsible for the bookkeeping there and was therefore also able to publish articles in the cooperative magazine Le Travail , which is financed by the bank . After the bank was liquidated at the end of 1868, he got a job in the office of banker J. Hollander.

Walras lived with his first wife Célestine Aline Ferbach (1834–1879) for over ten years before marrying her in 1869. With this marriage, his twin daughter Marie Aline, born in 1863, was legitimized, while her twin sister had already died in infancy. Léon Walras adopted after he had married Célestine, their son Georges (1857-1934), who came from a previous illegitimate relationship. Célestine Walras died in 1879 after a three-year illness. To cover the cost of the treatment, Léon Walras went into debt considerably. His financial situation only improved in 1884 when he married Léonide Désirée Mailly (1826–1900), as this brought an annuity into the marriage. In 1892, after the death of his mother, Walras received an inheritance of 100,000 francs with which he could pay his debts and buy his own annuity.

The decisive turning point for Léon Walras' career came in 1870. The government of the Swiss canton of Vaud invited him to take part in the concours for the newly established chair of political economy at the University of Lausanne . Those in charge still remembered his contribution to the tax congress in 1860. Since the seven-member appointment committee consisted of three members of the cantonal government and Léon Walras was able to impress one of the four economic policy professors positively, he emerged as the winner of the concours.

The first years in Lausanne were his most productive. He went back to the core statements of his father's economic theory that scarcity and utility were the source of value and that mathematical aids should be used. He also included Cournot's work in his considerations. His father had already tried to sketch a theory, but only Léon Walras was able to formulate it. His most important works were created in the 1870s. In 1874, the article Principe d'une théorie mathématique de l'échange (about the principle of a mathematical theory of exchange ) appeared in the Journal des économistes, after it had already been rejected by the editor the year before.

In 1874 the first edition of his most important work was published, the Éléments d'économie politique pure, ou théorie de la richesse sociale (in English: Elements of Pure Economics, or the Theory of Social Wealth , German: Mathematical theory of price determination of the economic goods ). They consist of the principle of a mathematical theory of exchange from 1873, the equations of exchange from 1875 and the equations of production, equations of capitalization and credit from 1876. Ludwig Gebhard von Winterfeld (1853–1904), A Prussian officer first translated this work into German in 1881 when he was in Lausanne in the winter of 1880/81.

From 1874, Léon Walras also made contact with a wide variety of economists of his time, including William Stanley Jevons , Antoine-Augustin Cournot , Alfred Marshall , Carl Menger , Philip Wicksteed , Francis Ysidro Edgeworth , Vilfredo Pareto and Knut Wicksell . He wanted to make his ideas known and saw the way to get in touch with the great economists of his time. The attempts to establish his ideas and insights, especially monetary theory, in France were not very successful.

In order to be able to pay the high medical costs for the treatment of his wife Célestine, he had to pursue other occupations in addition to his work at the university. He gave tutoring, wrote articles under a pseudonym for the Gazette de Lausanne and the Bibliothèque Universelle, and was also a consultant for the insurance company La Suisse . 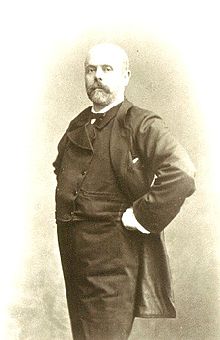 After his inheritance in 1892, Léon Walras originally only wanted to retire from teaching for a year in order to overcome his health problems, but he never returned to teaching. He continued to work as an honorary professor for the University of Lausanne, but did not have to give any lectures. Vilfredo Pareto took over his chair at the university . His other scientific work was then less innovative than editorial, despite numerous publications. Léon Walras' political interests corresponded to those of his father, such as the ideas for reforming the tax system and land nationalization. With Études d'économie sociale; Théorie de la répartition de la richesse sociale , Léon Walras published in 1896 a collection of his thirty years of articles and readings on social policy. In 1898 he published in Études d'économie politique appliquée; Théorie de la production de la richesse sociale a collection of his newspaper articles and readings as well as correspondence on economic topics. Using the example of the stock market , he formulated the Walras law named after him . He published the Éléments d'économie politique pure, ou théorie de la richesse sociale , in four revised editions up to 1900. He was extremely proud of his membership in the scientific societies in Europe and the USA, and on June 21, 1909, when a bronze bust was erected, he was honored for his 40th anniversary in service at the University of Lausanne.

Walras developed the concept of marginal utility ("rareté" in Walras) at the same time, but independently (this independence is disputed) from Stanley Jevons and Carl Menger .

His main achievement was the development of a general equilibrium model of the national economy. Any number of households and companies operate in any number of markets. Walras suspected the existence of a price system with the property that supply and demand coincide in all markets at the same time. This assumption was only formally proven later by Abraham Wald and in the context of the Arrow-Debreu equilibrium model .