The outstanding event of 1910 was the overthrow of the monarchy in Portugal . The last king, Manuel II, has to leave the country. However, the newly founded First Republic does not succeed in achieving stability in the next few years.

Also in Mexico , under the leadership of Francisco Madero, a revolution breaks out against the long-term president Porfirio Díaz and there are uprisings against the colonial rulers from Europe in several colonies in Africa, Asia and Oceania. 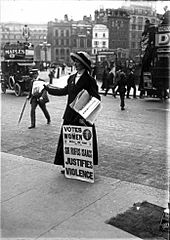 Even the otherwise very stable Great Britain is experiencing troubled times: Because of the social program of the liberal government under Prime Minister Herbert Henry Asquith and Finance Minister David Lloyd George , there is a power struggle between the two houses of Parliament, King Edward VII dies and is given over to his son George V. . heir, suffragettes demanding more and more vehemently the women's suffrage , and in November it comes to Tonypandy Riots of miners in Wales.

With a telegram from Roald Amundsen to Robert Falcon Scott , the "race to the South Pole " between the British Terra Nova Expedition under Scott's leadership and the Norwegian Fram Expedition under the leadership of Amundsen begins . And a Japanese expedition led by Shirase Nobu is also setting out for Antarctic waters during this “ Golden Age of Antarctic Research ” .

Cultural highlights of the year are the world premiere of a late opera by Jules Massenet , Don Quichotte , in Monte Carlo based on the novel of the same name by Miguel de Cervantes and Igor Stravinsky's first success, the ballet The Firebird , performed by Sergei Pavlovich Djagilev's Ballets Russes in Paris. 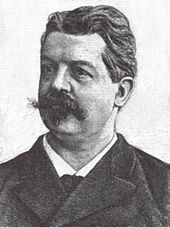 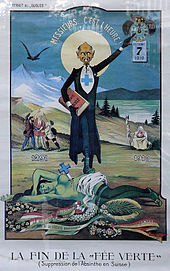 Poster criticizing the absinthe ban in Switzerland, around 1910 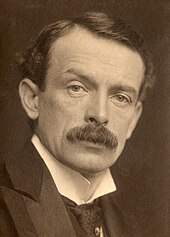 On Black Friday: A police officer tries to snatch a banner from a suffragette.

The end of the monarchy in Portugal 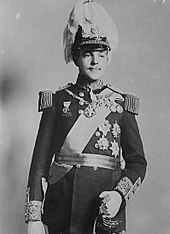 Two years after the murder of his father Karl I and his brother Ludwig Philipp , the young King Manuel II of the House of Saxe-Coburg-Gotha, despite his policy of calming down , in the course of which most of the authoritarian measures of his predecessor were withdrawn, failed to stabilize the unpopular monarchy in Portugal . Governments take turns in quick succession. The Prime Minister, Francisco António da Veiga Beirão , who was sworn in on December 22nd of the previous year, fell on June 26th over a scandal at the Credito Predial bank in which several members of his government were involved. His successor is the previous Minister of the Interior, António Teixeira de Sousa . 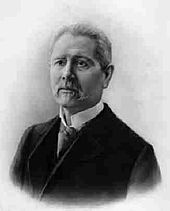 In the parliamentary elections on August 28, the Republican Partido Republicano Português ( PRP ), which has been campaigning for the abolition of the monarchy with armed force since the beginning of the year, achieved a historic success. Among others, Teófilo Braga and Miguel Bombarda are elected to the Cortes .

Bombarda, a psychiatrist and thought leader of the republican movement, is murdered on October 3rd by a mentally ill former patient. The act of violence probably has no political background, but on the same night it led to uprisings against King Manuel II and the Portuguese monarchy.

Two days later, the first Portuguese Republic is proclaimed. King Manuel II , who had been forced to flee Lisbon by the military the day before, leaves the country and is exiled in England on October 17th. Teófilo Braga becomes the first president of a provisional government in the country. The well-known writer and intellectual tries to form a non-partisan government.

The new government is strictly anti-clerical and secular and begins with a radical separation of church and state . All Jesuit monasteries are closed, the prisons in Lisbon are filled with Catholic priests and friars. Religious instruction is forbidden, as are all religious references in state acts, and the titles of nobility are abolished. The apostolic nuncio leaves Lisbon in protest. Wearing religious habits in public is forbidden, and civil marriage and divorce are introduced. Despite the initial euphoria, the republic was marked by a great deal of political instability in the years that followed. 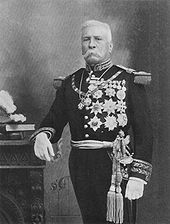 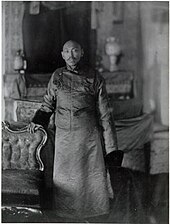 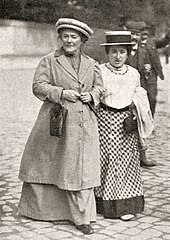 Globos aerostáticos in the 'Railways and Transport' pavilion

From May to November in the Argentine capital Buenos Aires , the Exposición Internacional del Centenario instead. The timing of the exhibition is intended to commemorate the May Revolution of 1810. The exhibition is about agriculture and livestock, industry, rail and land transportation, hygiene and the fine arts. Among other things, the area of ​​the agricultural exhibition La Rural , which has been taking place since 1886, is also used. There are also numerous pavilions for the individual Argentine provinces. The exhibiting countries include Germany, England, Italy, Austria-Hungary, Paraguay, Switzerland and Spain. In keeping with the zeitgeist, Art Nouveau plays a major role in the design of the exhibition buildings. A number of young Italian architects stayed in Buenos Aires after the exposition ended. Some of the buildings they built are still important for the cityscape there. On the occasion of the exhibition, the Transand Railway between the cities of Los Andes in Chile and Mendoza in Argentina will be officially opened on May 25th after more than twenty years of construction. 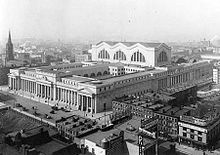 The reception building of the "Penn Station" built by the architects McKim, Mead, and White in the Beaux Arts style

The race to the South Pole

The Terra Nova in December, taken by Herbert Ponting

During the so-called " Golden Age of Antarctic Research ", the Fifth French Antarctic Expedition is returning home with the ship Pourquoi-Pas IV under the direction of Jean-Baptiste Charcot , who had been in the Antarctic since 1908 and carried the Bellingshausen- lake and the Amundsen sea researched and the Marguerite Bay and Charcot island has discovered. 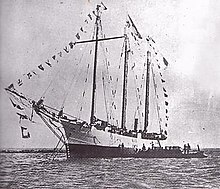 At around the same time, the ship Kainan Maru, under the command of Shirase Nobu, leaves the port of Tokyo for Antarctica on December 1 . This is how Japanese Antarctic research begins . The expedition lasted until June 20, 1912.

Knud Rasmussen and Peter Freuchen found the Thule trading post in Uummannaq near Cape York in northwest Greenland . They want to enable the polar skimos living in the region to continue their trade in fur on fair terms after the end of Robert Peary's regular presence for two decades . At the same time, Rasmussen wants to use the station as a starting point for expeditions of an ethnographic and geographical nature, for the financing of which the profit is to be used. 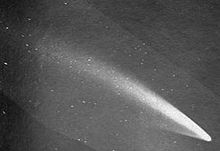 The structure of the Millikan experiment 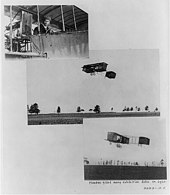 Harry Houdini in his Voisin double-decker 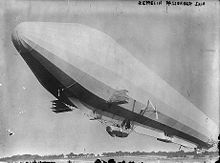 Geo Chavez in his Blériot 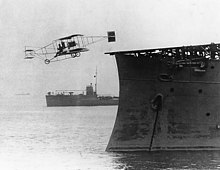 The start of the USS Birmingham

Advertisement for the performance of Abysses in Copenhagen

Léon Bakst : Figurine for The Firebird

Rehearsal for the world premiere of Mahler's 8th Symphony

The photo from the "Daily Mirror": The "Oriental delegation" during the dreadnought prank 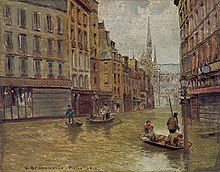 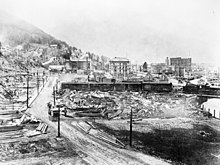 The town of Wallace, Idaho after the Great Fire

Largest cities in the world around 1910 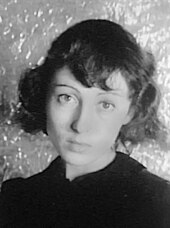 Luise Rainer in a portrait from September 2, 1937

Irene Seiler during her testimony in the Nuremberg legal process on March 26, 1947 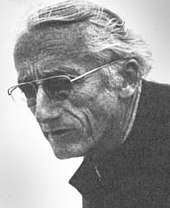 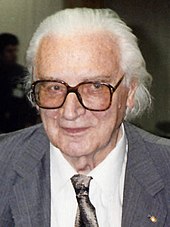 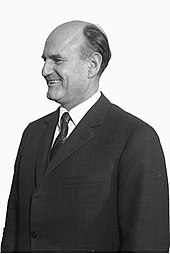 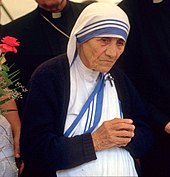 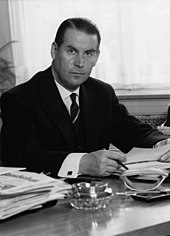 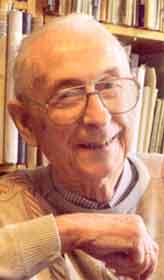 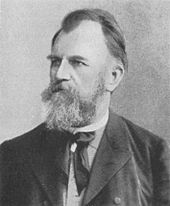 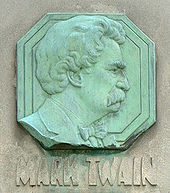 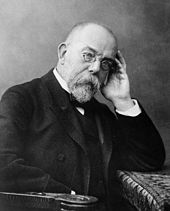 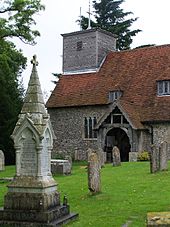 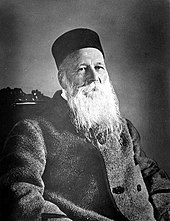 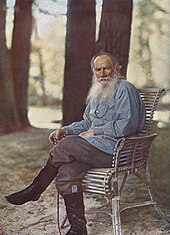