The Chinese New Year , Chunjie ( Chinese 春節 / 春节, pinyin chūnjié  - " Spring Festival "; also農曆新年 / 农历新年, nónglì xīnnián  - "Farmer's Calendar New Year" or過年 / 过年, gùo nián  - "New Year's Eve"), is considered to be the most important traditional Chinese holiday and is one of the Asian Lunar New Years . New Year's Day, the date of which is calculated according to the traditional Chinese lunisolar calendar , falls on oneNew moon between January 21st and February 21st. The year of the Metal Ox began on February 12, 2021 and lasted through January 31, 2022. On February 1, 2022 began the year of the Water Tiger .

The New Year is celebrated primarily in East Asia ( Chinese culture , Korea, Mongolia, Okinawa, Vietnam, until 1873 in Japan), but also worldwide in areas with a large proportion of overseas Chinese ( Thailand , Singapore, Malaysia, Indonesia , Philippines or overseas) . These are mainly special districts, the Chinatowns , which have often developed their own New Year tradition as part of their political, geographical and cultural distance from China, especially as a result of the Cultural Revolution .

Other ethnic groups, such as Mongolians , Koreans , Miao , Vietnamese , Bhutanese and some ethnic groups in Nepal , which were culturally, religiously or linguistically influenced by China, have also adopted certain elements or the date of the Chinese New Year celebrations. The customs can therefore prove to be very different from region to region. In Tibet , the Lunar New Year is usually celebrated one new moon later than in the rest of China. Since the festival is celebrated in a wide variety of countries and is based on the lunisolar calendar, it is also called the Lunar New Year , which is the original name in Chinese.

Chinese New Year is a clan and family celebration . Since there are a large number of overseas Chinese and more and more family members are living apart from their families as part of the labor requirements of the southern China coastal areas, the largest regular migration movement in the world begins every year on the occasion of this festival. The Chinese working away from their home areas usually save their entire annual holiday entitlement in order to be able to stay away from work for at least two weeks, if not more, for the Chinese New Year. A side effect of this migration is that clan interests are then discussed at home and sometimes other job opportunities are offered. This is a fixed calculation factor, e.g. B. at construction sites throughout Southeast Asia.

The Chinese, and also Vietnamese, New Year celebrations occur between January 21 and February 21, on the second (very rarely the third) new moon after the winter solstice . New Year's Day is shifted from year to year by about 11 days to an earlier date; if this results in a date before January 21st, a leap month is inserted and the date is shifted back by approx. 19 days instead.

According to Chinese astrology , the New Year festival is associated with the cyclic change between the twelve different branches of the earth : The year of the tiger begins with the Chinese New Year of 2022 . In addition, through a combination with the ten heavenly stems , a sixty-year cycle is run through. With the heavenly stem "water and yang", this results in the year壬寅, rényín (number 39) of the 78th sixty-year cycle of the Chinese calendar.

A comprehensive list of the dates of all New Year's days between 1900 and 2080 and their assignment to zodiac signs and elements is available at Chinese New Year Dates, with the more recent dates listed in the table below.

The articles Chinese New Year#Mythology and Lion Dance#The Legend overlap thematically. Information you are looking for here can also be found in the other article.
You are welcome to participate in the relevant redundancy discussion or help directly to merge the articles or to better distinguish them from each other (→  instructions ).

An old legend has it that a man-eating monster came down from the mountains (or the sea, depending on the source) annually to satiate its hunger after deep sleep. To protect themselves from the "Monster of the Year" (年獸 / 年兽, Niánshòu ), people made noise and fire and colored everything red and gold, since the monster was said to be sensitive to noise and the colors red and gold. The expulsion of the monster is called "Guònián", leaving of the "Nian or year monster" (過年 / 过年), which means the leaving of the old year, i.e. the New Year festival.

The legend of the lion dance (舞龍 / 舞龙, wǔlóng  – "dragon dance") refers to the then emperor of the Qing dynasty , Qianlong (Ch'ien Lung). One night he had a strange dream. He dreamed of a mythical creature with a horn protruding from the center of its head, standing opposite him. The Emperor felt frightened, but the creature just looked at him and with a twinkle in its eyes was gone. The Emperor immediately summoned his scholars and servants the next morning and began investigating the meaning of the dream and the being. His subordinates finally came to the conclusion that the creature could be a lion and that it wanted the emperor to understand that he was equal in rank to the emperor. From then on, the emperor called this lion Ruishi (瑞獅 / 瑞狮, ruìshī , English Imperial guardian lions  – “ lucky lion ”) Some time later, the residents of the city of Lingnan in Guangdong province created a new lion, which they called Fushan Shi . Now, in order to bring this lion to life, different martial arts practitioners experimented with different choreographies of dance steps to accomplish this task. After some time, an independent form of dance emerged, which is still known today as the "Lion Dance".

Various greetings are used for the New Year:

恭喜, gōngxǐ is another expression for恭賀 / 恭贺, gōnghè and stands for "congratulations or congratulations" and發財 / 发财, fācái means "monetarily successful" or "come to prosperity and wealth". So together, “Congratulations for success and prosperity in the new year”. This greeting is used when wishing others a prosperous year and happiness; it is more common in southwestern China and especially in the Canton and Taiwan area. 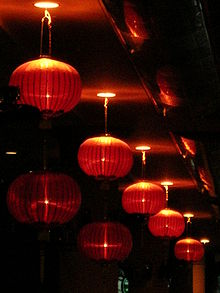 Red lanterns as a symbol of good luck

The preparations for the New Year celebrations begin long before the date, usually within a period of two weeks. In the People's Republic of China, the Lunar New Year includes three public holidays, but traditionally there are fifteen, and five to eight days off are usually taken. The conclusion is celebrated on the 15th day of the New Year with the Lantern Festival . The New Year is celebrated with fireworks , dragon and lion dances and is typically accompanied by mahjong games.

Traditionally, on the 20th day of the eleventh month, the house is cleaned with bamboo branches and then decorated. The numerous lamps and paper ribbons ( duilian ) are usually colored red and all kinds of New Year's sayings are inscribed in black ink. In China, red stands for luck, joy and prosperity. Red also plays a role in relation to the annual demon nian , because according to legend, he terrorized a village every New Year's Day and was finally driven away by red paint, lamps and noise. Gold-colored lucky symbols are also attached to the walls. The banners are hung on the door and turned upside down. In general, everything is renewed before the New Year: people repaint walls, buy new clothes, visit the hairdresser and do preparatory shopping.

Among the many mostly regional rituals is the sacrifice of mostly sweet-glutinous rice to the kitchen god (灶君, Zao Jun ). According to legend, he leaves the house seven days before the New Year celebrations to report to the heavenly Jade Emperor about the events of the past year. Because of the sweet rice, he should only be able to report positive things, and he finally returns to the house four days after the New Year's festival, where he is welcomed with fruit and tea.

No well water may be drawn on New Year's Day itself, in order to give the well god rest. However, this tradition is in decline due to increasing modernization of the water supply.

Last day of the year 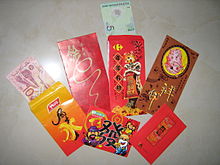 At the latest on the eve of the New Year (除夕, chúxī  - "Chinese New Year's Eve"), the family comes together for a rich feast, traditionally with chicken and fish, which is not eaten completely. The word for "fish": yú 魚 / 鱼is homophonic to the word for "abundance": yú 餘 / 余, which ultimately implies "prosperity" - this should not be used up accordingly. Gifts of money packed in red envelopes, called hóngbāo in Mandarin ( Cantonese laisi / lai si , Hokkien angpow / ang pow ), are distributed to the children, whereby the amount of money is of great importance. Also jiǎozi have to be prepared for the next day. Before the new year begins, between 11 p.m. and midnight, people leave the house, taking the traces of the old year with them, but then return to open the windows and thus let in the happiness of the new year. After 11pm the fireworks also start and last until late the next morning. It is banned in many cities due to the risk of fire. 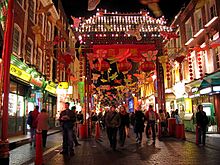 The first day of the new year (正月初一, Zhēngyuè Chūyī ) is also celebrated with the family. You meet in the morning, greet your parents with a New Year's blessing and a compliment. Red envelopes are then distributed to unmarried members of the family, and more rarely to unmarried guests, if this has not already happened the evening before. Important here is the commemoration and respect for the ancestors.

Furthermore, the day is used for New Year's shopping and to visit friends and relatives, who are wished a blessed New Year. (拜年, bàinián )

On the third day (正月初三, Zhēngyuè Chūsān ) and fourth day (正月初四, Zhēngyuè Chūsì ) of the New Year, the relatives are visited. Often this is connected with joint small trips of the extended families. This day is also called "Chìkǒu" (赤口 - "bare tongue = quarrel"), because it is easier to argue with members of the extended family at family celebrations.

In families where a relative has died, no home visits are made for three years as a sign of respect for the deceased. Instead, the grave, urn or other memorial of the deceased is visited.

The fifth day (正月初五, Zhēngyuè Chūwǔ ) begins in northern China with a breakfast of jiǎozi (餃子 / 饺子 – "dumplings"). He is also called pòwǔ (破五 - "broken five"). The birthday of the Chinese god of prosperity is also celebrated on this day. In Taiwan, this is traditionally the reopening day of shops accompanied by firecrackers.

The seventh day (正月初七, Zhēngyuè Chūqī ) or "Rénrì" (人日) is "everybody's birthday", when one turns one year older. In the past, individual birthdays played little role in traditional China compared to this day, which has changed in modern times.

The day is the culmination of the Spring Festival in the Jin Dynasty , as each of the first seven days is an animal's birthday.

For Buddhists, this is a vegetarian day.

This day has special significance for the people of the Hokkien province , who worship the Jade King on the night of the ninth day and serve him tea and sugar cane to be protected from the evil effects of an extermination that took place generations ago.

On the fifteenth day (正月十五, Zhēngyuè Shíwǔ ) the Lantern Festival (元宵節 / 元宵节, Yuánxiāojié ) is celebrated. Tangyuan (湯圓 / 汤圆, tāngyuán  - " sticky rice flour dumplings with sweet filling") are eaten and candles are lit outside the home to guide the ancestral spirits home. People also take to the streets with small lanterns. The Spring Festival ends on this day.