from Wikipedia, the free encyclopedia
丙申

The fire monkey ( Bingshen , Chinese  丙申 , Pinyin bǐngshēn ) is the 33rd year of the Chinese calendar (see table 干支 60-year cycle). It is a term from the field of Chinese astrology and describes those lunar years that are linked by a connection of the third heavenly stem ( 丙 , bǐng , element fire and Yáng ) with the ninth earth branch ( 申 , shēn ), symbolized by the monkey ( 猴 , hóu ), are characterized.

According to the Chinese calendar , such a connection occurs every 60 years. Because of the deviation of the traditional Chinese lunisolar calendar from the Gregorian calendar, the year of the Fire Monkey lasts from February 8, 2016 to January 27, 2017 . 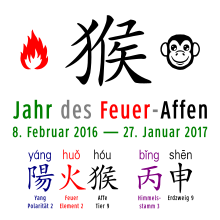 Chinese terminology for the year of the fire monkey 2016