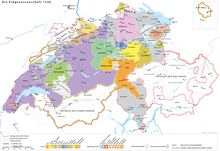 Buenos Aires shortly after its inception

Reformation in the Holy Roman Empire and France

In March, the Basel book printer Thomas Platter prints and publishes the first edition of the Institutio Christianae Religionis by Johannes Calvin . As one of the most important books of the Reformation , the Institutio becomes the theological textbook of the French-speaking Reformed Church and the basis of the theology of the Reformed Church outside France. In the - in vain - hope that it may him from the persecution of the Huguenots hold, Calvin left the factory to the French king Francis I paid.

In May, Reformation theologians conclude the Wittenberg Agreement . It is about the interpretation of the Lord's Supper , which is disputed between representatives of the Swiss and the so-called "Upper German" Reformation . In the negotiations from the 21st May bis 28. May the Wittenberg participate Martin Luther , Philipp Melanchthon , Johannes Bugenhagen , Caspar Creuziger , Matthew Alber and Johannes Schradin from Reutlingen , Jacob Ottner from Esslingen am Neckar , Johann Bernhard from Frankfurt , Martin Bucer and Wolfgang Capito from Strasbourg , Martin Frecht from Ulm , Justus Menius from Eisenach , Friedrich Myconius from Gotha , Wolfgang Musculus and Bonifacius Wolfhart from Augsburg , Gervasius Schuler from Memmingen , and Johannes Zwick from Konstanz , who arrived later . Justus Jonas the Elder signs the Agreement retrospectively. With the exception of the Konstanz preacher Zwick, who pretends not to be legitimized to do so, the Upper German cities accept the Agreement, but not the Swiss. 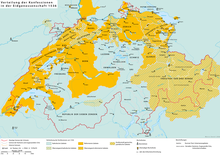 Confessional distribution in the Confederation, 1536

The theological doctrinal difference ultimately leads to a divergence between the German and Swiss Reformations and thus also justifies the special position of Calvinism , which will take on a European dimension in light of the reformed denomination in France. The “German” direction of the Reformation, on the other hand, remains relatively closed despite ongoing discussions about dogmatic-sacramental questions.

With papal permission, three inquisitors are appointed to Portugal and the king granted the right to appoint a fourth. The Portuguese Inquisition Council is known as the Consejo general . In motherland Portugal, three inquisition tribunals are finally established in Coimbra, Lisbon and Evora.

The earth represented by the Stab-Werner projection , 1536 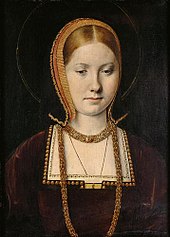