Leaflets on the occasion of the Reichstag election in 1924

As a flyer , Flyer , Austria leaflets , older even flying sheet and now mostly by the English term Flyers known is called a labeled paper sheet transported a message and disseminated. Leaflets do not appear periodically, often only once, and they are classified as printed matter .

Leaflets are on current events, for announcements or advertising published and free actively distributed by persons or other methods or they are made for driving. Examples are local or regional news, small price lists or event lists and notices. In the early stages of the press, leaflets were often added as a separate sheet to a newspaper . 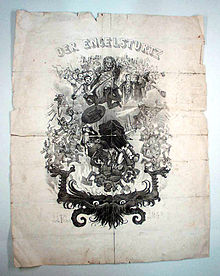 Typical features of leaflets are:

A distinction is made between leaflets and the somewhat more extensive pamphlets . Promotional leaflets are called flyers . Multi-page, folded pamphlets are leaflets , with multiple folds (like an accordion ) they are called leporello . Pamphlets that describe a certain product or service are called prospectuses , general information pamphlets are brochures .

Leaflets from the late Middle Ages to the Reformation

The leaflet was the first means of mass communication and has been traceable since 1488. Most of the authors remained anonymous. While one thinks of political leaflets today when one thinks of the term “leaflet”, when one speaks of leaflets in the late 15th century, one means commercial flyers. These commercial leaflets were the “Bild-Zeitung” of the late Middle Ages: a commodity made to earn money, offered by barkers and traveling traders at fairs and in front of church doors, but they were also sold in traditional bookshops , wholesalers and at trade fairs. However, they were not free - in contrast to the protest leaflet known today. Rather, it is estimated today that the single sheet cost at least as much as a skilled craftsman in the city earned per hour. Some estimates even assume four to five hours. This made leaflets almost unaffordable for the simple rural population.

The term leaflet was not used until the 18th century . Initially, this form of publication was called "flying writing" or "flying sheet".

Large illustrations often took up a third of the size of the sheet, produced using the woodcut technique. Anyone who owned leaflets proudly hung them up on walls, boxes and cupboards at home. The illustrations were very important for conveying the message of the leaflet at this time, as only a very small part of the population was literate. They should also encourage people to buy. Images of strange animals, unknown objects, countries or monsters were very popular. The oldest illustrated leaflet “Donnerstein von Ensishein” (1492) that is known so far comes from Sebastian Brant . It depicts the impact of a meteorite, which was then considered a harbinger of further misfortune and a warning to the rulers.

Four topics dominated the leaflets: sensations and wonders; catechistic instruction and purification, comfort of soul and edification, and finally political and military news and information. The illustrated leaflets also developed the first forms of caricature and were also often used for calls, statements or warnings. The early illustrated flyers were thus tabloid information media, produced for the purpose of making money. They rarely had anything to do with political agitation. This only changed from the Reformation period after 1500.

Pamphlets from the late Middle Ages to the Reformation period

Pamphlets are formally differentiated from leaflets in that they have more than one page - technically speaking, they are therefore the forerunners of the daily newspaper, the modern booklet of novels or the instructions for use.

Pamphlets were used to publish news and were aimed at people who were more interested in “real” information than in the sensational press . If you say that the leaflet was something like the "Bild-Zeitung" with only one article before the Reformation, then the leaflet was roughly the "Frankfurter Rundschau" of the late Middle Ages.

Leaflets from the Reformation period

From the time of the Reformation, the leaflet became more political. It served as a means of conflict in the religious war, as well as in the peasant war . The traditional, primarily sensation-seeking leaflet (“Man with four heads seen!”) Was passed on in parallel, but it steadily lost its importance. The political leaflets of the Reformation period were not free either, because paper and printing were too expensive for that.

Today the leaflet (referred to as advertising leaflet or flyer ) is not widely distributed, but is mostly designed for advertising purposes for a specific target group. Flyers are one of the most widely used offline marketing instruments today and are professionally created. A clear division, interesting texts and images are adapted to the specific target group. An expressive headline arouses the recipient's initial interest and prompts them to continue reading. Advertising leaflets are distributed to households as scatter advertising, as inserts in mail or as product information aimed directly at a specific group of people. However, they are also disseminated by political groups, authorities or associations: with election information, event announcements or often used to recruit members.

The distribution of printed matter on roads for commercial purposes is subject to a permit in Germany as a special use .

The legal notice of the state press laws applies to leaflets . This obliges the author to provide the name and address.

The political leaflet in modern times

Resistance medium in the time of National Socialism

The leaflets became particularly important as a means of political resistance in Germany in the 1940s through the Scholl siblings and members of the White Rose resistance group . From the summer of 1942 until their arrest by the German Nazi regime in the spring of 1943, they created and distributed 6 leaflets in which they called for resistance to the National Socialist terror.

Preparing to drop leaflets over the Western Front by balloon

In the war propaganda of the 20th century, leaflets in the form of leaflet bombs (so-called war leaflets ) formed an important part of psychological warfare . During the First World War, France distributed the Le Courrier de l'Air leaflet by balloon.

Important leaflet collections have the following facilities, among others: