from Wikipedia, the free encyclopedia
This is the spotted version , flagged on July 23, 2020 . There is 1 pending change that has yet to be viewed.

This article covers the newspaper in general. For the German-language newspaper in London at the time of World War II, see Die Zeitung . 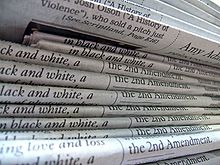 The word newspaper was originally used to describe any news item , but its meaning changed over the course of the 18th century . Today it is understood as a periodically published print product with current and universal content. This consists of several texts that are self-contained in terms of content, which are called newspaper articles and various journalistic stylistic devices are used in their drafting .

As Internet or online newspaper are online publications with newspapers but also magazines called -character.

A newspaper is defined in a very general way as a printed work with a moderate number of pages that appears publicly at periodic intervals, usually daily or weekly. For the generic term newspaper, it is irrelevant whether the reader has to pay for it or whether he receives the product free of charge. This is why the newspaper category also includes free newspapers or advertising papers distributed free of charge . Four criteria should be given when speaking of a newspaper: topicality (timely reporting), periodicity (regular publication), publicity (publicly accessible to all readers) and universality (diversity of content).

The word newspaper came up around 1300 as zīdunge , which goes back to the Middle Low German and Middle Dutch term tīdinge : message , that is news about Danmessage.

In contrast to the magazine , the newspaper is a press organ that is committed to being up-to-date and is usually divided into several content-related categories such as politics, local issues, business, sports or features , which are created by independent departments . A department always works on a certain topic, a certain rubric, for which it is responsible and independent of the other departments - whereby the boundaries are increasingly leveled in favor of the concept of an integrated editorial department, task-specific and cross-competency ( news desk ) . Often, the individual subject areas are divided among the editors within a department , depending on their qualifications and knowledge.

The editorial department is the journalistic department in a newspaper or magazine publisher . In or for an editorial office, editors, generalists, freelance journalists and volunteers write, and in some cases external experts.

→ Main article : History of the newspaper

Novellants sent messages on individual sheets that were collected for subscribers. These Fugger newspapers , archived in the Austrian National Library , were created around 1589 and were published by Katrin Keller et al. digitized and researched at the University of Vienna .

The history of the newspaper as a regular medium is closely interwoven with the early modern period . The first printed news paper worthy of the name of a newspaper in the modern sense was the relation . It was founded by Johann Carolus and appeared once a week in Strasbourg in Alsace from the second or third week of September 1605 .

The world's first daily newspaper came out in Leipzig in 1650 . The printer Timotheus Ritzsch published the Incoming Newspapers for the first time in July 1650 . These appeared six days a week. The Wiener Diarium and thus the Wiener Zeitung appeared for the first time in 1703 . This makes it the oldest daily newspaper in the world that is still published.

The newspaper reached its peak in the first half of the 20th century . Currently (as of October 2011) there are 390 newspapers in Germany (369 daily and 21 weekly newspapers) that are registered with the IVW .

Newspapers consist of the so-called editorial part , which is the responsibility of the editorial staff and presents the content with journalistic stylistic devices, and the advertising part . The individual segments of a (extensive) newspaper are called books (Swiss: frets ). They usually also structure the departments (cf. “Sports section”, “Business section” etc.).

There are various tools available for exploring reader behavior, satisfaction and wishes. Classic feedback instruments are letters to the editor and reader phones. However, they are only used by certain types of readers. The number of copies sold can also be evaluated for user research. More extensive instruments are copy tests , combined for example with questioning or technical aids such as gaze history recording and reader scan .

At the turn of the millennium, the number of Internet users worldwide exceeded the number of newspaper buyers (2005: 439 million according to data from the World Association of Newspapers )

According to the Bundesverband Deutscher Zeitungsverleger (BDZV), the German daily newspaper market was the largest market in Western Europe with a circulation of 21.67 million copies in the first quarter of 2005 . According to this, 27.376 million daily, weekly and Sunday newspapers were sold per publication day during this period ; of which around 18 million copies (65%) were sold by subscription .

The long-term study of media use by ARD / ZDF in spring 2005 showed that in the previous year, with a total use of daily media of 600 minutes per day, the daily newspapers were already considerably behind the Internet (44 minutes) with 28 minutes (2000: 30 to only 13 Minutes of internet). In 2012 the trend continued from 23 minutes (daily newspaper) to 83 minutes (Internet). According to the BDZV, at the time of the surveys the newspapers still had a clear credibility advantage, not only over web publications. The credibility of the media genres was assessed as follows after an investigation, which, however, dates back to 2006:

Newspaper death and proposals against it

The following figures are available from the USA, for example, on the international so-called newspaper death in connection with the Internet and the advertising crisis : from 2006 to 2008, the turnover of the publishing houses fell by 23%, the number of permanent journalists by 10%. For the first time, citizens did more research on the Internet.

It is discussed whether and, if so, how this should be counteracted. One demand is a “Newspaper Revitalization Act”, according to which publishers should be treated like educational institutions with the status of non-profit organizations . Models such as foundations , donation financing , a status under public law that should enable fee-financed journalism, cooperative shares similar to the taz or an extended culture flat rate are also discussed .