Advertisement is a redirect to this article. To offer sheet The inserat see Quoka , the thriller see Polizeiruf 110: the ad . 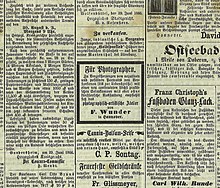 Advertisements in the Hannoversche Kurier from 1866

An advertisement is a public announcement or announcement that is printed on behalf and in the interest of the person making the announcement and usually for a fee as an advertising message in a print .

Placing or publishing an advertisement is also referred to as an insertion . 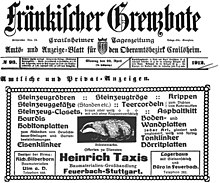 An advertisement is used for information and communication , advertising or communication . The advertising industry differentiates between image, product and coupon ads. The latter contains a detachable reply section that enables the reader to place an order or contact us directly. This feedback can be used to measure the commercial success of the promotion. Image and product ads are assigned to classic advertising, coupon ads to direct marketing .

In addition to product or image advertising, job offers , contact or death notices are also printed. Occasionally, advertisements are used to search for people who are available for surveys for a defined purpose.

The advertising department can refuse publication if the text

Further reasons for rejection can be technical requirements that have not been met or financial problems (poor creditworthiness ) of the advertiser. The advertising manager accepts on behalf of the publisher , the civil and criminal responsibility.

The following important information is missing from this article or section:
The modern internet system is missing.
Help Wikipedia by researching and pasting it .

Advertisement departments acquire advertisers, sell advertisements and process the orders (advertisement disposition) until they are printed. Sales representatives who are assigned a specific area or industry in order to acquire orders there mostly work on a commission basis . There are publishers who conduct their sales force through independent advertising agents who only receive commission, i. H. do not receive a fixed salary. If, on the other hand, the sales force is affiliated with the publisher, then the employees are called the publisher's representatives. They receive a basic salary and an additional commission from the publisher. The publisher also pays for social security .

An advertisement has to be paid for by the advertiser or the media agency commissioned by him . Depending on the strategic direction of a publisher, classified ads and advertisements from advertisers (so-called commercial advertisements ) can make a significant contribution to the overall financing of a newspaper or magazine. The advertising business should make the publisher and its publications independent of outside influences. Since the publishers are dependent on the advertising business, however, they are increasingly responding to advertisers' requests and the required conditions ( discounts , discounts in kind ) from customers and agencies.

There are a large number of discounts and rebates in advertising sales, for example when placing multiple advertisements or placing different advertisements of a company in several titles of a publisher (so-called combination discount). There are also discounts , bonuses or agency commissions.

In addition, so-called contracts or commitments are common, in which the customer undertakes in advance to purchase a certain amount of advertisements (in column millimeters or as the number of placements). The discounts achieved in this way are staggered; The standard is a frequency scale (number of advertisements placed in different issues) and quantity scale (calculated according to pages or column millimeters). Billing is usually based on the best principle, i.e. H. If the customer has accepted more advertisements than originally agreed, he may receive the discount of the next higher level.

In the case of newspapers, a distinction is made between text part and advertisement part advertisements. There can be a different column width when a newspaper z. B. has six text columns and seven advertising columns per page (in this case a corresponding factor is included in the price calculation). There is usually no such distinction in magazines. Due to the different printing processes, advertisements in newspapers are always in the type area. In magazines, the advertisements are almost always full-page (with bleed)

Because of the better overview in the advertising section, the ads are mostly grouped thematically, in real estate , job search , buying and selling of motor vehicles . The advertisements can be published either as normal lines of text (often with different font sizes to choose from), as a photo advertisement or as graphically designed layouts .

Other forms of advertising

The self-advertisement is a means of the publisher to advertise cost-effectively for itself or for derivatives of the house ( CDs , audio books , websites etc.). In cooperation advertisements, several companies in one area advertise a product or service together. Dealer advertising enables smaller branches to advertise with the support of the entire company / group. Charitable or non-profit advertisements are heavily discounted or published free of charge. If these are free of charge, they are often used as fillers . Special formats (also called AdSpecials) are unusual forms of presentation of advertisements that surprise the reader and thus attract increased attention. Whereas in the past, complex print production was the exception, more and more print shops have upgraded their technology in the past few years and can now offer a wide range of special formats that are standardized and therefore cheaper.

With the emergence of the modern newspapers, the intelligence papers, in the 18th century , not only commercial advertisements but also printed announcements of family events, especially births, marriages and deaths, began. Family members (parents, children, survivors) formulate, order and pay for private advertisements in public and commercial newspapers and periodicals that are accessible to everyone, printed and distributed through their print run. Family advertisements have been a major source of income for all newspapers ever since.

Historical forerunners of the printed family advertisements were still handwritten, but already standardized notifications that were sent. The printed funeral sermons of the 16th to 18th centuries, which go back to Martin Luther and in which the families published the sermon with obituary spoken by the clergy in the event of a death, as ostentatiously religious and pious writing, can be regarded as forerunners of the obituaries . This was enriched with partly more extensive biographies, genealogies and the like and often luxuriously printed for distribution. The obituary in the modern intelligence papers, as a modern, inexpensive short version, has apparently replaced the old, more expensive form of funeral sermons.

Family ads have changed in many ways over their centuries of history. Since the middle of the 20th century , for example, marriage notices have increasingly been published by the wedding couple themselves and not by their parents. Birth announcements are often alienated today, in that newborns seem to have made their birth known themselves through their own public newspaper advertisement or other humorous formulations are used with corresponding pictures. Advertisements for engagement have almost completely disappeared .

A new type of family announcement arose in the Federal Republic of Germany around the 1970s in the form of newspaper thank-you announcements on the occasion of communion or confirmation . This means that individual Catholic Communion children (i.e. around 9 years old) or Protestant confirmands (i.e. around 14 year old adolescents) place advertisements in their own name in local newspapers, in which they can e.g. We would also like to say thank you publicly on behalf of the parents for the generous gifts and congratulations that they received on the occasion of communion and confirmation. Corresponding newspaper advertisements developed in the GDR on the occasion of the youth consecration there .

Congratulations and greetings, which are widespread today, are another advertising division. They display congratulations etc. on all kinds of personal events such as communion, weddings, birthdays, anniversaries, convalesions, exams, etc. from family members or third parties. Notifying parties and addressees usually remain anonymous with their first names (or nicknames ). It is therefore questionable whether the public information function of the classic family advertisement is still present here, or rather internal communication within small, closed groups of families and friends via the public medium of the newspaper.

Here, too - as with the advertising papers (see below) - the print media and the Internet have meanwhile grown in competition. There are portals which - in some cases free of charge - offer their users the option of designing family advertisements individually, publishing them in general and sending them specifically by email . Advertisements that have been published can be searched, read and commented on in a database by anyone at any time and anywhere in the world. Due to the aspect of direct interaction, the term “family display” takes on an expanded meaning towards an online community .

Since their creation, family advertisements have gone beyond the respective information statement because of the open design option by specifying

an both individually and socially important medium of public representation and self-expression ( status symbol ). For sociology or social history, social psychology , the history of mentality, linguistics , media history as well as for biography and family research, family advertisements are a multi-layered, informative and meaningful type of historical source. The collection and evaluation of historical family reports is still in its infancy and opens up many fruitful research opportunities.