The Social Security is an insurance system where the insured risks (such as sickness, maternity , nursing care , work injury , occupational disease , unemployment , disability worn, old age and death) by all insured. It is not a property insurance .

Depending on the state or insurance branch, social insurance is operated by state institutions, public corporations or private corporations . They were mostly brought into being in the second half of the 19th or beginning of the 20th century (beginning of large-scale industry).

In Germany , social security is a form of state-regulated care for important risks to life that is organized by self-administered insurance carriers. The benefit requirement for one year is almost entirely covered by the premium income for the same year, i. In other words, the accumulated capital essentially only serves as a short-term fluctuation reserve ( sustainability reserve , generation contract ).

The benefits are primarily provided as benefits in kind that are the same for all insured persons (principle of solidarity ) or as contribution-based cash benefits (e.g. pensions, sickness benefits ). It is financed for the most part from contributions , in some branches also from tax revenues. The contributions are based on the gross wages and salaries up to the amount of the contribution assessment ceiling and are (with a few exceptions) "equal" , that is, half of the employer (as ancillary wage costs ) and half of the employee (exception: the statutory accident insurance , whose contributions only the Employers raise). The legal basis for social insurance is the Social Security Code (SGB) and a few other provisions of the Reich Insurance Code (RVO). 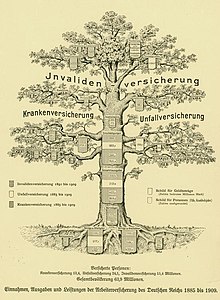 Chart of workers' insurance and its expenditures 1885–1909

Beginning in 1883, were in Germany by Chancellor Bismarck out the statutory health insurance , the accident insurance and pension insurance finally introduced. They were mostly geared towards the workforce.

"My idea was to win over the working classes, or should I say to bribe them, to see the state as a social institution that exists because of them and wants to care for their well-being"

This was intended to counter social unrest and socialism on the one hand , and on the other hand to remove the economic basis that already existed, voluntary social insurances of the trade unions and the church workers' associations.

There are five branches of social security:

When statutory social insurance is compulsory insurance to a read-out for people with high and low risks (eg. As healthy and sick people) to avoid and partly to achieve regardless of the amount of the contributions is also a solidary sharing among the insured. It also includes people who would otherwise not be able to obtain any other protection, for example from private insurance, due to their low income or high risks.

The contributions are usually calculated according to the gross wages and salaries (up to a sector-specific assessment ceiling ). The insurance is financed in different parts by employer and employee contributions, depending on the division (see also low-wage jobs ). To compensate for non-insurance benefits, there are federal subsidies that partially cover the expenses. The employer pays the insurance contributions to the health insurance company for both parties . For this he receives a company number from the local employment agency .

The payment is based on acquired entitlements (e.g. in the case of pensions or sick pay) or there are equal benefits in kind for everyone when the insured event occurs.

Social security systems of other countries

In Germany, Austria and Switzerland, in addition to insurance benefits in the narrower sense, prevention and rehabilitation also belong to the tasks of social insurance.

The social systems within the EU show clear differences. For example, social security in Sweden finances, among other things, parental allowance .

In Finland , social security is largely organized by Kansaneläkelaitos (Kela).

Coordination of social security benefits within the EU

Intergovernmental agreements on social security are intended in particular to support people with cross-border employment in two countries in safeguarding their social rights. The Regulation (EC) no. 883/2004 i. V. m. Its Implementing Regulation (EC) No. 987/2009 regulate the coordination of social security systems in Europe. This regulation (EC) 883/2004 now also includes all economically inactive persons. The regulations apply in particular to people who are or have been employed in several Member States or who live or stay temporarily in a Member State other than the one responsible for them.

Before that, EEC Regulation No. 1408/71 and its implementing regulation ( EEC Regulation No. 574/72 ) regulated the social security of employees, the self-employed and their family members who move to and from the Community. They have also applied to Switzerland since the agreement between Switzerland and the EU on the free movement of persons came into force on June 1, 2002. The provisions of these regulations have been extended by EC Regulation No. 859/2003 to third-country nationals whose situation extends beyond the border of a single Member State.

At the European level, the different social systems are not standardized, but are merely coordinated with one another. For example, social security benefits are sometimes paid by the country of origin even if the person concerned lives in another country. In contrast to this, special non-contributory cash benefits are provided exclusively to eligible residents by the country of residence.

An EU-wide social insurance register is not planned, according to the Bundestag statement from May 2007; an abuse of the E-101 certificates would be better combated by electronic processing.

The Art. 141 TEC (formerly Art. 119 EEC Treaty) refers to on equal pay for men and women and thus detects Although contributory security systems (especially enterprises' schemes because the contribution as a benefit in lieu of performance is considered), but not tax-financed state systems Basic security. In July 2008 the European Commission presented a draft directive (COM 426), which aims to prevent discrimination in the area of ​​social security , among other things . The previous Directive 79/7 / EEC on the step-by-step implementation of the principle of equal treatment of men and women in the area of ​​social security does not yet offer any protection against indirect discrimination with regard to state systems of basic social security ( social assistance and, in Germany, unemployment benefit II since January 1, 2005 ). The prohibition of discrimination contained in this directive applies according to Article 3 (1) b of Directive 79/7 / EEC only in the case of a social welfare system if there is a legal system to protect against the employee risks of illness, invalidity, old age, occupational accidents, occupational diseases or unemployment To "supplement or replace".

At the international level there are several conventions of the International Labor Organization on social security. After their ratification by the competent authorities of a member state, these establish legal obligations.

Bilateral or multilateral intergovernmental agreements on social security provide for the protection of social rights of persons who are or have been gainfully employed in two or more countries. On December 11, 1953, four interim agreements were concluded within the framework of the Council of Europe. a. coordinate the social insurance for nationals of the contracting states. However, it did not adequately capture situations in which people worked in more than two countries. The Convention of the International Labor Organization No. 157 ("Convention on the Establishment of an International System for Respecting Social Security Rights") of 1982 provides in Articles 6 and 7 that Member States shall endeavor to count social security periods cumulatively, with the restriction that that rights acquired at the same time are only counted once.

The (non-binding) Global Compact for Safe, Orderly and Regular Migration also provides for the creation of mechanisms for the transferability of social security and acquired benefit entitlements in point 22.