Every year more than twenty thousand people in German-speaking countries develop occupational diseases. You will be medically rehabilitated and financially compensated by the accident insurance institutions. 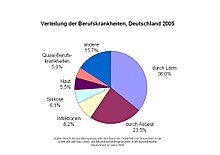 Occupational diseases have been known since ancient times. Seafarers suffered from the vitamin deficiency disease scurvy , and workers in the mining industry died from pneumonia (e.g. silicosis ).

Often, however, the connection between work and illness was not obvious. Many occupational diseases develop gradually in long, chronic processes and are based on a variety of causes, some of which are unknown. In addition to professional influences, individual lifestyle, personal constitution and disposition and the interaction of professional and non-professional factors also play a role. If there are several competing causes, the decisive factor is which cause, from a legal point of view, contributed significantly to the disease (so-called theory of the essential condition ). The reason for this is the design of the statutory accident insurance as a so-called causal security system, in which - in contrast to the "final" security systems - only those damage to health are to be compensated that are due to a specific cause - here: an occupational disease. The distinction between occupational accidents and occupational diseases arose in the early social justice rulings from decisions of the Reich Insurance Office, which decided in 1887 that only temporally delimited incidents were to be regarded as eligible for compensation in the sense of the Accident Insurance Act of 1884, but not the gradually emerging occupational diseases.

In the case of some diseases, there are latencies of several decades between the damaging effect and the outbreak. The mean latency period for asbestos-related diseases is 38 years. People who worked with asbestos in the 1950s became ill in the 1990s. After such a long time, it is usually difficult to prove the connection between the occupational activity and the illness. It is true that the accident insurance institution as well as the social court determine the facts ex officio ( Section 20 SGB ​​X , Section 103 SGG ). However, the person concerned must cooperate so that one can say that the burden of proof lies at least in fact with the sick person. Depending on the legal system, however, he or she is given easier evidence or certain causal relationships are presumed by law ( Section 9 (3) SGB ​​VII ). Especially with diseases that have several (possible) causes, those affected can easily find themselves in need of evidence.

As part of their duty of care , employers are required to carry out a risk assessment. For example, through the key feature method in the area of ​​physical workload when manually lifting, holding, carrying, pulling and pushing loads.

Occupational disease as an insured event

Only those diseases are included in the ordinance which, according to the knowledge of medical science, are caused by special effects to which certain groups of people are exposed to a significantly higher degree than the rest of the population through their insured activities. This restriction serves to distinguish occupational diseases from so-called widespread diseases , which can affect anyone regardless of the respective activity. The Federal Ministry of Labor and Social Affairs issues leaflets for medical examinations in the case of occupational diseases, in which sources of danger , clinical pictures and diagnoses are described.

Form for reporting an occupational disease.

In the Federal Republic of Germany, the current list of occupational diseases, as a result of the amendment to the Occupational Diseases Ordinance, has included over 80 diseases since 2019. According to the construction industry in this industry, the increasing white skin cancer is one of the newly recognized ailments . In 2018 it was "the most common occupational disease with 2,944 new suspected cases". In the first half of 2019, according to a preliminary evaluation, the status was already 1,400 reports. BG BAU General Manager Klaus-Richard Bergmann and the German Cancer Aid Foundation demanded , against the background of climate change, that “increased prevention work against skin cancer” be carried out. The course should be set to protect against UV radiation in the construction industry in order to contain skin cancer diseases.

Recognition as an occupational disease

In the wake of the COVID-19 pandemic , around 5,700 cases of COVID-19 infections in the healthcare sector were recognized as an occupational disease. (As of July 2020)

In the case of other diseases, the sick person must refrain from all activities that were or may be the cause of the development, aggravation or resurgence of the disease. If he continues to work despite the illness, there is no legal occupational illness. Serious skin diseases and certain obstructive respiratory diseases belong to these occupational diseases with an obligation to omit. Vibration-related circulatory disorders and diseases of the tendon sheaths and intervertebral discs. This does not include B. the noise-induced hearing loss, since it is difficult to prove that the occupation is the main cause.

According to German law, an illness that is not mentioned in the Occupational Diseases Ordinance or for which the requirements stated in the Ordinance are not met can be recognized by the accident insurance institution "as an occupational disease". This presupposes that, according to new findings in medical science, the disease is caused by special effects to which certain groups of people are exposed to a significantly higher degree than the rest of the population through their insured activities ( Section 9 (2) SGB VII). Illnesses that are recognized as an occupational disease, although they are not formally legally recognized, are referred to as how or quasi-occupational diseases.

This regulation on how occupational diseases is intended to counteract the disadvantages of the otherwise applicable list principle. They are intended to compensate for illnesses such as an occupational disease that are not included in the list of occupational diseases only because the findings of medical science about the particular risk to certain groups of people in their work were not yet available in the last version of the list or despite being checked not enough yet. The decision as to whether an illness is to be equated with an occupational illness in individual cases is made by the responsible accident insurance institution. It is fully verifiable in court.

Development of occupational diseases in Germany 1960–2005.

In § 1 SGB VII the legislature calls for the tasks of accident insurance in the first place the prevention , prevention of industrial accidents and occupational diseases and work-related health hazards ie by all appropriate means. Work design measures must already be taken with regard to work-related health hazards - not just when an occupational disease threatens.

The Occupational Safety and Health Act obliges every employer to take measures to prevent accidents at work and work-related health hazards, including the humane design of work.

Development of occupational diseases in Austria 1975–2005.

The legal situation in the Republic of Austria shows parallels to German law: The diseases described in an annex to the General Social Insurance Act (ASVG) of 9 September 1955 are considered occupational diseases. They must be caused by exercising the "employment establishing the insurance" in a company specified in the annex ( Section 177 (1) sentence 1 ASVG). Skin diseases are only considered occupational diseases if and as long as they force you to give up harmful activities (Section 177 (1) sentence 2 ASVG). Occupational diseases are, for example, illnesses caused by tick bites in forest workers.

As in Germany, illnesses that are not included in the list can also be recognized as quasi-occupational diseases in Austria. If it is established on the basis of reliable scientific knowledge that an illness has arisen exclusively or predominantly through the use of harmful substances or radiation during an occupation carried out by the sick person, then it is considered an occupational disease. The decision is made by the relevant accident insurance institution with the consent of the Federal Minister for Labor, Health and Social Affairs (Section 177 (2) ASVG).

The Workers' Compensation Board recognized in the year of 2014 1.229 diseases as occupational diseases, including 597 cases of noise induced hearing loss and 191 skin diseases.

The Austrian Employee Protection Act (AschG) provides for a risk evaluation with the aim of preventing occupational diseases. Occupational diseases arise due to unhealthy working conditions and working materials in the company. If these and the employees at risk are recorded and periodically checked, those responsible can assess the risk of dangerous diseases and prevent them. This includes the investigation of the working conditions, the investigation of the endangered workers as well as organizational, technical and personal protective measures in the company.

In Switzerland , illnesses that are exclusively or predominantly caused by harmful substances or specific work are considered to be occupational diseases. The harmful substances and work as well as work-related illnesses are recorded in a list. The list is drawn up by the Swiss government, the Federal Council , and kept as an appendix to the Ordinance on Accident Insurance.

Relatively strict requirements are placed on the acceptance of an occupational disease: the sick person must have been exposed to a typical occupational risk for a certain period of time. A one-off damage to health that occurs at the same time as the occupation is not sufficient. In the case of list diseases, the occupational share of the damage must be at least fifty percent. In the case of non-list diseases, at least seventy-five percent of the illness must have been caused by professional activity.

Recognized occupational diseases are legally equivalent to occupational accidents . Details are regulated in the Federal Law on Accident Insurance (UVG) of March 20, 1981.

The revised ASA guideline has been in effect since February 1, 2007 . The aim is to use a systematic approach to prevent accidents and occupational diseases and thus to avoid human suffering, lost hours and costs.

A European list of occupational diseases has existed since 1990 and was last updated in 2003. The list was drawn up by the European Commission and is intended as a recommendation for the member states of the European Community. It is divided into two parts. Part I lists the diseases which, according to the recommendations of the EC Commission, should be recognized as occupational diseases in the nation states. These include silicosis, asbestosis, skin diseases caused by certain substances, noise-induced hearing loss and carpal tunnel syndrome. Part II lists diseases that are suspected to have an occupational cause and which should therefore possibly be included in Part I at a later date. Among other things, diseases caused by ozone, diseases caused by hormones, tropical diseases and damage to the intervertebral discs of the lumbar spine from repeated vertical whole-body vibration loads are mentioned.

A study by the Statistical Office of the European Communities (Eurostat) showed that tendonitis of the hand and wrist as well as epicondylitis ("tennis elbow ") are numerically among the most common occupational diseases within the EC member states . Skin diseases and noise-related hearing loss are also of great importance. In addition to these common but less severe occupational diseases, Eurostat recorded more than 2,500 deaths from chronic obstructive pulmonary diseases and emphysema in miners and more than 2,400 deaths related to asbestos.

The prevention of occupational diseases is the purpose of the European Occupational Safety and Health Directive, which has been in force since 1989 and was last amended in 2003, and which regulates measures to improve the safety and health of workers at work. It forms the basis for the national occupational health and safety legislation of the EU member states .

Whether and when an illness is included in the list of occupational diseases depends only in part on medical knowledge. As a rule, socio-political and economic considerations also play a role in the decision. The inclusion of a disease in the list of occupational diseases leads to a shift in costs within the respective social security system, which is not always politically desirable. For example, the recognition of passive smoking in the workplace as an occupational disease required by the German Cancer Aid would result in additional financial burdens for the employers' liability insurance association while at the same time relieving the health insurance companies.