This article deals with ailments - for the volume see Illness (volume) .

Illness , sometimes synonymous with infirmity , is a state of reduced performance that is based on functional disorders of one or more organs , the psyche or the entire organism . In turn, these disorders are likely always caused by structural changes in cells and tissues .

The study of diseases is pathology , while nosology deals with the systematic classification of diseases.

The word “illness” is derived from the Middle High German krancheit or sickness . Originally it meant primarily "weakness" or "weakness", derived from Middle High German kranc with meanings such as "weak, powerless, weak, weakened". This is probably based on West Germanic Kranka ("lapsed", comparable to Old High German chrancholōn "weak, stumble ", and Anglo-Saxon cringan "wriggle, fall down in battle, be obsolete") and Indo-European grengh- ("curl").

The outdated or (Swiss) regional term Gebresten goes back to Middle High German gebrëst (e) or brëst with the meanings "illness" or "affliction, damage".

Illness (Latin among other things insanitas , since the Middle Ages also referred to as unhealth ) is often defined in contrast to health (Latin sanitas ). The World Health Organization (WHO) defined health as the ideal state of optimal well-being as early as 1946. In addition, illness is not the only possible cause of poor health. The transitions between “health” and “illness” are fluid. Much may ultimately be a question of perspective, especially since the expression illness is not a biological constant but a cultural value-related construct. For example, the term disorder has become commonplace for limitations in physical or mental well-being without an objective medical disease value. On the other hand, conditions that can be defined as pathological can also exist without ( subjective ) psychological stress.

The normal function of an organism results from the regularity of life processes; to varying degrees it includes the ability to adapt to changed internal and external conditions. Their judgment by people also shows dependence on their norms .

As a functional disorder, illness can affect different areas of living being and develop in their interactions. Physiological functions are essential characteristics of life . Organisms exist in complex environments and maintain, renew and change through constant material and energetic exchange. Many types of organisms live in social contexts. The functions of life also include behavior, and more highly developed organisms have emotional functions. The personality and sociality of people also function depending on their cultural world.

The assignment of diseases of a specific living being to abstract "disease categories" is considered important in connection with the development of approaches to treatment and their administrative and economic framework. A system developed for this purpose is the International Classification of Diseases and Related Health Problems (ICD-10).

For centuries, medicine has endeavored to clearly define and delimit the general term disease. In doing so, she has to deal with various clinical pictures and specific diseases.

Ultimately, different, non-uniform criteria lead to whether a state of health is regarded as a “disease”. In medicine there is always a tension between the scientific definition (existence of a disease process ) and the impairment of quality of life . In the case of the flu, for example, the patient's symptoms and level of suffering are clear, but little attention is paid to the disease process itself, the viral infection. It is different with hemochromatosis , which is treated with a less stressful bloodletting therapy - the quality of life remains high, despite the disease process to be taken seriously. In the case of other diseases, the disease may even be completely absent at times, and the focus is on a dysregulation of the organism (e.g. many cancers in the early stages). Medical progress and social change have also led to changes. While erectile dysfunction used to be accepted as a negative but non-pathological physical condition, today it is accepted as a disease, especially thanks to better treatment options.

Another problem area opens up with mental illnesses: between a clear subjective suffering without endangering others (such as depression or anxiety disorders ), a deviation from a norm (such as paraphilias , formerly also homosexuality ) and a danger to others without an immediate own suffering (some cases of a narcissistic personality disorder or disruption of impulse control ) there are innumerable gradations.

An all-encompassing, principally objective definition of “disease” would result from the disease-weight value of the DALY method. A condition with a low disease weight would then not be considered pathological. However, this method comes from health economics and again has various weaknesses.

Appropriate examinations (diagnostics) are required to detect diseases in individual patients. In this way, findings are collected which can be used to establish a diagnosis . If a person has the feeling of being “sick” or if someone has already been diagnosed with an illness, one speaks of a patient in medicine .

Individual complaints of a patient can be symptoms of definable diseases. Several symptoms that typically occur at the same time are called a syndrome (symptom complex) . Symptoms or symptom complexes that can be traced back to a common cause ( etiology ) allow the determination of a specific disease ( morbus ) in the sense of modern medicine (see pathogenesis ). This seems unambiguous if necessary or sufficient causes of the disease can be determined. For defined infectious diseases z. B. specific pathogens necessary; some congenital diseases occur inevitably with certain molecular genetic changes.

Often, however, diseases cannot be clearly traced back to verifiable causes. Sometimes they are then defined by regular structural or functional phenomena. The totality of all phenomena typical for a disease is the clinical picture (synonym: entity ), which can be observed in more or less different forms. The study of diseases is pathology .

The fact that the transition between "health" and "illness" is fluid also raises legal problems. The content of the term “illness” itself is hotly debated, especially in the area of social security law .

Illness in the sense of social security law is a disorder of physical or mental well-being, thus a deviation from the norm "health". (cf. Section 120, Paragraph 1, Item 1 of the ASVG , according to which illness is "an irregular state of mind or body that makes treatment necessary for the sick". )

The Federal Court of Justice (BGH) defined on March 21, 1958: "Illness is any disorder of the normal condition or normal activity of the body that can be cured, that is, eliminated or alleviated." According to a more recent formulation of the Federal Social Court (BSG) is The health and accident insurance system understands illness to be “an irregular physical or mental state that requires medical treatment and / or results in incapacity for work ”. As a result, the medical concept of illness is not congruent with the social law. Decisive criteria for the assessment as an illness in social law are:

The last point can be problematic for incurable diseases, as there is no improvement in such cases.

The deficiency (§ 154 ASVG) must be distinguished from this in social security law . These are irreparable ailments, the development of which is complete and the possibility of medical influence in the sense of a cure, improvement or prevention of aggravation is not possible. From a legal point of view, complaints caused by accidents and their consequences are not included in the term “illness” in Switzerland . 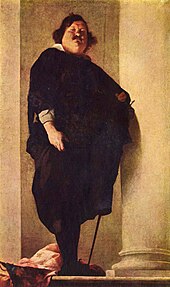 Hippocratic medicine, which originated in ancient Greece, defined disease as a disorder in the body's fluid balance. With the beginning of modern times , illness was increasingly understood as a disorder of the organism. The classification, the measure of the “normality” of transgressing changes in a person, depends strongly on the culture and the epoch. Obesity ( obesity ) was a status symbol in the Renaissance , today it is generally regarded as pathological.

At the beginning of the 19th century, the fact that certain chemical elements are the basic components of living organisms was also part of a medical concept by the French doctor Jean Baptiste Thimotée Baumes (1756–1828) , who followed the developments in chemistry of his time . According to his views published in 1806, these elements react in the body according to their chemical affinity. In addition to disturbances in the heat balance and water balance, diseases are also those of the nitrogen balance or phosphorus balance.

Serious illness in particular has to be dealt with not only mentally, but also emotionally. There are very typical reactions to dealing with a disease:

The International Classification of Diseases ( ICD-10 ) or, for the oncological field, the ICD-O allows a more precise classification .

A classification based on known or suspected causes is according to

Characteristics that statistically alone increase the rate of occurrence of certain clinical pictures without being solely responsible for them by their nature are referred to as so-called risk factors . A classic example of this is the positive statistical correlation between the increase in blood pressure and the occurrence of cardiovascular diseases .

Psychosomatic medicine attempts a mental and physical approach and healing, taking into account the emotional and social causes as well as the personality and life fate of the patient . In addition to evidence-based medicine, there are also other ways of looking at the causes of illness, including theories about metaphysical and esoteric relationships. The sociology of medicine deals with the social conditions of illness and the course of illness as well as the state control of the health system .

In modern medicine, changes in the healthy state of parts of the body that are significantly different from the healthy state are regarded as causes for diseases - and thus also their function, so-called organ pathological findings .

The causes of these changes can be divided into internal and external factors. Internal factors include general aging, hereditary diseases and inherited susceptibilities / predispositions, embryonic malformations and mental illnesses. These can hardly be influenced. In contrast, external factors such as social conditions, stress, nutrition, environmental conditions and pathogens can be easily influenced.

Illness - treated or untreated - leads to healing , remission , a relapse (or several relapses), suffering or death .

Frequently used terms that describe the course over time are:

A disease model is an epistemological approach with the aim of explaining a disease in a simplified model .

A discussion about disease models arose from the question of what the objective difference between normal and abnormal , as pathological, is. This distinction usually does not concern the judgment of the patient himself, but that of those around him. It is aimed at the supposedly sick person and reflects the views of the next of kin and the social environment about illness. It therefore also includes a sociological and epidemiological aspect, e.g. B. is of interest in medical sociology and social psychiatry .

Another approach concerns the controversy between consistent and inconsistent treatment approaches . The consistent approach states that a uniform health explanation principle is sufficient for both healthy and sick people. The inconsistent principle states that special legal processes take place for the sick, which require specialized treatment depending on the type of case identified. The demand for a uniform treatment principle goes back to Ludolf von Krehl's demand that the doctor should not treat various diseases, but rather keep an eye on the sick person as a person. This principle contributes greatly to the humanization of the treatment of the sick and removes the social stigma of the abnormal and incomprehensible from the sick.

Wikinews: Illness  - In The News