The title of this article is ambiguous. For the sub-discipline of practical theology of the same name, see cybernetics (theology) . 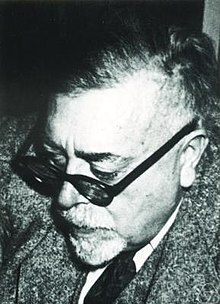 Norbert Wiener, the founder of cybernetics

Cybernetics , according to its founder Norbert Wiener, is the science of the control and regulation of machines and their analogy to the behavior of living organisms (due to the feedback through sensory organs ) and social organizations (due to the feedback through communication and observation ). It was also described with the formula “the art of steering”. The term as such was adopted in the German language in the middle of the 20th century, following the example of the English cybernetics "control technology" . The English term turn a portmanteau formed from the substantivized Greek adjective κυβερνητικός kybernetikos "steuermännisch" which is composed of the corresponding nouns κυβερνήτης kybernetes " helmsman " and κυβέρνησις kybernesis derived "line rule".

A typical example of the principle of a cybernetic system of control engineering is a thermostat . It compares the actual value of a thermometer with a setpoint that has been set as the desired temperature. A deviation between these two values ​​causes the controller in the thermostat to regulate the heat supply (usually the flow rate) so that the actual value matches the setpoint. The centrifugal governor in the steam engine and in the injection pump of the diesel engine regulates the supply of steam or fuel and is indispensable for the stable speed control of an inherently unstable system and prevents it from going through uncontrolled overspeed .

Written evidence of system-oriented thinking has been found since ancient times . The Greek epic poet Homer wrote κυβερνήτης kybernetes and meant the helmsman of a ship. Plato used the term figuratively when he spoke of a "man at the helm of a government ". The apostle Paul, on the other hand, uses the Greek term κυβέρνησις kybernesis in 1 Corinthians ( 1 Cor 12:28  EU ) to refer to the “ability to lead”.

In 1834, the physicist André-Marie Ampère developed the idea of ​​a science that he called cybernétique .

Specialty since the 1940s 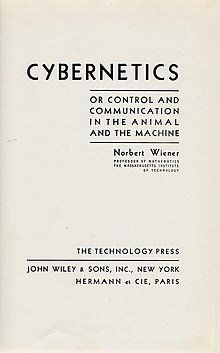 Title page of Wiener's work Cybernetics or Control and Communication in the Animal and the Machine , published in 1948

The roots of science cybernetics emerged in the 1940s when similarities between the brain and computers were investigated and interfaces between various individual disciplines that looked at human behavior, communication , control engineering , decision and game theory, and statistical mechanics were recognized . Towards the end of the winter of 1943/44, Norbert Wiener and John von Neumann organized a joint meeting in Princeton with engineers, neuroscientists and mathematicians on this topic. Another catalyst for this development were the Macy Conferences from 1946 to 1953 with the topic Circular causal, and feedback mechanisms in biological and social systems . In the summer of 1947, Norbert Wiener derived the term “cybernetics” from the Greek kybernétes for “helmsman” and thus honored James Clerk Maxwell's significant contribution to the feedback mechanism with a centrifugal governor. Its English name governor is derived from the Latin gubernator "helmsman", a Latin loan word from the ancient Greek kybernétes .

The term was first used in print by Norbert Wiener in 1948 in Cybernetics or Control and Communication in the Animal and the Machine . In the same year he published a fundamental review article on cybernetics in Scientific American .

From 1948 John von Neumann introduced further additions to cybernetics in his lectures: Von Neumann cellular automata and their logical continuation - that of Neumann Universal Constructor . The result of these thought experiments in 1953 was the theory of self-reproducing automata or self-replication . These concepts transfer properties of genetic reproduction to social memes and living cells and, since the 1970s, to computer viruses . In 1961, Norbert Wiener added two further chapters to his basic cybernetics book: About learning and self-reproducing machines as well as brain waves and self-organizing systems.

In 1953, the philosopher and logician Georg Klaus established the subject of cybernetics at the chair for logic and epistemology at the Humboldt University in Berlin . He later got involved in founding his own cybernetics commission at the GDR Academy of Sciences .

The conference proceedings Cybernetics of the Macy Conferences of the Josiah Macy Jr. Foundation (Macy Foundation) published by Heinz von Foerster in the USA from the 1950s onwards were decisive for the development of the subject . The further developments after the Macy conferences emerge from the history of the fields of application (see table on the right).

The founder of cybernetics in Germany is Hermann Schmidt , who developed this set of ideas at the same time and independently of Norbert Wiener and was appointed to the first chair for control engineering in Germany at the TH Berlin-Charlottenburg in 1944 . In Germany, too, in 1957, against the same historical background, the study The Consciousness of Machines - A Metaphysics of Cybernetics by the philosopher Gotthard Günther was published. In 1961, the mathematician and philosopher Georg Klaus published the book Cybernetics in a Philosophical View , which by 1964 had four editions. Several more books on cybernetics in their social and spiritual effects followed by this author. Among the popular science books are the publications of Karl Steinbuch , who in 1957 also coined the term computer science . In contrast to cybernetics, this term describes a more formalistic and technical orientation.

Today, classic cybernetics is treated in a more differentiated manner:

A philosophical interest in cybernetics goes back to the fact that it opens up the possibility of recursively understanding the term “ purpose ” : The purpose of a complex system, such as a living being or a work and action system , is itself viewed in this way. A purpose would not need a separate instance from the system to set it.

In the context of control engineering, a special powerful mathematical system theory is available today with which the behavior of systems and control loops can be described and calculated. In network theory, on the other hand, general principles of networked effect structures are sought. The decision and game theory , which deal with decision-making in some complex situations multidimensional target areas, gaining increasing importance, especially in medicine , military and economic .

Other current examples of the application of cybernetics in the social sciences are the concepts of volition in psychology and management .

Cyber ​​as a derivative term

The abbreviated term cyber , which has been used for mainframes by Control Data Corporation since the 1970s , emerged from the term cybernetics . It later became a generic term for virtual reality applications (such as cyberspace and cyber war ) and, more generally, for computer applications such as cyber crime and cybersecurity , and finally for cyborgs as a hybrid of human and machine.