The title of this article is ambiguous. Further meanings are listed under Homer (disambiguation) .

Head of Homer ("Epimenides-Typus"). Replica of a Roman copy of the Greek original from the 5th century BC Chr. Munich Glyptothek

Homer ( ancient Greek Ὅμηρος , emphasis in German: Homḗr) is considered to be the author of the Iliad and the Odyssey and thus the earliest poet of the West . Neither his place of birth nor the date of his birth or death are known beyond doubt. It is not even certain that Homer existed at all (see also Homeric question ). The question of which epoch he should have lived in is controversial. Herodotus estimated that Homer must have lived 400 years before him; this would correspond roughly to the time around 850 BC. Other historical sources place Homer's work in the time of the Trojan War , which traditionally took place around 1200 BC. Is dated. Research today largely agrees that, if Homer existed, it was around the second half of the 8th century and / or the first half of the 7th century BC. Lived.

In antiquity, other works such as the Homeric Hymns were ascribed to him, while on the other hand it is repeatedly doubted whether the Iliad and the Odyssey were even written by a single historical person named Homer.

The immeasurable effect of Homer, who was already considered the poet par excellence in antiquity, is undisputed .

The name “Homer” ( ancient Greek Ὅμηρος Hómēros ; modern Greek Όμηρος Ómiros ) originally means “ husband ” or “ hostage ”. However, the name of the poet was erroneously derived from ὁ μὴ ὁρῶν , ho mē horōn , "the one who does not see", due to its alleged blindness in antiquity . 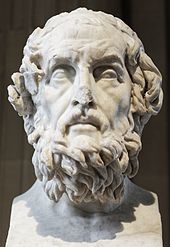 Blind Homer with the lyre on his back is led. Painting by William Bouguereau , 1874

Homer's person and origin were discussed in ancient times : Smyrna , Athens , Ithaca , Pylos , Colophon , Argos and Chios claimed to be his place of birth. One of the legends says that he was born out of wedlock on the River Meles and that his original name was Melesigenes ("The one descended from Meles "). He probably died on the island of Ios , where, according to another tradition, his mother Clymene is said to have come from.

While Homer's father is unclear, several sources agree that his mother's name was Kreitheïs . In ancient times he was often portrayed as a blind old man. Despite these lively hypotheses being formed about his origins, his appearance and the dates of his life, it is still not entirely clear whether a historical person “Homer” even existed.

The presentation of Homer as a blind and poor traveling singer is among other things the poet of the report drawn up under Homer's name Apollon - Hymn back, but who most likely did not originate from him. The exact knowledge of the upper aristocratic classes required for his work speaks against this representation , which a poor wandering singer could not have had. But since the epics - originally as an oral presentation - were heard primarily in front of aristocratic audiences, with the singers (or aoids ) sometimes staying for a long time in the nobles' oikos and contributing to their entertainment, it is conceivable that Homer too was familiar with the way of life of his hosts and belonged to this population group or this class. Some researchers suspect here autobiographical elements that Homer allowed to flow into the epics.

Beginning of the Iliad

Beginning of the Odyssey

Homer became famous as the poet of two of the earliest epics in world literature , the Iliad and the Odyssey . Iliad and Odyssey are the first great written testimonies in Greek history: according to the classical view, they were the beginning of European cultural and intellectual history. However, his authorship is controversial.

The linguistic analysis of the epics, both of which are written in the Ionian dialect of ancient Greek, seems to confirm their origin in Greek Asia Minor . The basic language is the Ionian of the early Archaic period, interspersed with elements of the Aeolian dialect and with traditions that apparently come from an older tradition. Due to the originally oral presentation from memory (see Oral Poetry ), many formulations such as epithets and entire verses, so-called formula verses , appear repeatedly.

Various text editors existed until the Hellenistic period, with the first attempts at canonization going back to the time of the Athenian tyrant Peisistratos . The current version was edited by Aristarchus of Samothrace († 144 BC), including the classification of the "chants" still used today.

While most scientists today assume an origin in the 8th century BC. Others, such as Martin Litchfield West (since 1966) and Walter Burkert , assume a later date in the 7th century BC. For it. Various approaches are used to classify the Homeric epics in time.

The complexity of the Homeric epics probably presupposes that they were written down. Since the introduction of the alphabet in Greece mostly around 800 BC The Homeric epics will not have been written before that. The earliest depictions of Iliad scenes can only be found from around 625 BC. On geometric vases. In addition, in the Iliad, the "will hunderttorige Thebes ' mentioned in Egypt, which only applies to the flowering of the city under Nubian reign during the 25th dynasty can relate (715-663 v. Chr.) Because the city from the Assyrians destroyed when they drove the Nubians out of Egypt. On the one hand, Homer was considered a contemporary of Hesiod in antiquity , who today entered the 7th century BC. On the other hand, the "Nestor Cup" from Ischia (approx. 740/20 BC) seems to allude to the Iliad and the historical context points to the 8th century BC. BC, because from the 7th century BC The undisputed aristocratic culture represented no longer existed.

Even if the dating of Hesiod is not certain and the ancient tradition can also be anachronistic, the evidence suggests that the Homeric epics in the second half of the 8th century or in the first half of the 7th century BC. Were created.

The literary question about Homer's authorship is called the Homeric question . The main question is whether Homer was actually the author of only the Iliad or of both epics at all, or whether various poets were grouped under the name "Homer" who compiled older, orally transmitted legends.

Another aspect of the “Homeric Question” is the dating of the two epics: Could the much more recent Odyssey have been written during the Iliad's author's lifetime? In part, however, it is assumed here that the Iliad is a youth work and the Odyssey is an old work of Homer.

Stylistic analyzes of literary studies tend today, due to the high compositional art and the consistent linguistic quality of both epics, to infer a common author ("Homer") as likely, as the ancient authors did.

The largely legendary ancient Viten Homer also report on other works ascribed to him. These were probably all pseudepigraphs , of which, apart from fragments, only the presumably non-Homeric travesty of the war between the frogs and mice has been completely preserved.

The authorship of the 33 poems, also attributed to Homer, the so-called Homeric Hymns - songs of praise to Greek gods, is disputed . They are stylistically close to the two epics. They used to perform rhapsodes as an introduction to their recitations. The hymn to Apollon and the hymn to Aphrodite are famous .

Already in ancient Greece, his epics served the politically highly fragmented Greek tribes and Poleis to gain a common Greek self-image ( see national poets ). Over many centuries, coins were minted with his image.

The high esteem for Homer was taken over by the Romans. The Odusia , the translation of the Odyssey into Old Latin by Livius Andronicus , one of the very first evidence of a Latin literary language, was already widespread as school reading in the aristocracy in Republican times. Virgil's epic Aeneid is also to be seen as an attempt to give the Romans a legend of origin , as the Greeks had in Homer's epics. 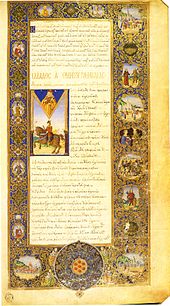 The knowledge of Greek among Western scholars, which - except in early Christian Ireland - was very diminished, also led to a decrease in knowledge of Hom; Virgil and Lucan were much more familiar as epics . The Arabic reception of Greek sources, which was otherwise very important as an intermediate link, also considered medical, scientific, mathematical and philosophical sources rather than epic sources.

It was not until 1360, inspired by Petrarch , that the Iliad and the Odyssey were translated into Latin by Leontius Pilatus .

Dante Alighieri already names Homer the first among the divine poets and the model for Virgil, whom he venerated. His own main work, the Divina Commedia , in turn had an impact on entire ages of writers, in particular on the representatives of modernism in the 20th century.

It was not until the flight of Greek scholars from Constantinople , which was stormed by the Ottomans in 1453 , that knowledge of Greek sources, and thus Homer, was brought back to the West and had a strong influence on the Renaissance .

Based on the Homer translations by Johann Heinrich Voss , Homer played the greatest role in Germany for the “people” and “nature” concepts of German literary classic and romanticism, because the Iliad and Odyssey were seen as proof that the people had their own I have an authentic voice (cf. folk song ) that nature itself speaks from it. The raising of the “Homeric Question” also belonged in this context, because if a decision was made against Homer's authorship, the epics were created anonymously, such as the Nibelungenlied , and thus “the people” could be claimed as an author. Friedrich Schiller had already turned against this : "And Homer's sun, see, it smiles at us too." ( Elegy )

This love of Greece, kindled by Homer (cf. Johann Wolfgang Goethe : "[...] searching the land of the Greeks with the soul", in: Iphigenie auf Tauris ) in the anti-princely and anti-clerical intelligentsia since the Hainbund is to be thanked that Wilhelm von Humboldt, the Greek language (alongside Latin) became a core element of the education of the humanistic grammar school. An epic about Homer that also worked through his visit to the Troas in 1819 was presented by Leopold Schefer in hexameters in 1858 , Homer's apotheosis .

Homeric materials and themes are omnipresent in classical ancient literature as well as in European literature and the visual arts . In the upscale colloquial language there are still many idioms from his work and " winged words " (this term also comes from him).

Contemporary adaptations were created by Wolfgang Hildesheimer ( The Sacrifice Helena ) and Botho Strauss ( Ithaka ) , among others .