This article is about the Greek historian. For other namesake see Diodoros . 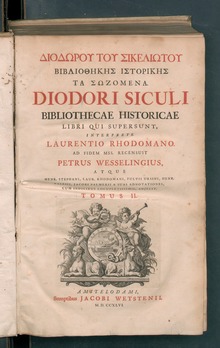 Diodorus ( Greek Διόδωρος ὁ Σικελιώτης Diódōros ho Sikeliṓtēs , Latinized Diodorus Siculus 'Diodorus of Sicily') was an ancient Greek historian of the late Hellenism . He lived in the first half of the 1st century BC. Chr.

Little is known about Diodor's life. He came from the Agyrion polis in Sicily and stayed for a long time in Rome and Egypt (during the 180th Olympiad, i.e. in the period from 60/59 to 57/56 BC).

Diodorus authored in Greek history book named Βιβλιοθήκη ἱστορική Bibliotheke Historian (complete: Διοδώρου τοῦ Σικελιώτου Βιβλιοθήκη ἱστορική , Latin Diodori Siculi Bibliotheca Historica ) and is a universal history in 40 books, of which us the books 1-5 and 11-16 and 18- 20 are preserved. The 17th book has a few small gaps. Books 6-10 and 21-40 have only survived in fragments, primarily through quotations from Byzantine authors. The representation ranges from the legendary prehistory (whereby he also processed mythological stories) to the time of Caesar (probably up to the year 60/59 BC, when Caesar held the consulate ). As far as we know, it is the most comprehensive work of history that was written by a Greek in antiquity and has at least partially been handed down to us, and at the same time forms the “conclusion of Hellenistic historiography” ( Klaus Meister ).

According to Diodorus, he spent 30 years traveling and researching. In his Universal History, however, he included older representations and rewrote them and shortened them (for example, many speeches that are otherwise typical of ancient historiography are missing) so that they were more readable and easier to understand for the audience. The quality of Diodor's work fluctuates greatly, but its historical value cannot always be estimated with certainty, as this depends largely on the sources used. But some were undoubtedly of high quality, especially since Diodorus apparently only used relevant works. According to the prevailing view, for example, he used the work of Hieronymus von Kardia , which is otherwise lost except for a few fragments , an apparently excellent story of the Diadoch period (see “Sources” below). He also used Polybios , Timaios of Tauromenion , Poseidonios and Duris of Samos intensively .

Diodorus mentions his sources quite often. As usual in Hellenism, his narrative style is before Atticistic (less embellished, generally sober and not based on Attic Greek of the 5th / 4th century, but on the Hellenistic Koine ), which is why Diodor's style is clear and legible, but in the Imperial times, when general atticism prevailed, was little appreciated.

Several errors have been identified in his work, such as incorrect dating or confusion of names, which are at least partly based on the sources used. Diodorus did not always follow the timing of his templates because he used a different chronology (according to the Olympiads, Archon years and consulates, see below) which resulted in timing inaccuracies. His self-written passages have only moderate literary value, but his collection of quotations from lost works is priceless, as he is in part the only source from which fragments of these books have come to us to this day. It is of great importance as a source for the period from Philip II from Macedonia to the time of the Diadochi (until 301 BC), but also for large parts of the 5th century BC. BC, for Sicily in general, partly also for the Roman period.

Overall, the work also has undeniable advantages, despite obvious flaws (such as the very strong dependence on its templates, content errors or inaccuracies). Therefore, it is now valued considerably higher overall than in older research. For many events it is only thanks to Diodorus that reports are available at all. Overall, his easily readable universal history appears to be a notable attempt to present the historical tradition more or less uniformly up to the end of the Hellenism. For a long time, Diodorus was only seen as an uncreative compiler, and his own creative work is therefore sometimes rated higher than it used to be.

For his universal history, Diodorus used numerous, partly lost or only fragmentarily preserved sources, apparently sticking to well-known relevant authors as a rule. The identification of the individually consulted works is quite problematic, especially since the "single source theory" predominated in older research. According to this, Diodorus followed a source for a period of time that he had more or less mechanically processed in his work. However, this thesis has recently been disputed. So go Klaus Meister and other researchers believe that one can not from a main source, or perhaps several main sources run out, but rather from a main source and one or more secondary sources, which complemented the presentation. Eduard Schwartz , who has dealt extensively with the source criticism of Diodorus, said that Diodor’s universal history could not be described as a work, but only as a compilation. This aspect is also assessed differently today, as it can be shown that Diodorus processed the amount of material relatively independently and thus, according to his own statements, pursued the goal of depicting the deeds of all people in his universal story, which should also exhort the reader to virtue (Diodor I. 1ff.).

In addition to Ktesias of Knidos and Megasthenes, Diodorus brought in several other special authors for the oriental and Indian history. The chronology provided him with an unknown Greek source, which dated the events after the Olympiads and Archon years as well as after the Roman consulate years, but was probably not always very precise or detailed, so that some chronological errors can be attributed to this circumstance. For Greek history in the strict sense, Diodorus used Ephorus of Kyme as the main source , but this was supplemented by other sources. For the west, Timaeus from Tauromenion was mainly used, supplemented by Duris from Samos . It is very uncertain whether Diodorus also used Theopompus von Chios , and it is completely unclear which (good) sources the 16th book is based on. For the story of Alexander he probably relied on Kleitarchus , whom he mentions in the 17th book in question. The aforementioned Hieronymus von Kardia was then used for the subsequent period as well as Polybius and apparently Latin sources. Whether games about Sicily are based on Silenos by Kaleakte is controversial in research, as the source question is very problematic overall.

The following list contains an (incomplete) overview of some of Diodor's most important sources with details of the subject matter dealt with in each case. However, several sources are unknown or lost.

Important historians such as Herodotus , Thucydides and Xenophon are mentioned by Diodorus as sources, but apparently only found their way into his work through indirect mediation through other authors, with Ephorus playing the most important role.