The title of this article is ambiguous. Further meanings are listed under Consulate (disambiguation) .

The (in technical terms often: the ) consulate (or consulate , Latin consulatus , therefore in technical language masculine ), the office or term of office of a consul (Latin consul ), was the highest civil and military office of the official career ( cursus honorum ) in the Roman Republic . It existed until late antiquity , but lost much of its political importance and power with the beginning of the imperial era.

Every year two consuls were elected by one of the Roman people's assemblies , the comitia centuriata , who first took office in March. Not until 153 BC The date was brought forward to January 1st, which has since been considered the beginning of the year, because the consuls were the eponymous (Greek: " eponymous ") officials of Rome, after whom the years were named (see list of Roman consuls ). The names of the two consuls were given one after the other in the ablative to indicate the year, e.g. B. means the indication Cn. Domitio C. Sosio consulibus on an event that took place in the year 32 BC. Occurred when Gnaeus Domitius and Gaius Sosius were consuls. A former consul ( consularis or consular) was always particularly respected and belonged to the senatorial elite. 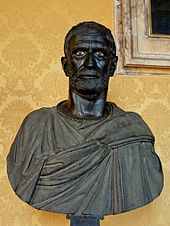 According to later tradition, the consulate was introduced in 509 BC. With the fall of the last Roman king , when Lucius Junius Brutus is said to have become the first consul of Rome. However, this information has been very controversial for a long time, as basically everything that Roman history before about 300 BC. Concerns. In the early days of the republic, office holders had to belong to the patrician class, which did not happen until 367 BC. Changed by the leges Liciniae Sextiae . With these laws at the end of the class struggles of the early republic , all important magistrates became accessible to the plebeians . Allegedly from then on a consul had to come from a plebeian family. The purpose of this regulation was probably the mutual control of the two estates.

After the Samnite Wars , from 290 BC BC, the circle of plebeian families who got into the higher offices solidified, and the two classes merged to form a new, largely isolated class of nobility, the so-called nobility . As a result, the class-specific control function became obsolete and the principle of collegiality only served to prevent abuse of office. Many, especially German, ancient historians today assume that the consulate was only created during this period, i.e. sometime between 367 and 300 years, while previously a single senior official, the praetor maximus , was at the head of the state. The consull lists were fictitious for the early days and only constructed afterwards.

In the republic the consuls were elected by the central committees. The prerequisite for applying for the office of consul was usually the clothing for the offices of the cursus honorum. Towards the end of the republic, applicants had to be at least 43 years of age to run. In order to prevent autocracy and abuse of power, the office was limited to one year (annuity) and shared equally between two consuls (collegiality). If a consul died while exercising his duties or resigned his office, a consul suffectus (suffect consul = substitute consul) was elected. If both consuls died, the Senate appointed an interrex to hold consular elections. In the crisis of 52 BC Chr. Was Pompey initially without election as sole consul ( consul sine collega ) appointed before he was a colleague after several months.

The consuls, together with the praetors, were the only Roman magistrates to hold the empire , and within their administration a decision could only be reversed or stopped by their respective collega with its veto (Latin “I forbid”) or by a tribune of the people . The empire also included the right to lead troops and to impose capital fines on Roman citizens, symbolized by the fasces . (In the later period of the republic, the curular aediles also occasionally acquired the empire.)

The consuls presided over the senate , in which they alternated monthly. They were entitled to the military command, in which they alternated daily in the event of war, provided that both were together in an army (the extent to which something has changed here since Sulla is disputed in research). They introduced bills to the Senate, the implementation of which the Quaestors had to monitor. Her tasks also included the inauguration of temples, the making of offerings and the auspices . The administrative tasks incumbent on the consuls were increasingly transferred to other officials, so that the consulate was primarily a political office.

The external identifying features of a consul were the right to the curular chair , the toga praetexta and twelve lictors who wore the fasces . Outside the pomerium , these fasces also included axes, symbolizing the consuls' right to have Roman citizens executed during war. When taking office, a procession, the processus consularis , was often held, which became more and more splendid over time.

A large proportion of the elected officials came from old families who had provided a consul in earlier years. As a rule, it was not only the year as an active consul that made the application for the office so worthwhile, but above all the fact that you only belonged to the power elite as a former consul. The former consuls, the consulares , formed a very influential group in the Roman Senate. If a citizen reached the consulate as the first member of his family (as homo novus ), this was tantamount to acceptance into the Roman nobility : the consul and his direct descendants were in fact ennobled. This happened only rarely at the end of the Roman Republic, but all the more frequently during the imperial era.

The office of consul - like the other state offices - was not remunerated; on the contrary, it was expected that the officials would bring their own assets into the state budget. This was compensated by the proconsular period, in which the consuls who had left office were assigned a proconsular province for administration, usually for a period of one or (less often) two years. They ruled there as governors with military command ( pro consule ) in contrast to the former praetors, who were mostly sent as governors without military command, even if they also had an empire in principle . Especially in the late republic, governance over a province offered the opportunity to massively enrich oneself, and one could hope to gain additional fame through military operations.

When exactly the consuls forfeited the greater part of their powers has long been debated in research. While some ancient historians assume that the decisive loss of power, especially with regard to the command of Roman troops, was already around 80 BC. Having entered with Sulla , most assume that this only happened in the first years of the Principate , when Augustus assumed the military powers of the office in 18 BC. Chr. Strongly circumcised.

During the imperial era, the office soon lost all real political influence. Tiberius entrusted the election of consuls and praetors to the Senate in AD 14, and the office was ultimately conferred only by the emperor; But it was still highly respected and in great demand, as its clothing still meant access to the imperial aristocracy. Until the 3rd century (up to Macrinus or Maximinus Thrax ), only consuls who had been consuls were considered “imperial”, as capax imperii ; Positions such as city ​​prefect , governor of Asia or Africa or a province with several legions were also reserved for consulars up to this time. The consulate was considered indispensable for a Roman res publica : There were also consuls in the Gallic Sonderreich , which temporarily fell away from Rome and existed from 260 to 274, but their names have not been passed down throughout.

Often the consuls only took over their office for a few months during the imperial era, in order to enable successors ( suffect consuls ) to be ennobled and qualified for the highest offices. It was therefore considered particularly honorable to be the ordinary consul (consul ordinarius) to name the year, and the greatest honor was to hold the office as a colleague of an emperor. Formally, however, former suffect consuls were also considered full consulars; this group included, for example, the later emperor Septimius Severus . It was only in the 3rd century that it became possible to be admitted to the Senate directly by the emperor with the rank of a former consul, without having held the office at all (adlectio inter consulares) . Consuls in office were increasingly expected to host magnificent games or chariot races, at least when they took office - until they were finally legally obliged to do so.

The consul ordinarius of the year 487, Manlius Boethius , in his trabea (ivory diptych )

Solidus of Herakleios from the year 608, showing him and his father as consuls

When consular rank ceased to be a prerequisite for important posts in the middle of the 3rd century, the suffect consulate lost a massive amount of reputation. However, this was by no means true of the ordinary consulate. Because even in late antiquity (4th to 6th centuries) the office was still often held by the emperors; Thus Theodosius II was a full consul eighteen times . The appointment of the annual consuls was now entirely up to the emperor, but the senate was still allowed to appoint suffect and honorary consulates. The incumbent ordinary consul was still considered the highest magistrate; he basically wore the toga picta or the trabea and - although now completely powerless in reality - had precedence over all other dignitaries except the emperor. As in the late republic, the two consuls continued to take office on January 1st, but now combined with a move (pompa) , donations of money to the people and army, and enormously expensive games or chariot races. One of the two, the consul prior , was always mentioned in the first place at least since the high imperial era and thus enjoyed a certain priority of honor. After the so-called division of the empire of 395 , a consul was usually (but not always) appointed by the east and west emperors; It was still dated nationwide after both. Even after the end of the Western Roman Empire in 476/80, this practice was maintained for several decades. In the Eastern Roman Empire , the consulate was finally effectively abolished under Emperor Justinian in 542, as he did not appoint any more consuls from that year, although shortly before he had emphasized the special importance of the office. The last Western Roman consul held office under the rule of the Ostrogoths in 534.

Nevertheless, memories of the enormous prestige that the consulate was associated with remained vivid in the West for a long time - for example, Gregory the Great was referred to as consul Dei ('Consul of God') in his epitaph . In Ostrom, after Justinian, the emperors took over the office once at the beginning of their rule; Emperor Maurikios clad it a second time in 602. In addition, a consular rank was given to some very high-ranking personalities without these having held the office itself; an example is Germanus .

Emperor Herakleios (610–641) was then the last to formally hold the consulate in his first year of reign. He and his father of the same name had previously been made consul in Carthage in 608 as part of his rebellion against Emperor Phocas - an extremely unusual step. The reforms carried out by this ruler to modernize and Graecize the empire included the final abolition of this ancient Roman tradition.