The cursus honorum ( Latin for 'official career') was the traditional sequence of magistrates through which politicians of the Roman Republic went and which in principle still existed in the Roman Empire .

With the abolition of kingship , the Senate took over the empire , the authority. It is no longer possible to reconstruct exactly when part of the government tasks were transferred to officials elected annually, the magistrates. According to legend, 509 BC The first two consuls were elected; but this tradition is often questioned. Perhaps there was only one praetor maximus at first .

In the following centuries the other offices and their usual order were formed:

For a long time it was basically possible to be directly elected to the highest offices without having previously held the lower ones. Which was established by law cursus only 180 v. In the Lex Villia annalis , as a reaction to the increased competition within the nobility , after a corresponding application in 199 BC. Had been rejected. Anyone who had held one of the offices of the cursus honorum was given preferential consideration by the censors when the Senate lists were drawn up and ultimately accepted into the Senate almost automatically. Initially only related to the consulate, praetur and curular aedility, from Sulla even the former quaestors and tribunes received a lifelong seat in the senate in this way. 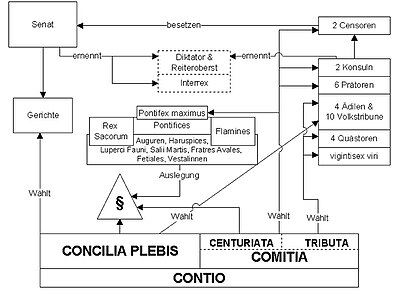 Schematic representation of the state structure of the Roman Republic since Sulla, i.e. 78 BC. Chr.

The magistrates were elected by the Comitia ; namely the lower, so-called plebeian magistrates (Quaestur, tribunate), whose authority was called potestas , from the comitia tributa , the higher, once patrician or curular offices, which had military command ( imperium ) (Praetur, consulate), from the Comitia Centuriata . The time of taking office seems to have shifted more and more in the course of history. In 153 BC Finally, it was moved for the last time: from March 15th (the Ides of March ) to January 1st. Since the years were named after the eponymous consuls, the Roman year began on January 1st. The tribune of the people took office on December 10th.

Senior officials were allowed to negotiate with the people and the Senate, take action against lower officials and make arrests. Depending on the office, they were entitled to a number of armed lictors . During the term of office they enjoyed immunity , only afterwards could they be held responsible for their actions (see Verres process ).

In the first few centuries, probably only patricians were allowed to take up the official career. After the class struggles in the 4th century BC It was open to all Roman citizens , at least in theory . Due to the Leges Liciniae Sextiae (so called from the Roman tradition and moved to the year 367 BC) one of the two consuls was even allowed to be a plebeian , the other had to continue to be a patrician. However, the offices were purely honorary, so that only descendants of wealthy families could afford political careers. It was customary to win over voters through bribery, and as a rule incumbents invested large sums of their private wealth in favor of the general public in order to be elected to the next higher office. That is why most of the applicants for offices came from noble families, the nobilitas . A non-aristocratic applicant for an office was referred to as homo novus (literally: "new man", translated: "upstart").

The Flamines were excluded from the cursus honorum , although mostly from the oldest and most respected families .

After their admission, applicants for an office had to wear a special white toga during the campaign for votes (ambitio) for the sake of conspicuity : the toga candida . The name candidatus derived from it has been preserved to this day. A public official was called a magistratus .

In addition to solvency , all magistrates had in common that

A prescribed minimum age was first introduced in 180 BC. Chr. In the Lex Villia annalis : After ten years of military service you could run for the bursary for the first time at 27. There should be a break of two years between the magistrates. With two consulates, ten years should theoretically be inserted. The last regulation in particular was violated several times towards the end of the republic, Gaius Marius was from 107 BC. Consul six times in a row.

After the end of the term of office, the imperium could be extended by consuls and praetors (so-called promagistrates ) (prorogatio).

State offices that were outside the cursus honorum , but for which holding one of the highest offices of the cursus was a prerequisite, were:

In addition to the political functions, the magistrates also had sacred functions, such as questioning the gods together with the priests.

Reforms of Sulla and end of the republic

Sulla issued 81 BC The Lex de magistratibus , which regulated the civil service career in a binding manner. Nobody was allowed to run for the consulate who had not previously been praetor. At the same time, he adapted the number of office holders to the growing needs of the empire vis-à-vis the city-state:

The cursus honorum comprised of Sulla:

The promagistrate now became a mandatory one-year governorship in one of the provinces following the praetur and the consulate. Because Sulla wanted to enlarge the Senate, a magistrate was admitted to the Senate after the bursary, without the censors having a say.

The Lex Cornelia de tribunis plebis , which restricted the power of the tribune and spun off the office from the cursus honorum , was reversed soon after Sulla's death. The other rules were sometimes deviated from in the late Roman Republic, for example , without having ever held an office , Pompey received 77 BC. A proconsular empire for the province of Hispania citerior and was established in 70 BC. Chr. Consul.

Since Sulla's reforms, elections have usually been held in the month of Quinctilis (Iulius). Since Sulla gave the main weight in the elections to the class of patricians and eques , the votes of the rest of the voters were as good as ineffective under his government. The elected took office in January of the following year. Only a few, such as Cicero , managed to hold all offices suo anno , i.e. immediately after reaching the lower age limit.

Caesar added 2 to the number of praetors and aediles.

After Augustus established a de facto sole rule with the principate , the republican offices were largely superfluous. Nevertheless, they retained their prestige, and so the tribunate, praetur and consulate continued well into late antiquity (the last non-imperial consul held the office in 541 under Emperor Justinian ). However, since 14 AD, the magistrates were no longer elected by the people, but appointed by the Senate or by the emperor himself. The entry age was also gradually reduced considerably.

In addition, Augustus created his own official career path for the knighthood , which led from military commands in the legions to administrative activities as imperial procurators ( Procurator Augusti ) to the prefecture , a high military or administrative leadership position, which could also include governor-like functions in a peripheral province (best known example is Pontius Pilate ). In some cases, men from simple backgrounds or notables from the cities were able to rise to the knighthood through certain offices, which was characterized by greater social permeability from below and above than the senatorial class and whose social and political weight increased sharply in the course of the imperial era. As early as the 1st century, cases are documented in which non-aristocrats were able to serve themselves up from legionnaires to the highest centurion ( primus pilus ) to knightly cohort prefect and in one case even to praetorian prefect . The career of Marcus Bassaeus Rufus, who held this office under Antoninus Pius , is also cited as an example . In general, the chivalric career was more geared towards military leadership positions and finance than the senatorial sons' sons of honor, which from the outset aimed at political office .