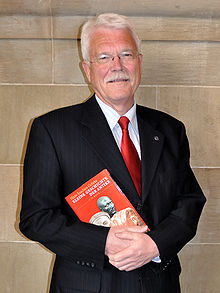 Hans-Joachim Gehrke at the Federal Congress of the German Classical Philologists Association 2010 in Freiburg im Breisgau with his book Little History of Antiquity .

Hans-Joachim Gehrke (born October 28, 1945 in Salzgitter-Lebenstedt ) is a German ancient historian . From 2008 to 2011 he was President of the German Archaeological Institute .

Hans-Joachim Gehrke, one of the most prominent German ancient historians, was a student at the Ratsgymnasium Goslar from 1961 to 1965 and passed his Abitur there in 1965. He then studied history and classical philology at the Georg-August-Universität Göttingen from 1967 to 1973 , where he received his doctorate in 1973 with a study on Phokion (doctoral supervisor was Alfred Heuss ), was a research assistant from 1973 to 1982 and completed his habilitation in 1982 . The subject of the very influential work published in 1985 was the phenomenon of stasis in classical Greece. From 1982 to 1984 Gehrke taught as a professor of ancient history at the Julius Maximilians University of Würzburg , and from 1984 to 1987 as a full professor at the Free University of Berlin . From 1987 to 2008 Gehrke held the chair for ancient history at the University of Freiburg . On July 11, 2007, Hans-Joachim Gehrke was elected President of the German Archaeological Institute; he succeeded Hermann Parzinger in this function on March 1, 2008 . In the same year he received an honorary professorship for the subjects of Ancient History and Classical Philology at the Free University of Berlin. In 2011 he retired; his successor at the DAI has been Friederike Fless since April 1, 2011 .