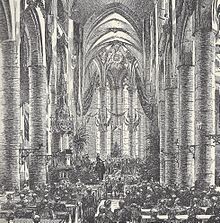 The honorary doctorate is an honorary conferred award of a university or faculty that for special academic , scientific can be awarded, cultural or public services also to non-academic people. A with the honor doctorate doctorate person as honor doctor designated (Latin Doctor honorary 'Doctor ehrenhalber "abbreviated Dr. h. C. Or h Dr. E.,. In the theology also D. ).

Certificate from the University of Erlangen ( Jürgen Gebhard , 1998)

The term honoris causa (h. C.) Is Latin and means "honorary" (originally "honorary" or " because of honor "). The entry of the honorary doctorate in a German passport is usually carried out as “DR. HC. "Or" DR. EH. "And thus in contrast to doctoral degrees that are entered as" DR. "Without any further addition. The honorary doctorate, but also clerical titles, are not academic degrees and must not be presented as such or confused with them. Such intent to deceive (pretending to hold an academic degree) is punishable in Germany under Section 132a of the Criminal Code. If a person has received three or more awards, the abbreviation Dr. H. c. mult. common (in Austria DDr. h. c. ), which stands for honoris causa multiplex , i.e. multiple honorary doctorates. With (only) two honorary doctorates, the abbreviation Dres. H. c. , i.e. doctores honorum causa , which is, however, incorrect according to the rules of Latin grammar and logic, since doctores always denotes a plurality of persons ( Drs. Schmitz and Meier) and never a plurality of titles.

The honorary doctorate is primarily intended to be awarded on the basis of outstanding achievements in the scientific field. The honor is often given on the occasion of general or direct services to the university or faculty , even if this is usually not a formal requirement. A typical case is the award of an outstanding scientist who has made a special contribution to the faculty as the founding dean (such as Manfred Broy or Thomas Hillenkamp ). The honorary doctorate is often awarded for political, financial or other reasons, for which the excellence of the academic achievements of the recipient is not always recognizable. In an international comparison, German universities are cautious about the award.

The honorary doctorate is an honor for merits and not an academic degree of a doctor , which is awarded after a degree and doctorate completed with a university examination . No examination is planned for the award of an honorary doctorate. The procedure and the exact conditions for the award are regulated by the doctoral regulations of the university faculties. As a rule, the honoree holds a lecture on the occasion of the award.

The University of Leipzig has the title of Dr. H. c. awarded for the first time in 1805 (first to a woman in 1946: Katharina Kippenberg ). Josepha von Siebold was the first woman in Germany to be awarded the title in 1815 (from the University of Giessen in the subject of " Maternity "). For the technical universities in Prussia , the honorary doctorate right - as well as the right to award doctorates per se - was only introduced in October 1899 by decree of Kaiser Wilhelm II .

According to research by the magazine Der Spiegel in 2012, honorary doctorates can be acquired, ie “bought”, especially at less well-known universities abroad, through financial contributions and donations. There are numerous providers on the Internet who would be helpful in this promotion fraud.

The Doctor of Humane Letters ( Latin Litterarum humanarum doctor ; DHL ; or LHD ) is awarded on an honorary basis, in the ecclesiastical and theological area as an ecclesiastical honorary doctorate the Doctor Divinitatis or Doctor of Divinity (DDiv).