from Wikipedia, the free encyclopedia
This is the spotted version , flagged on April 9, 2020 . There is 1 pending change that has yet to be viewed. 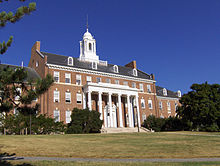 HJ Patterson building of the UMCP

The University of Maryland, College Park (also known as UMCP ) was 1858 in College Park in the US state of Maryland northeast of the capital city ten miles Washington, DC , as the Agricultural College established (Agricultural College). In autumn 2015, 27,443 students were enrolled in the bachelor's and 10,697 students in the master's courses . About 75 percent of this comes from the state of Maryland. The gender distribution among the students is approximately 1: 1. The college is the main campus of the University System of Maryland . It is a member of the Association of American Universities , an association of leading research-intensive North American universities that has existed since 1900, and is considered Public Ivy .

Land was purchased for the Maryland Agricultural College in 1858 on a farm in what is now College Park. A year later the agricultural school was opened, and 34 students enrolled. The first degree was awarded in 1862. Both sides were on the site during the American Civil War . On April 24, 1864, 6,000 men of the Ninth Division of the Northern States stayed overnight on the campus on their way to Virginia . Only about two months later, on June 11, 400 Confederate men stayed overnight on campus. The college was partially nationalized in 1866.

In 1916 the name was changed to "Maryland State College". That year the college was also opened to female students. In 1917, seven departments were created: agriculture, engineering, art, science, chemistry, teaching, home economics and a graduate school (college for postgraduate studies). In 1919, the first woman obtained a bachelor's degree. A year later they merged with the established technical schools in Baltimore and the University of Maryland was founded . The Graduate School awarded the first doctoral degrees. The student newspaper Diamondback , which is still printed today, was founded in 1921.

In 1988 it was officially renamed the University of Maryland, College Park . 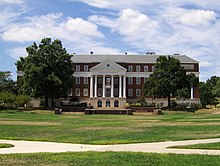 McKeldin Library of the UMCP

The university's sports teams are called Terrapins . The university is a member of the Big Ten Conference . The college football team and the men's basketball team are well known. The basketball team won the 2002 NCAA National Championship. The women's team also won the 2006 national championship. In 2012 the UMCP footballers won both the regular season and the postseason in college soccer at the Atlantic Coast Conference .

The following well-known personalities are or have been active at the university: