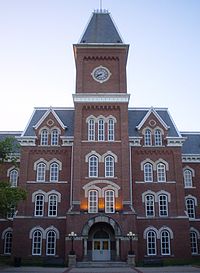 The University Hall of the OSU

The Ohio State University ( OSU ) is one of the largest universities in the USA , consisting of the main campus, which is located in Columbus , and the subsidiary campuses in Lima , Mansfield , Marion and Newark .

With 57,466 students (2012) and around 5,000 employees, the Columbus campus is the fourth largest contiguous campus in the USA (2012). Ohio State University is one of the best state universities in the USA, a so-called Public Ivy . Best known for her courses in languages, teaching, and the arts, it is one of the top twenty public universities in the United States and the best in Ohio , according to US News . She is also a member of the Association of American Universities , an association of leading research-intensive North American universities that has existed since 1900. Their motto is “ Disciplina in civitatem ”.

The Ohio State University was founded in 1870 under the name Ohio Agricultural and Mechanical College and has also been open to students since 1873. The university was originally located on the northern edge of Columbus in an agricultural area. For this reason, only mechanical and agricultural training degrees should initially be awarded. In 1878, however, the educational offer was also expanded to other areas, which led to the university changing its name frequently, until it finally adopted its current name.

Until 1998 the OSU operated the radio telescope The Big Ear , the largest and most durable radio telescope of the SETI project. In 1977 it attracted international attention when it received the wow signal .

The university's sports teams are called Buckeyes (English for " horse chestnuts ") and participate in Division I of the NCAA . Her mascot is called Brutus . Sporting events - especially football games - often take place at Ohio Stadium , popularly known as the Horseshoe due to its horseshoe shape and seating over 100,000 spectators.

The Swiss national soccer player Lara Dickenmann completed an economics degree until 2008 and also played on the university soccer team .

The three-time Swiss record holder in swimming , Stefan Sigrist from Schaffhausen , like Lara Dickenmann, completed a degree in economics and political science until 2010 and also trained in the university swimming team. In 2010 he won the Big 10 Championships with the Buckeyes.

In addition to its television station called WOSU-TV, which is closely related to the public television company PBS , the university operates the two radio stations WOSU-AM and WOSU-FM (supported by NPR and BBC ). The television program has been broadcast in HDTV since 2003 . The university newspaper is called The Lantern (German: " Die Laterne "). The university also produces the literary magazine Mosaic . In addition to the university's official media, there are also student-operated media, such as the radio station The Underground , which, however, is broadcast exclusively on the Internet due to the lack of available frequencies, and the television station Buckeye-TV , which mainly broadcasts on the university's own cable network. The monthly newspaper The Sentinel (German: Die Wache ) is also distributed by students, but does not achieve the distribution of The Lantern .