Radio telescopes are instruments for receiving and measuring the radio frequency radiation coming from space or special celestial objects . They are the most important tool in so-called radio astronomy .

The antenna usually has the shape of a parabolic mirror . For shorter electromagnetic waves in the cm to dm range, the reflector must have a smooth surface, for longer waves a grid structure is sufficient . 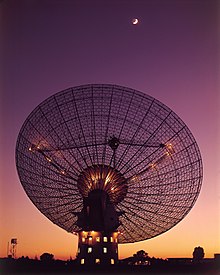 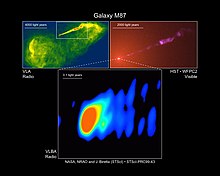 After Karl Guthe Jansky discovered the first extraterrestrial radio source in 1932, radio telescopes were developed for observing the cosmos. The first radio telescope in parabolic form was built by Grote Reber , engineer and radio amateur in Wheaton, Illinois, because Jansky's discovery was initially ignored by professional astronomy. In Germany, the first radio telescope, the Stockert astropeiler on the Stockert near Bad Münstereifel , was built in 1956. It has been a listed building since 1999.

West-facing German radar systems for air surveillance always delivered false alarms when the constellation Swan (Cygnus) appeared on the horizon - caused by the radio source Cygnus A located there . In 1946, a research group at the Royal Radar Establishment in Malvern (England) discovered that a tiny region in the constellation Swan emits intense radio waves.

Most radio telescopes are parabolic- shaped metal surfaces that bundle the radio waves onto an antenna that is located in the focal point of the concave mirror. The whole system is also generally referred to as the antenna. Today's radio telescopes often consist of several parabolic antennas ( arrays ) and the evaluation station. The antennas of an array are coupled together to form an interferometer , effectively resulting in an antenna with a larger diameter. This technology can also be extended beyond the array to the entire globe: If radio telescopes distributed over the entire earth observe the same source at the same time, the angular resolution of the radio telescopes can be increased considerably. The largest systems exceed the resolution of optical telescopes by a factor of around 500, as can be seen in the adjacent picture.

In radio telescopes, a distinction is made between immobile and movable telescopes. Fixed telescopes are rare because they cannot be rotated in their orientation. They usually point their parabolic antenna at the zenith (for example the Arecibo telescope, which is firmly established in a lowland). Movable radio telescopes can be rotated so that they can "look" into the entire hemisphere .

In addition to the size of a radio telescope, which is a measure of its sensitivity, it also depends on the range of wavelengths it can cover. While the large telescopes can only observe wavelengths in the meter and centimeter range, the smaller telescopes, such as the 30 m telescope from the Institute for Radio Astronomy in the millimeter range (IRAM) in Spain, and the 3 m telescope KOSMA in Switzerland im Millimeter range or the 12 m telescope APEX (operated in the Chilean Atacama Desert by the Max Planck Institute for Radio Astronomy , millimeter and submillimeter waves) in shorter wavelength ranges. Since these frequencies lie outside the atmospheric window , the sensitivity of the air envelope above is greatly reduced.

In addition to observing celestial bodies, radio telescopes are also used to receive data from distant space probes or to send commands to them or to search for extraterrestrial intelligences (see SETI project ).

There are several projects in which radio telescopes over long distances or even worldwide (globally) are involved in recordings with Very Long Baseline Interferometry (VLBI), such as the Very Long Baseline Array (VLBA), the Event Horizon Telescope or the Global mm-VLBI Array . For this purpose satellites are also used ( RadioAstron ).

The currently largest radio telescope in the world is the Russian RATAN 600 near Zelenchukskaya . The second largest is the FAST observatory , which went into test operation on September 25, 2016 in the Chinese province of Guizhou .

Other large radio telescope arrays are the Giant Metrewave Radio Telescope (GMRT, 30 individual telescopes per 45 meters, spread over a distance of up to 25 km, six frequency bands from 50 MHz to 1.5 GHz) in India , 80 km north of Pune in the state of Maharashtra and the Very Large Array (VLA, 27 telescopes each 25 meters in a Y-shaped configuration) in Socorro , New Mexico , USA .

Since 2006 a new type of radio telescope has been built in the Netherlands for observing low-frequency radio waves in the meter-wave range, the Low Frequency Array (LOFAR). At the time of its inauguration in June 2010, it had around 10,000 antennas across Europe. The first LOFAR station has been working next to the 100 m Effelsberg telescope since 2007. LOFAR is a prototype for an even larger radio telescope, the Square Kilometer Array (SKA), construction of which is scheduled to begin in 2021. The first observations are expected to be possible in the mid-2020s.

An important project to explore the universe that is being carried out with the help of the radio telescopes is HIPASS . Here, the hydrogen signature as an indicator for galaxies is searched for in a distance-sensitive manner . The southern hemisphere area has already been completed. Most of the data was collected from the Parkes Radio Telescope in Australia.