The Green Bank Observatory is a partially government-sponsored research and development organization for radio astronomy based in Green Bank in the US state of West Virginia .

The main instrument of the Green Bank Observatory is the Robert-C. Byrd Green Bank Telescope ( GBT ). With a diameter of 100 × 110 meters, it is the largest fully articulated radio telescope in the world.

When it went into operation, after 29 years, it pushed the German radio telescope Effelsberg off the top of the list of the largest fully articulated radio telescopes in the world. The GBT is located in the National Radio Quiet Zone , where the operation of most sources of radio waves is strictly regulated or prohibited. Only diesel vehicles are permitted in the vicinity, as they have no spark plugs and therefore do not cause any electromagnetic interference.

The observatory was operated by the National Radio Astronomy Observatory , headquartered in Charlottesville, Virginia , until September 30, 2016 . Since October 1, 2016, the Green Bank Observatory is no longer part of NRAO, but an independent observatory (Green Bank Observatory). Most of the funding is still subsidized by the state, but now also partly through private projects. The largest private project is currently the Project Breakthrough Lists, searching for signals from possibly existing technical civilizations in space . As of January 2016, 20 percent of the GBT's observation time has been used for breakthrough lists.

In November 1961, the first SETI conference of scientists from various fields took place in the Green Bank Observatory . There they discussed possible life in space and the search for it. One result of this meeting is the so-called Drake equation . 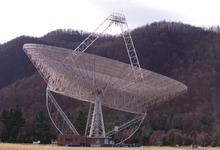 In 1961 and 1962, a 300-foot (90-meter) radio telescope was installed at Green Bank, which was then the largest radio telescope in the world. This was equipped with an improved surface and a shielded control room in the early 1970s. Due to the failure of a structural element, this telescope collapsed on November 15, 1988 at 9.43 p.m. The formation of a crack could be reconstructed from the data recording. It could only be swiveled uniaxially - north to south. It worked like a transit instrument with a transit time of 40 seconds. By shifting the receiver in the focal point of the dish, however, the rotation of the earth could be compensated to a certain extent and a point in the fixed star sky could be sighted for a few minutes.

The Robert C. Byrd Green Bank Telescope mentioned above was built as a replacement.

In addition to the Green Bank telescope, there are a number of other older radio telescopes on the premises of the observatory, some of which are still used for scientific projects or for training purposes. There is also a new visitor center with exhibitions on radio astronomy and the history of the Green Bank site . The observatory has a runway for planes.

The Reber Telescope has been listed as a structure on the National Register of Historic Places since November 1972 . In December 1989, the telescope was granted National Historic Landmark status .