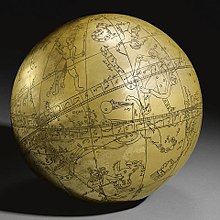 in the case of a celestial globe , the celestial sphere is viewed from the outside (Persia, approx. 1782, reign of the Afsharids )

For an earthly observer, all the stars appear at the same distance, which is why the idea of ​​a huge celestial sphere arose early on. It is also called the celestial sphere or firmament , which is derived from the ancient world model of the spheres : The stars were thought to be "attached" (Latin firmamentum , "means of attachment") to one of the transparent, rotating crystal spheres of the sky .

The observer only ever sees half of the celestial sphere, which was clear from the rotating night sky thousands of years ago. Both hemispheres are separated by the horizon. In the daytime and in misty air, however, one has the impression of not standing exactly in the center, but under a flat bowl - which is the basis of the old Babylonian worldview. An extensive survey of school children in the 1950s showed that the blue sky appeared to them ~ 1 km high, but the horizon 3-4 times further away.

The Nebra Sky Disc from the Bronze Age is the oldest preserved representation of the starry sky .

The Spherical astronomy uses the mathematical model of the unit sphere to the position of celestial bodies in an equatorial coordinate system specified. This system rotates - because of the earth's rotation - once per sidereal day (23:56 hours). The sphere, if it is thought to be infinitely large and geocentric, has its poles in the extension of the earth's axis . The straight line through these poles is called the celestial axis. The celestial equator is accordingly the projection of the earth's equator onto the sphere. The axis of the topocentric celestial sphere is parallel to the earth's axis, the celestial equator lies in the plane through the respective location that is parallel to the equatorial plane of the earth . Observed coordinates are always topocentric and have to be converted into geocentric ones if necessary. The difference between geocentric and topocentric celestial spheres increases the closer the celestial body is.