Model of the earth with equator (red), parallel circles of latitude and meridians starting from the poles

The equator of a planet or other ellipsoid of rotation celestial body is the great circle assumed on its surface , on whose plane (the equatorial plane ) the axis of rotation is perpendicular. The earth's surface is divided by the equator into a north and a south half , which is where the Latin name "Gleichmacher" (old: "Equal") comes from. It is the reference circle for the parallel small circles that are used to dimension the earth in north-south direction with the help of circles of latitude . He himself has the geographical latitude 0 °.

In geometry , the term equator is generally applied to the sphere in connection with an axis defined by its center .

Length and diameter of the equator 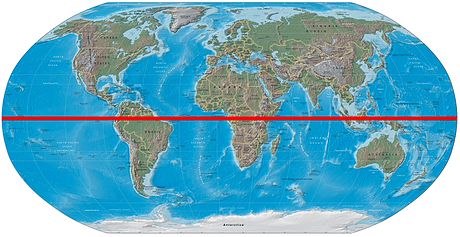 The equator on a world map in the middle between the Arctic (in the north, above) and Antarctica (in the south, below).

The length of one nautical mile was originally the equatorial arc over a minute of arc and was 1.853 kilometers in relation to an average earth radius of 6370 kilometers.

States, islands and cities on the equator

The equator crosses the continents Africa , Asia ( Indonesia ) and America ( South America ) as well as the three oceans Atlantic , Pacific and Indian Ocean . It reaches its highest point at over 4500 meters on the southern flank of the Cayambe volcano in Ecuador. Due to the retreat of the glacier , the point has been free of ice since around 2006 - before that, it was the only place on the equator to be covered with snow all year round.

The continental states crossed are:

Island states with one or more islands on the equator are:

Island states with islands on both sides of the equator are the Maldives in the Indian Ocean and Kiribati in the Pacific Ocean .

The following capitals are approximately on the equator:

Directly crossed by the equator:

Because of the slight periodic movements of the earth's axis, the current equator can be up to ten meters away from the central equator.

Older equatorial monument (around 1980) near Quito , about 240 m south of the equator

Equator in names of states and provinces

Two states refer to the equator in their names: Ecuador and Equatorial Guinea .

After 1801 there was France Equatorial in South America for a short time ( Equatorial France , southern expansion of French Guiana), until 1958 there was also the colony of French Equatorial Africa .

To this day, Equateur is the name of a province in the Congo.

Climate at the equator

On both sides of the equator, there is the climate of the tropics . Due to the high position of the sun at the equator all year round, the irradiation is high and almost constant. The consequences are an almost constant cloud formation and a correspondingly constant level of precipitation. Characteristic of the so-called equatorial climate is a year-round mildness; Seasons like summer or winter z. B. in European standards do not occur. However, near the high mountains, foehn winds on the leeward side can cause longer dry periods.

In addition to the geographic equator, there is the magnetic equator, which is determined by the earth's magnetic poles, and the climatological thermal equator .

A ritual common in seafaring when crossing the equator for the first time is the equator baptism .

In the course of geological time , the spatial position of the earth's body changes relative to its axis of rotation. As a result, the geographic poles "migrate" on the earth's surface and with them the equatorial plane and thus the earth's equator. Two large polar movements of more than 50 ° there and back probably occurred about 800 million years ago.

Equator in the figurative sense

The term equator jokingly stands for an imaginary boundary line. So called