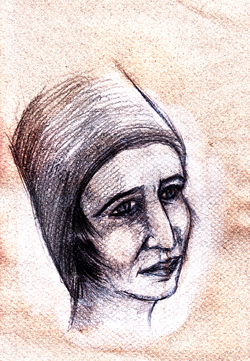 Ayn Rand ( ˈaɪn ˈrænd , actually Alissa Sinowjewna Rosenbaum , Russian Алиса Зиновьевна Розенбаум , scientific transliteration Alisa Zinov'evna Rozenbaum ; January 20 jul. / February 2,  1905 greg. In St. Petersburg - March 6, 1982 in New York ) a Russian-American bestselling author who also spoke on topics of economics, political philosophy and ethics . The atheist represented a variant of libertarianism and u. a. the view that morality is based on rational self-interest and an unrestricted capitalism . Her books reached a total circulation of 25 million copies. Rand is one of the most influential and widely read political writers in the United States .

Childhood and Adolescence in Russia

Ayn Rand's parents were Russian Jews ; her father was from Brest-Litovsk , her mother from St. Petersburg. When she was nine, she decided to become a writer. In 1917, she witnessed both the February and October revolutions . Her family's possessions (her father was a pharmacist) were expropriated. As a result, the family became impoverished and soon after moved to Ukraine and a short time later to Crimea , where the sixteen-year-old graduated from school in 1921. In the same year the family went back to Petrograd , where Rand studied philosophy and history at the Petrograd State University . In 1924 she went after successful completion of studies at the State Institute of the Arts film to the script writing to learn. Towards the end of 1925 she received an exit visa for a limited visit to her relatives in the USA. On January 17, 1926, she left her hometown and never returned.

Rand reached Manhattan on February 19, 1926 . She stayed with relatives in Chicago until August ; during this time she also extended her visa . Then she went to Hollywood to work as a screenwriter. Shortly after her arrival she met the film director Cecil B. DeMille , who she employed as an extra in his film King of the Kings (1927) ; here Rand met her future husband, Frank O'Connor. She later wrote film scenarios for DeMille and had a permanent position at RKO Pictures in costume management. In 1931 she became a US citizen. Rand sold her first screenplay, Red Pawn , to Universal Pictures in 1932 . Rand's first play Woman on Trial premiered in Hollywood in 1934.

In 1936 Ayn Rand's novel We the Living (German: From life undefeated ) was published. Based on their youthful experiences in Russia, the work portrays collectivist systems as evil. In the 1930s, sometimes referred to as the Red Decade in the United States , many American intellectuals, including John Steinbeck , felt strong sympathy for the political left. Because of Rand's sharp criticism of the Soviet Union and communism , many publishers rejected the book; The book was not well received by critics and intellectuals either.

Rand's second novel, The Fountainhead (German: The Origin or The Eternal Source ), on which she wrote for over four years, came out in 1943 by the Bobbs-Merrill Company. In it, Rand outlines her moral human ideal, embodied by the protagonist Howard Roark. The Fountainhead became a bestseller two years after its release. The filming under the same title The Fountainhead (director: King Vidor , German: A man like explosives ) was delayed due to the Second World War until 1949. Rand also wrote the screenplay for this film.

The story Anthem (German: Hymne or Die Hymne des Menschen ), which was written at the same time as The Fountainhead , is thematically related to Yevgeny Samjatin's We and George Orwell's 1984 : the individual experiences the oppression of an all-powerful government. The protagonist Equality 7-2521 rebels in the story against the state and rediscovers his own individuality and the forgotten history of humanity in a painful struggle .

Atlas Shrugged (German: Atlas throws off the world or Who is John Galt? Or The Strike ), published in 1957, is Ayn Rand's last novel and her main work. It is about the role and effects of philosophical principles in a society. After finishing work on the novel, Rand fell into severe depression. Atlas Shrugged became a bestseller and, like all of Ayn Rand's other books, continues to sell in large numbers today. 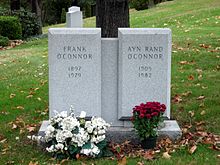 In the following years, Rand tried to apply her ideas to current social events by writing articles, editing magazines and appearing publicly. Several anthologies were created dedicated to their ideas.

Rand was a long-time smoker and had to undergo surgery for lung cancer in 1974 . In 1976, despite strong concerns of her own, she had her attorney's social worker enroll for benefits under the state social security and Medicare program. She received the services in the name of Ann O'Connor. Ayn Rand died of a heart attack on March 6, 1982 in New York . Her funeral was attended by many of her prominent admirers, including Alan Greenspan .

In the novel Atlas Shrugged , Rand also summarizes her own ideas, which she gives the generic term “objectivism”, in literary terms. It is based on a reality that is independent of human consciousness (in this sense “objective”). The mind can recognize these through reliable observation , application of concepts , logic , etc. Rationality is also a main virtue of ethics . By this, Rand understands the use of the mind in the pursuit of a "highest value", which Rand identifies with human life . The self-worth of life has the central function of making it possible to draw conclusions from the nature of man as a self-sustaining being on "objective" values and virtues. What is of value is what promotes the life of the individual. Rand speaks of “rational egoism ”, by which she understands sensible, productive action for one's own benefit and while safeguarding the negative protective rights of other individuals (essentially the right to life, freedom and property in the sense of a defense against physical, i.e. also “structural” violence ). These rights are viewed as a prerequisite for people to live together in society in a way that is conducive to life. The only task of a state is to protect these rights by averting danger. Any initial use of force against a citizen of the state should therefore be prevented or punished. In contrast, it largely rejects positive protective rights in the sense of active help to survive. So Rand advocates so-called laissez-faire - capitalism .

While Ayn Rand's publications are largely ignored or criticized in the field of philosophy, Ayn Rand has a great influence outside of the field as an author on political topics, especially in the USA.

A survey by the Library of Congress asked readers which books had changed their lives. After the Bible , Rand's work was named Atlas Shrugged second . Rand's effect was compared to that of Karl May .

Cult-like behavior has been described for some circles of followers, as early as 1972 by Murray Newton Rothbard , himself an influential thinker of libertarianism , and extensively in Jeff Walker's monographic study on Rand's popular reception. In particular, the Ayn Rand Institute is supported by Walker and others with e.g. B. Scientology compared.

In the 2016 comic book Supercrash - The Age of Selfishness by the British author Darryl Cunningham , the close teacher-student relationship between Ayn Rand and Alan Greenspan is thematized and an at least indirect causation of Rand's philosophy for the financial crash of 2008 is implied.

In contrast to the massive impact in the United States , Rand's works have remained relatively unknown in Germany for a long time. Since the beginning of the 21st century, a number of her works have been reprinted or translated. Her main work Atlas Shrugged was first translated as Atlas throws the world from 1959, another edition appeared under the title Who is John Galt? and in 2012 a new translation appeared under the title The Strike .

Reception in US politics

Alan Greenspan , US economist and later President of the Central Bank of the United States , was close friends with Rand, published in Rand's books and adopted political and economic ideas from Rand. In an interview, Greenspan describes his development: “Before I met Ayn Rand, I was a freelance market economist in the sense of Adam Smith, impressed by the theoretical structure and efficiency of the markets. I owe her the insight that capitalism is not only efficient and practical, but also moral. "

At the protests against the health care reform by Barack Obama 2009, played Ayn Rand Institute and its chairman Yaron Brook an important role. Michael S. Cullen says that Rand preached with her books for years to a world in which the hero says: Only I count, the community doesn't count, the government is terrible and has to go, the government prevents my happiness. "This kind of philosophy has been absorbed into their mother's milk by some tea party followers ."

Reactions to Rand in Philosophical Science

Michael Huemer tried to show in a longer essay that the so-called "objectivism" contains several verifiable errors. In another essay, he argues that the central argument in Rand's The Objectivist Ethics , which he reconstructs in 12 steps, already contains eight serious shortcomings.

Robert Nozick maintains the basic argument of Ayn Rand for a logical fallacy , especially since it does not explain why it irrational be need to prefer one's own death and non possession of values; their defense of egoism is therefore incomprehensible, nor is Rand's reaction to Hume's law .

One of the exceptions in the philosophical reception is the monograph by Tara Smith, which tries to reconstruct Rand's virtue ethical ideas by presenting the seven individual virtues accepted by Rand and defending this approach by Rand.

The journal Reason Papers , in which philosophical scholars also publish, has a. a. a special edition on ideas by Ayn Rand.

Collections and editions of works

Michael Paxton's documentary Ayn Rand: A Sense of Life was nominated for an Oscar in 1998 .

Barbara Branden's biography The Passion of Ayn Rand was filmed for television in 1999 by Christopher Menaul with Helen Mirren in the title role. The film focuses on Rand's affair with Nathaniel Branden, Barbara Branden's first husband, who is 25 years his junior.

All watched over by machines of loving grace (2011) by Adam Curtis deals with Rand's influence on the Californian ideology , especially in Part 1 Love and Power .