This article deals with the original film. The book as a guide for writing film scripts can be found under The Script . 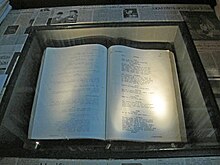 The Godfather , a script by Mario Puzo and Francis Ford Coppola .

A screenplay (also called a film script or script , especially historically also a film drama ; in film practice often just called a book ) is the textual basis of a film or feature film . The writer of a screenplay is the screenwriter . Filmmakers from other trades use his template to make organizational, technical and artistic decisions.

The feature film -Drehbuch, the plot and the dialogues of a fictional film scene by scene, in the final version sometimes setting for adjustment. The information in a script are focused on the visible and audible essentials of the plot. It includes figures , props , equipment , light and weather situations, noises and voices, provided they are relevant to the plot. Screenplays are also used in action-packed video games as well as in documentaries .

Screenplays can adapt novels or dramas for the film ( adapted screenplay ), or they arise from an original idea of ​​the author or one of the filmmakers involved (original screenplay ) .

The script is generally not viewed as an independent literary genre , but scripts are also published. Successfully filmed scripts or scripts that are not intended for film production and are consumed by the reader like a reading drama are published.

Screenplays were not needed at the beginning of film history . The interest in a staged or dramaturgically designed action like in a play arose only slowly. Films were made without written planning or after rudimentary recordings. In addition, texts from other media were sometimes used, such as newspaper reports for re-enactments of famous boxing matches.

The film pioneer Georges Méliès was the first to recognize the narrative potential of the young medium and from 1896 made exclusively staged films. At that time, the corresponding theater plays themselves were used to film theater plays, and the first scripts - the earliest surviving ones date from 1904 - do not differ formally from drama . These first scripts are called Scenario , the term probably comes from the Commedia dell'arte .

Authors have been mentioned sporadically in films since 1905 and regularly since 1912 . At that time, films were even assigned to authors, as in drama. By 1909 the scripts became more detailed; the first fully developed American script was written by the actress Gene Gauntier : From the Manger to the Cross (USA 1912). American, but also French Passion Play played an important role in the development of long forms of film and thus in the development of the script. At this time, the script gained in importance, thanks also to producer Thomas Ince , who worked with authors to develop a so-called continuity script as a template for the film. For the first time, information on how to write scripts was found in film magazines. In the USA, the Scenario Fever was also created , with which screenwriting became a popular sport, numerous prizes were announced. The fever ends with the establishment of the American studio system and the permanent employment of authors.

Recognized writers and playwrights have now been won over to the writing of screenplays. Their reputation helped the film gain artistic recognition and a wider audience. A first German example is Paul Lindau , who wrote the screenplay for Der Andere (Germany 1913). The Italian writer and poet Gabriele D'Annunzio designed tablets for Cabiria (Italy 1914). And there are also attempts in the USA, for example by Samuel Goldwyn , to win over well-known authors for the studio production, but the scripts and films are “too literary”.

In the course of the 1920s , at the latest with the advent of the talkie , the screenwriter became a regular employee in film production. With the sound film, the script also finds its (almost) final form, the master scene script. 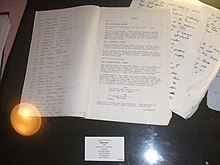 Batman , a script by Sam Hamm and Warren Skaren .

The script development establishes a contractual relationship: the author undertakes to develop the narrative material , for which he is entitled to the producer's services. The work on a script takes place in several development phases and along different text forms, for example for submission to production companies, television broadcasters or for film funding . Not all of these phases are always passed through, some of them however several times.

The outline is similar to the exposé in the literature is the basic fabric idea, the tension buildup , the characters and their actions. In the treatment , the plot and its background are formulated and narrated chronologically. A division into scenes has usually not yet taken place. There are different views on the length, depth of detail and the distinction between the individual text forms. An exposé can be two to four or 15 to 20 pages long, which in turn can be understood as a treatment elsewhere. In addition, a distinction can be made between treatment and scenario (also image treatment , where image is synonymous with scene , see image in the theater ), a detailed scenic form. When working together, it is often necessary to agree on the ideas and expectations of the text to be produced.

The script development is accompanied by meetings with the production partners during these steps. Directors and, if necessary, dramaturges or script doctors are also involved in the process. With the consent of the writer and producer (and often broadcaster), the writer finally begins to write the script. Scripts are revised in several versions, taking into account the inspiration of the director, the producer or other filmmakers involved in the development of the script. Early versions may only contain brief suggestions for specific settings and other decisions by other trades, but a detailed shooting script is created before the shooting . Several months and many discussions pass before the film is ready. Often several authors are working on a book, and it can happen that the original author is no longer involved in the creation of the film.

The page of a sample script.

In the past, the formal design of the script differed in Europe and the USA; For a long time in Europe, for example, the visible and the audible in film were written side by side in two separate columns. In the meantime, the American script form, the Master Scene Format, has established itself . It has existed in its current form around the middle of the 20th century. This also explains the Courier font used , a typewriter font with a fixed character width . The table format is still used sporadically in documentary films or as a template for film editing .

In addition to the font, the American script form also standardizes the font size and layout . The big advantage is that in most cases one page of the script corresponds to about one minute of film . This does not apply exactly to each side, but it usually balances out. The script for a film of 90 minutes consists of about 90 pages. This means that the scriptwriter already knows when writing, based on the page number , in which film minute a scene is approximately. However, this rule of thumb does not apply to scripts with little dialogue or an unusual narrative form.

A script is divided into scenes , which are differentiated from one another according to time and space. A change of scene or a jump in time mean the end of the old scene and the beginning of a new one. A new scene begins with a heading in capital letters indicating the place and time of the scene. For film production, locations are differentiated according to interior and exterior motifs and times are reduced to day and night, rarely twilight , i.e. to the availability of natural light.

The heading is followed by a description of the scene, for example the characters, props, equipment, background noise, the weather and the observed actions - if and only to the extent that they are of importance for the film and not yet described in an earlier scene were. Settings, camera instructions and sounds are capitalized.

If characters speak, the character names, including the dialogue text and, if necessary, spoken instructions that do not result from the action, are shown indented. The dialogue comment Off or OS for Off Screen means that the speaking figure is in the scene but cannot be seen in the picture, while VO for voice-over denotes a voice that enters the scene in post-production is inserted.

Wikibooks: How to Write a Screenplay  - Learning and Teaching Materials