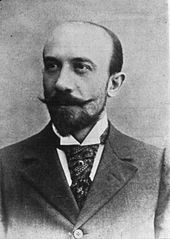 Georges Méliès [ melˈjɛs ] (born December 8, 1861 in Paris , † January 21, 1938 ibid) was a French illusionist , theater owner, film pioneer and film director . Méliès is one of the pioneers of film history and is considered the inventor of the "narrative film" and the stop-motion - film technology .

Marie-Georges-Jean Méliès - third son of the wealthy shoe manufacturer Jean-Louis-Stanislas Méliès and his wife Johannah Catherine Schuering - started school at the Lycée du Prince Impérial at the age of seven. During the Franco-Prussian War, he retrained at the Lycée Louis-le-Grand in 1870 , where he obtained his Baccalauréat in 1880 . His artistic talent was already evident at this time. From November 1881 to November 1882, Méliès did military service. He then hoped to be allowed to attend the École des Beaux-Arts , but his father forbade him. To prepare for work in his father's factory and to improve his English, his parents sent him to London for a year in 1884, where he worked for a business friend of his father's. As his language skills were not yet sufficient to understand performances in spoken theater, he regularly attended the magical performances in the Egyptian Hall by John Nevil Maskelyne and Méliès developed a passion for the art of magic .

After returning to Paris in 1885, Méliès joined his father's company as a machine overseer. He developed technical skills, which he refined in addition to his work in replicating some of the automatons of the magician Jean Eugène Robert-Houdin . Méliès also began practicing magic tricks at this time and made her first appearances at the Musée Grévin and the Galerie Vivienne. In 1885, Georges Méliès and Eugénie Genin († 1913) married. His father retired from work in the manufactory in 1888. Méliès now sold part of the possible inheritance to the two older brothers. From the proceeds he bought the Théâtre Robert-Houdin .

Business at the theater was difficult, especially at the beginning: Méliès made no profit until 1898. The program consisted of magic shows, short holidays , pantomimes and a demonstration of some automatons that Méliès had purchased together with the theater. Well-known magicians of the time also appeared in the performances, including Buatier de Kolta , the dwarf La Fée Mab, Duppery and Legris. The permanent ensemble also included Jeanne d'Alcy , who later played in many of Méliès' films and whom he married in second marriage.

The Lumière brothers had rented a studio above the theater. On December 28, 1895, Méliès saw one of the first demonstrations of the cinematograph . The Lumière brothers refused to sell the device to Méliès on the grounds that the economic success of this invention was unclear and that their own exploitation should continue as long as the public was interested. Méliès then traveled to England, where he bought a projector from Robert William Paul , some Edison films and unexposed negatives . On April 4, 1896, Méliès reopened his Théâtre Robert-Houdin as a cinema. He soon bought another projector and converted Paul's into a camera. Together with business partners Lucien Reulos and Lucien Korsten, Méliès patented a Méliès Reulos Kinétograph in September 1896.

In the summer of 1896, Méliès made his first film entitled Une partie de cartes , which was very similar to a Lumières film of the same name. He then first filmed short recordings of everyday scenes, but soon added staged scenes, the so-called scènes composées , to his repertoire . He not only showed his films in the Théâtre Robert-Houdin , but also sold them to fairground artists who showed them along with other attractions.

Méliès set up France's first film studio in 1896 - one of the first in the world alongside Edison's Black Maria - on his family's property in Montreuil, near Paris. The studio opened in early 1897. From now on, almost all of his films were made here. The studio resembled the Théâtre Robert-Houdin in its dimensions, and like its stage, his was equipped with trap doors and other mechanisms to create stage illusions. The walls and the roof were made of glass like a photo studio to ensure adequate lighting of the stage. Movable blinds made it possible to influence the incidence of light. In 1905 Méliès expanded the film studio.

Grave of Georges Méliès in the Père Lachaise cemetery in Paris

In 1897 Méliès founded the Star Film production company , with which he made over 500 films by 1913. At the beginning he was economically relatively successful with them, but soon he was threatened by the competition and black copiers . In order to better distribute its films in America and protect its rights, Star Film opened an office in New York in 1903 , which was headed by Méliès' brother Gaston Méliès . In France he grew up a strong competitor, especially with the production company Pathé . When their distribution system prevailed in 1909, in which the films were no longer sold but rented out, Méliès' expensively produced films were no longer economically up to the cheap, fast, industrially produced films. From 1911 he was only able to produce his own films on behalf of Pathé, and in 1913 his film production came to a standstill.

During the First World War Méliès appeared as a variety artist ; however, he lost all of his fortune. In his second marriage, Georges Méliès married Jeanne d'Alcy (Fanny Manieux alias Charlotte Faës) in 1925 . With his wife he ran a toy shop in the Montparnasse metro station until 1932 . As a filmmaker he was forgotten at that time until 1929 some of his works appeared and film journalists reported about him again. From 1932 other filmmakers made it possible for him and his wife to stay in a retirement home in Orly . His grave is in the Père Lachaise cemetery in Paris . 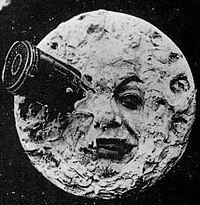 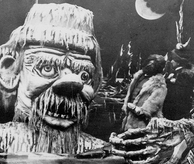 The work of Georges Méliès is characterized by great diversity, imagination and technical skill. Of the large number of his films that he made between 1896 and 1913, around 200 have survived. The films come from different genres . His most famous film is probably Le Voyage dans la Lune (The Journey to the Moon) , with which he created the first science fiction film in 1902 based on the novel by Jules Verne . In addition to these féeries , there were also short documentaries similar to those of the Lumière brothers, re- enacted events from contemporary history and short cartoons.

Méliès is usually credited with inventing the stopping trick . The fact that he discovered this while filming during a recording on the Place de l'Opera and his camera faltered must probably be regarded as a legend. With the help of the stop trick, he made many films that are reminiscent of magic tricks like those shown in the Théâtre Robert-Houdin . In addition to this, he also used other cinematic tricks such as double exposures and model shots .

So-called topical films , in which he recreated events in contemporary history, play an important role in his work . Among other things, he filmed a twelve-part series about the Dreyfus Affair ( L'Affaire Dreyfus , 1899) and staged the coronation of Edward VII in 1902 before it even took place.

Because Méliès had massive financial problems and could not find funding for his film projects, he had to sell 1200 films as raw material to the shoe industry after 1923 following the bankruptcy.

It is difficult to determine the film-historical position of Méliès 'works: Classically, the film history of Méliès' staged pieces differs from the documentary works of Lumières and sees this as the most important contrast in early film. However, this distinction is no longer so sharply drawn today, as Méliès also mainly filmed documentary at the beginning and the Lumière brothers also staged short scenes. Another distinction is often made between the primitive early films, such as those by Méliès, and the later elaborate cinema based on DW Griffith . Méliès' films are examples of a primitive cinema that was not yet familiar with cinematic language with cuts and various recording sizes. This distinction, too, has often been rejected in the last few years and instead demanded not to examine early cinema in terms of the later narrative ( narrative ), but rather to regard it as a cinema of attractions that followed its own aesthetic rules.

Some excerpts from the films Le voyage dans la lune , Le voyage à travers l'impossible and L'éclipse du soleil en pleine lune are included in the music video for Heaven for Everyone by Queen from 1995. The video by The Smashing Pumpkins for their title Tonight, Tonight (1995) was designed in the style of these Méliès films.