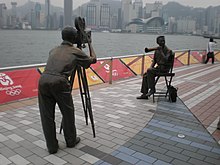 Director and cameraman. Sculpture on the Avenue of Stars in Hong Kong

A film director is the artistic and creative director of a film production ( director , outdated also game master ) in contrast to the film producer ("producer", English: producer), who administratively manages the production.

In the case of small productions, the activities range from the development of the material to the preparation of scripts , the planning of the production, including costs, through to post-production . In professional production contexts, the director's core task is the staging , that is, the resolution of the scenes in a script into individual camera positions and the guidance of the actors.

The term “directing” is clearly defined in cinema / feature films . In television it can mean many things: from the studio director , the sequence director to the image director (camera) to the film director of the same director, especially in the fictional area ( television play , also in the form of series and series , TV movie etc.).

The film director is considered to be the main author of a film work, who shapes it personally and creatively using and editing existing works (e.g. by the scriptwriter and the film composer ) and in cooperation with other co-authors (e.g. image designer and film editor ).

The term is derived from the French régisseur "administrator". In French, however, a director is referred to as a réalisateur (literally “realizer”). During the term of the director in French, the manager , so the management is called.

In the 1910s and 1920s, prominent US film directors such as David W. Griffith , Charlie Chaplin , Rex Ingram , Cecil B. DeMille , King Vidor and Erich von Stroheim enjoyed great freedom of choice and power in directing films. Their popularity and advertising effectiveness partly outshone that of the actors used in the films.

From the mid-1920s onwards, the producers of the studio system regained the economic and, to a large extent, artistic control over film-making that they had had in the early days of film. Film directors became dependent on producer decisions and were often only used as coordinators and executive game masters. In order to preserve their artistic freedom, some directors decided to set up their own production companies; such as Frank Capra , George Stevens and William Wyler with their joint company Liberty Films . Directors such as Robert Aldrich , Otto Preminger , Samuel Fuller and Sam Peckinpah also acted as "producer directors" at times. Later filmmakers such as Robert Altman , Sydney Pollack , George Lucas and Steven Spielberg tried to secure control of their films in this way.

In Europe, the conflict between financial producers and artistic directors was not as strong as in the USA. The problem of bringing economy and aspiration together was often solved in a rather cooperative manner, but the directors were often restricted in their artistic freedom. The auteur theory began in the 1940s and intensified at the time of the Nouvelle Vague , between the realisateur, the talented but constrained "craftsman", and the auteur, who sees his work as an individual, artistically free processing of his own worldview distinguish. This understanding of the film director as a holistic artist, who also has to admit weaknesses and mistakes in his work in order to allow him to act freely, was adopted by the directors of New German Films .

Film directors guide a number of employees during production:

The training to become a director is not standardized. An undergraduate degree in directing is offered at state and private film schools. In the mostly multi-level entrance examination, a film-specific artistic ability and often initial practical experience in film productions must be proven. The formal requirement usually includes the general university entrance qualification or at least the technical college entrance qualification .

An alternative to studying and still more common today is the direct practical acquisition of the necessary knowledge and skills by working as an intern or assistant director in a film production .

The prerequisite for directing is a combination of many different skills. The ability to motivate, guide and coordinate artistic and technical employees is just as important as combining dramaturgical , acting , linguistic, musical and visual elements into a film. Directors must have psychology and knowledge of human nature in order to resolve any conflicts that may arise within the entire team.