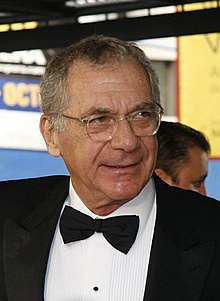 Pollack's parents, the pharmacist David Pollack and the pianist and singer Rebecca Pollack, b. Miller, were Russian Jewish immigrants who met at Purdue University . Sydney Pollack's parents divorced when he was little; Rebecca Pollack had mental health problems and drank. She died when Pollack was 16 years old. David Pollack hoped Sydney Pollack would become a dentist, but he was interested in the film industry. He grew up in Brooklyn and served in the US Army for two years ; he later took acting lessons at the prestigious New York Neighborhood Playhouse School of the Theater at Sanford Meisner , initially as an acting student for two years. After that he was Meisner's assistant for five years. He then worked as a stage and television actor in the early 1960s. He later became a professor at New York University and a television director. He has produced a total of 40 films.

He made his screen debut as a film actor in 1962 with the war film Behind Enemy Lines , in which Robert Redford also made his debut. They have been friends since then, and Redford has starred in many Pollack films after Pollack went behind the camera. In addition to John Frankenheimer , who suggested he switch to directing, Pollack is one of the filmmakers who pushed from television to the cinema in the early 1960s and brought a breath of fresh air there , as well as Franklin J. Schaffner , George Roy Hill and Martin Ritt . In 1965 he made his debut as a cinema director with the psychodrama Voice on the Telephone , another 19 feature film productions followed. In 1985 he reached the height of his work with the love drama Out of Africa, which received a total of seven Oscars . In 1973, Sydney Pollack was a member of the jury at the Cannes Film Festival and in 1986 President of the jury.

Pollack was considered one of the most intelligent directors and was especially popular with actors. He devoted himself to various genres; He shot westerns ( Jeremiah Johnson ) as well as literary adaptations (Out of Africa) , political thrillers ( The Three Days of Condor ) , melodramas ( Encounter of Fate ) and comedies ( Tootsie ) . Pollack was one of the most successful representatives of the conservative Hollywood aesthetic, who, despite the conventional imagery, shaped every film with his own style and also showed moral commitment. He himself said laconically: “It is not impossible to make mainstream films which are really good.” The documentary Sketches of Frank Gehry from 2005, on which he also worked as a cameraman, was his last directorial work. In addition to Gehry's buildings, the film also partly documents the 40-year friendship with Frank Gehry . Pollack has been nominated three times for an Oscar ; In 1986 he received the Oscar for best director for Out of Africa .

His films are usually tragic love stories. They prefer a dramaturgical circular structure, in the course of which the hero has to deal with a fundamentally hostile social environment on the way to self-knowledge. An example of this circular structure is the early work This Property is Condemned , in which the protagonist, after a long flashback, not only symbolically returns to the railroad tracks that run past the place at the end. In Jeremiah Johnson , the trapper played by Redford is confronted in the second half of the film with the events of the beginning. Other examples of tragic love stories can be found in The Way We Were , in which the relationship between the Jewish Marxist and student Katie Morosky ( Barbra Streisand ) and the handsome student from the wealthy Hubbell Gardner (Redford) does not work, Havana , Out of Africa or also Three Days of the Condor , in which the brief encounter between CIA employee Joseph “Condor” Turner (Redford), who took the photographer Kathy Hale (Faye Dunaway) hostage on his escape from the secret service, remains an intense snapshot .

Pollack had been married to actress Claire Griswold since 1958, with whom he had three children. On May 26, 2008, Sydney Pollack died of stomach cancer that had been diagnosed nine months earlier.