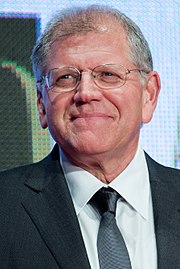 Robert Lee Zemeckis [ ziːˈmekɪs ] (born May 14, 1952 in Chicago , Illinois ) is an American director and film producer . His directorial work on Forrest Gump won an Oscar in 1995 , but he has also received numerous awards for his film trilogy Back to the Future .

Zemeckis was born in Chicago to a Lithuanian -American father and an Italian-American mother and grew up in a Catholic working-class family.

Zemeckis loved film and television even as a child and was enthusiastic about his father's 8mm film camera . After he had already filmed family celebrations and holiday experiences with it, he began making small documentaries with friends, in which he also tried to incorporate special effects. The film Bonnie and Clyde fascinated him so much that he decided to go to film school.

According to his own statements, Zemeckis sacrificed a lot of life just to make a career in the film business. “I won an Academy Award when I was 44, but I paid for it with my 20s lifetime. This decade of my life from film school to 30 was nothing but work, nothing but absolute, driven work. I had no money and no life. "

Politically, Zemeckis was repeatedly active as an election campaign sponsor for the Democratic Party .

His adventure comedy On the Hunt for the Green Diamond was Zemeckis' first major success, which enabled him to realize the 1985, also very successful film classic Back to the Future , for which he also wrote the script with Bob Gale and which he wrote in 1989/90 two sequels to the trilogy followed. In 1995, Zemeckis won an Oscar for Best Director in Forrest Gump, starring Tom Hanks . He also directed Wrong Play with Roger Rabbit , Contact, and Cast Away (again with Hanks).

Zemeckis 'film Der Polarexpress was made completely computer-animated by motion capture and represents the third collaboration with Tom Hanks. After The Legend of Beowulf, Charles Dickens ' Disney's A Christmas Story also comes from pure computer work with the same technology. In this Jim Carrey acted as a human role model for the artificially generated computer figure.

Since On the hunt for the green diamond , Robert Zemeckis' directorial work has been shaped by the film music by composer Alan Silvestri (exception: Three Paths to Death ). In 2012 he shot the documentaries Bound by Flesh with his wife Leslie Zemeckis about the Siamese twins Daisy and Violet Hilton .