The title of this article is ambiguous. For directing in construction see directing services . 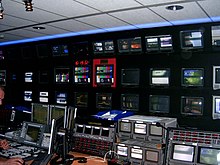 Director of the private broadcaster RTL, here at the broadcast of "Punkt 12"

Regie ( French régie "responsible management"; Latin regere "govern") originally referred to an indirect tax in the economic system of feudalism . In the artistic field, the term was probably used for the first time in the Mannheim theater protocols of 1785, but there it referred to the stage manager's activity . In today's parlance, directing means the responsible artistic direction of a performance or program by a director in the performing arts , i.e. in theater , opera , film , radio and television . This includes work interpretation ( reading ) and the artistic, organizational and administrative management of the rehearsal and display of a work by performing artists ( presentation , movie or broadcast). However, “stage directions” are not the instructions of the director, but those of the author in the text or script.

The forms and working methods of theater direction can be very different. They depend to a large extent on the organizational form of the respective theater (institutional state or city theater, independent group, etc.) and range from the sole artistic responsibility of the director to collective forms of work in which everyone involved takes on the tasks of directing.

Theater direction in today's understanding has only been practiced since the end of the 19th century. Before the theater had no such interpretative and creative function. The director's job only concerned the organization of the external processes of a performance. Although there were already in the Greek Theater , the Choregen that perform particular tasks took over the organization and rehearsals, but an artistically creative role they did not play. The poets themselves rehearsed the plays. In the German-speaking world, the designation of director as a description of an activity at the large court and national theaters was first recorded in the last third of the 18th century. The directors of that time were all older actors who took on organizational and administrative tasks in addition to their stage work. The action on the stage, however, was determined by the actors themselves, whose professionalism included embodying a role effectively.

Stage technology developed rapidly in the 19th century; the needs of the audience for a convincing illusion in the theater were met by sophisticated stage brochures (for example at the Meininger family ) and increasingly sophisticated stage lighting. At the same time, the style of acting changed. With the rise of realism and naturalism , there was a tendency towards a lifelike, truthful representation of the characters by the actors. Bundling these complex tasks and driving them forward with inspiration was henceforth the task of the theater director. An understanding of theater direction emerged in the sense of the authorship of a production that bears the handwriting of the director and achieves a certain autonomy compared to the literary model. Directors who helped establish this image were, for example, Otto Brahm and Max Reinhardt . Max Reinhardt's staging of this play became a symbol for the creative power of the direction, which turns a well-known play like Shakespeare's A Midsummer Night's Dream into an experience never seen in this way. “The Midsummer Night's Dream was a starting point because it was here that Reinhardt had completely realized his idea of ​​festive, splendid, light and playful theater for the first time, tried out his means and recognized himself as its master. It was epoch-making: Reinhardt operated and manifested the emancipation of the director here. The controller of the playing process became its creator. ”Around 1900, numerous theorists advocated liberating the theater completely from its ties to drama (such as Edward Gordon Craig and Adolphe Appia ) and creating an autonomous theatrical work of art that managed without a literary author and alone is the work of the director.

Ultimately, the development of theater in Europe was different, but the recognition that the staging is a self-creative, autonomous performance of the director - and not just a subordinate interpretation of the literary work - has become generally accepted. In this respect, the term “directorial theater ” , which is often used pejoratively, is a pleonasm , because today (at least in European institutionalized theater) a staging is no longer conceivable without the integrative work of a director. However, there is no legal regulation in Germany that confirms that the director has a copyright in his productions. The director’s freedom in relation to the literary source is also a hotly controversial issue, as the Brecht heirs showed when Frank Castorf’s production of Baal at the Munich Residenztheater was banned.

For the opera , it was the composer and conductor Gustav Mahler who, as first conductor and director of the Vienna Court Opera, made a decisive breakthrough to modern direction between 1900 and 1907. In collaboration with the scenographer Alfred Roller , Mahler enforced the unity of content between musical and scenic design in reference to Richard Wagner's idea of ​​the total work of art .

In the institutional theater today, the direction is the decisive artistic force in developing a production. The director works closely with everyone involved, but ultimately makes the most important decisions. All processes come together in his hand. In addition to imagination and creativity, technical understanding, organizational talent and, above all, assertiveness are important characteristics of a theater director.

The directorial work process is not uniform and its sequence is strictly defined; it depends to a large extent on the working techniques and habits of the artists involved. Nevertheless, certain sections of the production process can be described that apply to almost all directorial work. The first step in developing a staging is the content and organizational preparation of the rehearsal process. This includes research on the play or the topic of the production, which is usually carried out in collaboration with the dramaturge . Often the dramaturge creates a line version of the piece, which is coordinated with the director and already sets certain conceptual accents. At German state and city theaters, the cast of the play ensemble is also prepared by the dramaturge and coordinated with the respective artistic director of the theater.

Furthermore, the preparation includes the discussion with those responsible for the stage and costume design, who work closely with the director and develop a stage design or figurines for the costumes. In the opera, one of the preparatory work is the coordination of content and interpretative goals with the conductor of the performance. A rehearsal plan is then usually created that structures the rehearsal process up to the premiere .

The rehearsal work begins with a reading or conceptual rehearsal, in which the director explains his content-related and conceptual intentions to the ensemble. The set designer presents the set - often in the form of a scale model - and the costume designer explains the figurines. As a rule, the entire piece is then read by the ensemble.

During the rehearsals, the director works with the actors or singers to develop scenic solutions for the staging step by step. The director's task is to turn all artistic participants into creative partners. As a rule, the director makes suggestions regarding the concrete implementation of a scene. However, there are also directors who do not or only very sparingly at first, in order to encourage the actors / singers to be creative and responsible. They do not pretend, but evaluate the actors' suggestions and offers and select those that are most fruitful for the conceptual intentions. The idea that theater directing is a kind of dressage act in which the actors / singers have no say is clearly a thing of the past. Creating a fertile atmosphere and organizing the interplay of the individual abilities of the actors / singers in such a way that no unproductive conflicts arise requires empathy and psychological skill from the director.

Initially, the rehearsals usually take place in a marked decoration on a rehearsal stage.

In the opera these rehearsals are only accompanied by the piano; the orchestra rehearses separately. Later you switch to the actual stage. Here, after some time, partial processes and finally complete runs of the entire staging are rehearsed in order to determine the rhythm, possibly to tighten scenes and to check the narrative flow for logic and stringency. An important discussion partner for the director at these rehearsals is the dramaturge, who should give the director the most objective feedback possible with his description of the rehearsal results.

The final rehearsal process begins with the technical equipment, in which the original stage design is set up, followed by the lighting rehearsals, on which all lighting "moods" are worked out. This is followed by the main rehearsals (in opera: orchestral main rehearsals), in which the actors, sets, costumes, masks, light, sound, special effects, etc. are rehearsed in their interaction. The director Peter Zadek describes that the most difficult part of the final rehearsals is “to maintain the staging and not let the technology destroy it.” This coordination of the technical and artistic processes is one of the most vulnerable moments in the rehearsal process - not least because the final samples are strictly defined in their sequence and there is little time for major corrections if it turns out that something is not working. The actors / singers are often initially unsettled by the addition of the technical apparatus. Even sample results that have been fixed for a long time can suddenly deteriorate. Here it is the director's task to have a psychologically stabilizing effect and to keep the solution of technical problems as far away as possible from the performing artists. As a rule, the dress rehearsal should run like a performance, i.e. without any interruptions by the director. The work process is completed with the premiere. The artistic supervision of the performances is usually carried out by an assistant director or an evening director.

Direction stands for responsible management ("on your own", i.e. independent ), administration and management. In film and television , technology is more important in directing than in theater .

Training or studies in directing is offered at state film and theater schools as well as at private institutions. An entrance exam, sometimes lasting several days, is the norm. Learning the necessary skills through internships, assistant directorships or volunteer work is common and is sometimes one of the entry requirements for admission to the relevant universities. Theater or film direction can u. a. be studied at the following institutions: