A director (from French régisseur , régir ' to lead'), also known as the game director , directs and is traditionally the decisive person alongside the actor in the performance of works of the performing arts . As an alternative to the central authority of the director, various approaches of (more or less) equal directing teams have been developed.

There is the stage director for theater , musical , opera , operetta and other stage works, the film director for the art of film , the radio play director for radio plays and artistic features , the television director for television programs and the dialogue director for the synchronization of films and television series, who supports the individual Voice actor coordinated. The director of a dance - for example in classical , expressive or contemporary dance - is called a choreographer . What these different directing activities have in common is the responsibility for the artistic design of a project, which is usually based on a written template. 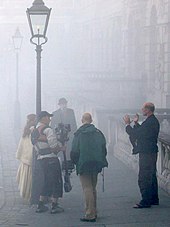 A film director (right) gives final instructions before the next shot

Activity of the director

The staging of a director represents an independent artistic work. He owns a considerable share of the copyright in the resulting work. As a rule, the general or even the exclusive right of use has been assigned to the theater or the producer in advance through contractual agreements . Den: In the film, the director several co-author shall cameraman (the true in English as a director of photography , ie as cinematographer is called), the film editor , and the creator of pre-existing works, such as screenwriter and film composer . The director's tasks include interpreting a script, a play, a musical theater work or a production manuscript (radio play, feature). Often - in consultation with the author and the dramaturge - he has a decisive role in the development or revision of a play.

The adaptation of the artistic draft to the economic and organizational possibilities is carried out by the director in cooperation with the producer (see theater producer or film producer ) or the theater management as well as other responsible persons. In addition, the director (film), in consultation with the casting office, selects the actors and sometimes the technical-artistic staff. In the theater sector, especially in subsidized theaters with a permanent ensemble, the participation of the director in casting the roles, especially in smaller and medium-sized theaters, is limited and is primarily the responsibility of the artistic direction of the respective theater.

When implementing the project, the tasks of a director differ depending on the medium. Regardless of this, one of the director's central tasks is to guide and support the actors in developing their characters.

Theater directors are usually freelance. Exceptions are senior stage directors and drama directors as well as in-house directors who work on a permanent basis at a theater. On average, directors stage 3–5 plays per season (a production takes around 6–8 weeks). The fee is freely negotiable; it is based on the experience, the successes to be demonstrated and the image of the director, which together make up his “market value”. Less successful directors receive correspondingly fewer staging offers and lower fees.

The prerequisite for directing is a combination of many different skills. The ability to motivate, manage and coordinate artistic and technical employees is just as important as combining dramaturgical , acting, linguistic, musical and visual elements into a film or a theater / opera evening. Experience as an assistant, performer or in a specialist profession are just as helpful as the possibility of frequent theater visits and knowledge of the stage repertoire and new pieces. Subject-specific training is not required.

- Alan A. Armer : Textbook of film and television directing

The training course is not uniformly regulated; Film directing can be studied at various film schools in Germany . Theater directors are trained at comparable institutes (for example at the "Ernst Busch" Academy of Dramatic Arts in Berlin , at the Academy for Performing Arts Baden-Württemberg and the University for Music and Performing Arts Frankfurt am Main ). The entry requirements differ from university to university; an entrance examination is usually required. At many universities, there is a minimum age between 17 and 21 years. Previous practical experience, for example as an intern or assistant director, is usually desirable and increases the chances of acceptance.

The role of the director today is not so much to simply "implement" a piece as a stage setting, but rather to work out his own (necessarily subjective) interpretation and to give the production an unmistakable aesthetic character. On the one hand this is an expression of the emancipation of this profession from mere replenishment, on the other hand it harbors the danger of an addiction to originality. In order to remain interesting under the laws of the market, some directors are now cultivating their directorial style into a trademark that should be recognizable at first glance. This gave rise to the sometimes bitter debate about the so-called “director's theater ”.