This article is about the cameraman profession. For the film The Cameraman, see Buster Keaton, the film reporter ; for the magazine see Film & TV Kameramann .

Camerawoman at a rock concert

The cameraman ( plural : cameramen or cameramen ) or cinematographer is responsible for the camera work or art work in the production of films broadcasts, such as feature films and documentaries, TV movies / series /, live recordings or electronic reporting .

Unlike in English, the term cameraman has not linguistically represented the differentiation of tasks in this cinematic trade over the past decades. In the field of fictional film, the word cameraman is colloquially used today to describe the cameraman who creates images. In English one uses the term Director of Photography (“director of photography”, “picture director”), whose task is the entire light and image atmosphere design of the film including the decision on setting sizes. The term cinematographer is also used for this task.

A distinction is made between the Cameraman in English , comparable to the "picture reporter" in current reports or in sports broadcasts, and the Operating Cameraman as an executive camera pan who operates the camera , and the Assistant Cameraman for various assistant professions such as the focus puller as a focus puller .

The German term cameraman or camera woman includes different professions, which can be defined as follows:

The job description can vary greatly depending on the field of application.

In the case of television recordings, a distinction is made between studio or live cameras or EB cameras. The studio or live cameraman is part of a recording team and pans the camera, while the EB cameraman acts largely independently and mostly works in the news area. In film productions, artistic and photographic aspects are in the foreground: the film cameraman deals with the selection of motifs and settings and works with the director to develop the overall visual and dramaturgical concept of the film and implement it photographically.

This article deals largely with the profession of the cameraman in the context of cinematography.

In the early days of cinema , the film photographer and the camera operator were the sole operators of the film camera . Since the functions and possibilities of the cinema camera have become more and more complex in the course of technical development, the motion picture photographer has increasingly been replaced by a whole camera team in which differently specialized people perceive different functions.

Colloquially, the cameraman is often equated with the boss of the camera team. The current term "camera" says nothing about the profession of a lighting cameraman (in Great Britain Lighting cameraman and in the USA cinematographer ), i.e. the person who is responsible for film photography.

The image-creating cameraman is called director of photography (DoP, DP) in American and British English , directeur de la photo in French, direttore della fotografia or autore della fotografia in Italian and director de fotografía in Spanish , which could be translated as photographic director . The terms Bildgestalter and Bildautor are increasingly used in German.

In the US, it will follow the hierarchy of the cameraman ( "Swivel", Eng. And camera operator ), the first assistant camera ( focus puller ), which is responsible for the sharpness and the second assistant camera ( clapper loader ) or clapper loader, which the Operates the clapperboard, handles the raw film material, gives the actors lines and positions if necessary and takes care of all the paperwork for the camera team. In a broader sense, the camera team includes still photographers who are responsible for the advertising images ( stills ), and the workers of the camera stage , who u. a. operate the dolly or crane ( grip , key grip , dolly grip ). In larger film productions, companies also use a second camera team ( second unit ) that takes on less important recordings (e.g. in which the main actors do not appear), relieves the production budget and enables parallel work.

The cameraman has to assess the necessary equipment and material in the pre-production phase and usually put together the team. In the case of feature film recordings , he is responsible for the image composition (perspective, frame ), camera work and the lighting of the set . After filming has finished, he often has to prepare the next set.

Prior to the shooting, the cameraman developed based on the screenplay with the director ideas for the visualization of the script. In one extreme, he takes over 100% of the visual implementation of the material, in the other extreme he “only” takes care of the implementation of the ideas of others. In the so-called “Polish School” he is already involved in the scriptwriting process. In the so-called dogma film , the cameraman is completely free to visualize and is thrown into the situation almost unprepared. Every good cameraman has developed his own style, but is also able to implement different styles. A cameraman is usually chosen for a film production because he has a good command of the targeted style of the film. In this respect, the cameraman, as the visual author of the film images, is also a co-author of the film. 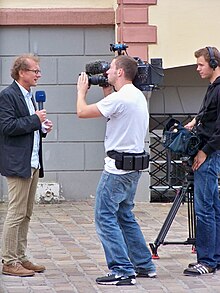 The work and the associated demands on cameramen working for television can be divided into two different fields of activity.

EB cameramen mainly work in a "three-man team" and implement the editor's story largely independently based on visual aspects. The area of ​​responsibility is varied and can range from a 20-second short message to a 45-minute documentary.

The relatively new job description of the video journalist is highly controversial, as a “one-man team” is supposed to replace the EB team.

E-cameramen work in the so-called composite camera system (studio or live) and receive their instructions from the director via intercom . In the case of recordings or live broadcasts with several cameras, the director drafts a concept in advance, which however often cannot be implemented 1: 1 in live productions. In contrast to feature film or commercial productions, there is often not enough time to discuss each individual motif with cameramen and film editors . Rather, cameramen and editors work comparatively independently here.

The training to become a cameraman is not standardized. Either a photographic training with additional training at a film academy or television academy or an initial training at an art college or university of applied sciences is possible . It is important to gain practical experience while studying.

In addition to the training of Master of Arts (MA) or Master students there are also artistic master classes . A possible further development is the video journalist's job description .

Although there has been an Oscar of its own in the “Camera” category for many years , the profession has always received little attention in the shadow of the attention paid to actors or film directors. BAFTA awards for the best camera have existed since 1964 and are presented in various film categories. Emmy Awards for Outstanding Cinematography are also presented in various film categories. The German Camera Prize has only been a special award in Germany since 1982. The American Society of Cinematographers has been presenting the ASC Award for the best cinematography in a feature film since 1987 and the ASC Lifetime Achievement Award for a life's work since 1988 . The Camerimage Festival has been held annually in Poland since 1993 and is the only film festival in the world that explicitly focuses on camera work. In addition, there has been an international award since 2000, the Marburg Camera Prize , which is awarded jointly by the city of Marburg , the local cinema companies and the Department of Media Studies at Philipps University .