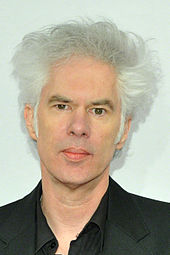 Jim Jarmusch grew up as a second child with his siblings Ann and Tom in a not very diverse middle class suburb of Akron , Ohio . His father was an executive at the BF Goodrich Company tire company , a hard-working businessman, according to Jarmusch. His family has European ancestry: the father came from a family of Bohemian- German immigrants, and his mother had Irish-German parents. Before they got married, his mother wrote film reviews and was a reporter for entertainment events and more for the local daily Akron Beacon Journal . To keep her calm, she often sent Jim to the movies as a child, where he watched B-movies with growing enthusiasm .

Already at the age of 14 Jarmusch became interested in the counterculture , for example in books by the beatniks William S. Burroughs and Jack Kerouac or records by the Mothers of Invention , which he stole from their older siblings together with friends. Using forged IDs, he and friends went to a weekend movie theater that showed underground films such as Andy Warhol's The Chelsea Girls and Robert Downey's Putney Swope . One of his grandmothers is said to have encouraged him to read sophisticated literature and to have given him Proust's novel cycle In Search of Lost Time for his 16th birthday . Jarmusch later published poetry himself .

After graduating from high school in 1972 he went to Chicago at age 19 and enrolled at the School of Journalism of Northwestern University one. The following year he moved to Columbia University in New York , where he studied English and American literature . There he mainly attended lectures on modern American poetry such as the beatniks and the poets of the subversive New York School . He also wrote for the university literary magazine The Columbia Review . In 1975, in his final semester, he first went to Paris for ten months . He worked as a delivery driver for an art gallery and spent a lot of time in the cinema and in the archives of the Cinémathèque française . There he discovered European and Japanese cinema, among other things. After returning to New York in 1976, he graduated with a Bachelor of Arts . His literature at that time became more cinematic, that is, pictorially descriptive: “ My writing was becoming more cinematic in certain ways, more visually descriptive ”.

He then studied film studies at the prestigious Tisch School of the Arts at New York University . He learned to direct with Nicholas Ray, among others . In the late 1970s he joined the post-punk scene in the East Village and tried his hand at keyboardist, singer and lyricist for the no-wave group The Del-Byzanteens .

In 1980 he shot his graduation and first film, Permanent Vacation , which premiered at the Mannheim Film Week and was awarded a prize. Then he became production assistant to Wim Wenders , who gave him the remaining film roles. With this material and a budget of $ 7,000, he made the 30-minute short film The New World , the forerunner of Stranger than Paradise , in 1982 . The German producer Otto Grokenberger saw the film at the Salsomaggiore film festival in Italy and gave Jarmusch USD 110,000 so that he could create a full version.

When the directors Sam Fuller and John Boorman pointed out his resemblance to the actor Lee Marvin , he founded the exclusive and self-deprecating circle " Sons of Lee Marvin ", whose only inclusion criterion was a certain resemblance to Marvin. Members include his friends Nick Cave , Tom Waits and John Lurie .

Jarmusch has been in a relationship with filmmaker and actress Sara Driver since the early 1980s . 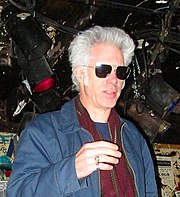 Jarmusch's work revolves again and again about being foreign, the clash of different cultures and the bonding force of family relationships. While one could often suspect a pessimistic, sometimes anti-American undertone behind these conflicted constellations, his films consistently refuse such a valuation.

Jarmusch is one of the few truly independent directors or auteur filmmakers , which means that he retains control over the entire film production and the rights to the negatives of his films. Another specialty is his unorthodox work habits. He writes his plots for very specific actors and then builds a story around this character (s). He consciously renounces the usual means of shooting schedules or storyboards . Like some of his contemporaries ( Paul Thomas Anderson , Quentin Tarantino , John Cassavetes ), Jarmusch distributes some of the roles to members of a tribal ensemble with whom he is friends, such as Iggy Pop , Tom Waits , John Lurie , Roberto Benigni , Isaach de Bankolé , Bill Murray or Tilda Swinton .

Jarmusch's films are carried by slowness and laconic humor. Popular stylistic devices are the black and white film, the targeted and deliberately grotesque use of musical elements and the scenic resolution in plan sequences , mostly master shots .

In addition to his movies, he made music videos for Talking Heads , Tom Waits , Neil Young and Jack White , among others . For Jarmusch, music is “the highest and most beautiful form of expression. Without music, life would have no meaning ”. The soundtracks are an important part of all of his films, he worked with Waits ( Night on Earth ) , John Lurie ( Stranger than Paradise and Down by Law ) and Young ( Dead Man ) , but also used the music of u. a. Sunn O))) , Boris , RZA , Mulatu Astatke , Jozef Van Wissem . In Stranger Than Paradise plays Screamin 'Jay Hawkins ' song I Put a Spell on You an important role and always reappears. In Mystery Train , Elvis Presley's Blue Moon connects the individual episodes that make up the film. He also made two music films - Year of the Horse, on a concert tour by Neil Young & The Crazy Horse, and Gimme Danger, on Iggy Pop & The Stooges .

While still a student in New York, Jarmusch was a member of the no-wave band The Del-Byzanteenes, with whom he recorded the album Lies to Live By . For The Limits of Control he recorded some songs with his band Bad Rabbit . He released three albums as a duo with the Dutch lute player Jozef Van Wissem ( Concerning the Entrance into Eternity (2011), The Mystery of Heaven (2012), An Attempt to Draw Aside the Veil (2019)). Van Wissem also played most of the soundtrack for Only Lovers Left Alive , in which Jarmusch's band SQÜRL , a sequel to Bad Rabbit, was involved. SQÜRL also recorded the soundtrack for Paterson .