This article is about actor Bill Murray. For other individuals, see William Murray . For the American singer, see Billy Murray . 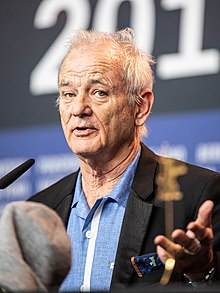 Bill Murray at the Berlinale 2018

William James "Bill" Murray (born September 21, 1950 in Wilmette , Illinois ) is an American actor , director , comedian and producer . Murray became known to a wide audience through a number of successful film comedies in the 1980s, with his work with director Ivan Reitman standing out. From the 1990s on, Murray expanded his repertoire to include tragicomic and serious roles, for which he was increasingly recognized by film critics .

Bill Murray was born in a suburb of Chicago as the fourth of nine children and grew up in a simple family. His parents were of Irish descent. Murray was raised a Roman Catholic . He started working as a golf caddy with his brother Brian at an early age in order to be able to pay for his education. As a teenager he played in a rock band and in high school he was part of a theater company. During his time at the College , he earned his living as a dealer with marijuana . On his 20th birthday, he was arrested for this and given a suspended sentence.

Murray began studying medicine at the Roman Catholic Regis University in Denver , Colorado , but soon dropped out and returned to Illinois . In 2007 Regis University awarded him an honorary doctorate .

With Miguel Ferrer and Bill Mumy he formed the band The Jenerators .

In the mid-1970s, Murray dropped out of medical school and joined improvisational theater Second City, where he was tutored by acting teacher Del Close . Murray was part of the cast of the 1975-1976 television show Saturday Night Live with Howard Cosell . From 1977 he was an integral part of the writing and acting team of the legendary TV show Saturday Night Live and received his first Emmy .

In 1976 Murray made his feature film debut in Paul Mazursky's A Hair in the Soup in a minor supporting role, but without crediting it. 1979 began the collaboration with Ivan Reitman with the lead role in his film Baby Bacon and Meatballs . It was Reitman too, the Murray with the comedies I think a moose smooches me! and Ghostbusters - The Ghostbusters Breakthrough. Murray had further successes with Caddyshack , Tootsie and the Dickens adaptation, The Spirits I Called . Another Reitman film followed in 1989 with Ghostbusters II .

In 1993, Murray starred in And Daily Groundhog Greetings a reporter who sees the same day over and over again. The film is now considered a classic, but it also marked the end of the collaboration with screenwriter Harold Ramis , with whom Murray only reconciled years later, shortly before Ramis' death. After a slight lull in the mid-1990s, he made a comeback in 1999 with the socially critical comedy Rushmore , his first film with Wes Anderson . Since then he has been a member of Anderson's permanent cast. Although Murray's role in Rushmore was comic again, he won a total of seven awards, including the Los Angeles Film Critics Association award.

His second collaboration with Anderson, the tragicomedy The Royal Tenenbaums in 2001, was also quite successful . A high point of his career was Lost in Translation (2003) by Sofia Coppola . For this role he received a. a. a Golden Globe and an Oscar nomination. Another Anderson film followed in 2004 with the commercial flop Die Tiefseetaucher . This was followed in 2005 by Jim Jarmusch 's main role in the film Broken Flowers , in which, as a die-hard bachelor, he reluctantly went across the United States in search of the mother of his alleged (19-year-old) son.

In the zombie comedy Zombieland from 2009, which can in part also be interpreted as an homage to the actor, Murray embodies himself.

Together with Jan Vogler , he released the album New Worlds in 2017 , in which he works among other things on classical music. To this end, they have performed a number of performances around the world.

With the remake Ein crazy ingenious coup , Murray delivered his first directorial work in 1990, which he claims will be his last.

Bill Murray has no agent; to get in touch with him, you have to leave a message on an answering machine.

Bill Murray and his brothers have been designing and selling their own golf apparel collection called "William Murray Golf" since 2017 .

His German dubbing voice came mostly from Arne Elsholtz . In earlier films he was also z. B. synchronized by Manfred Lehmann , Manfred Seipold and Sigmar Solbach .