This article is about director Wes Anderson. For the musician see Wes Anderson (musician) . 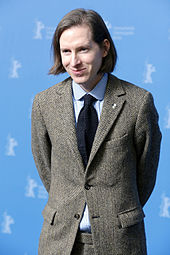 Wesley Wales "Wes" Anderson (born May 1, 1969 in Houston , Texas ) is an American film producer , screenwriter and director of feature films and commercials .

Anderson studied philosophy at the University of Texas at Austin . There he met his future work partner Owen Wilson know. Both wrote the script for the short film Bottle Rocket (1994). This story was turned into a feature film of the same name by Anderson in 1996 . The following two films Rushmore (1998) and The Royal Tenenbaums (2001) also come from the pens of Anderson and Wilson. For the latter film, the two received an Oscar nomination as screenwriters.

The movie Die Tiefseetaucher (2004) was released in German cinemas in 2005 . For the first time, Owen Wilson was not involved in the script. In the same year, Anderson served as the film producer of the successful independent film The Squid and the Whale with Laura Linney and Jeff Daniels in the lead roles. In 2007, Anderson completed his sixth directorial work with Darjeeling Limited . The tragicomic story about three American brothers, played by Owen Wilson, Adrien Brody and Jason Schwartzman , who go on a self-discovery trip to India a. represented in the competition of the 64th Venice Film Festival , but received no award.

In 2009, Anderson presented the film version of the story of the same name by Roald Dahl with The Fantastic Mr. Fox . The film was nominated for an Oscar in the category Best Animated Film the following year.

In 2012 Anderson completed his seventh feature film, Moonrise Kingdom , for which he wrote the script together with Roman Coppola . The story is set on the New England coast in 1965 and tells of two twelve-year-olds (played by Kara Hayward and Jared Gilman ) who fall in love and run into the wilderness, whereupon the community (played by, among others, Edward Norton , Bruce Willis , Bill Murray , Tilda Swinton , Frances McDormand , Harvey Keitel , Jason Schwartzman and Bob Balaban ) takes on the chase. Moonrise Kingdom opened the 65th Cannes International Film Festival in May 2012 .

The shooting of Grand Budapest Hotel , in which Bill Murray and Owen Wilson u. a. and Ralph Fiennes and Jew Law involved were, in January 2013 Görlitz begun. The Art Nouveau department store there served as the backdrop for the hotel that gave the title . For the scenes filmed there, he was inspired by the atmosphere in Ingmar Bergman's drama Das Schweigen , says Anderson. The film premiered on February 6, 2014 as the opening film of the 64th Berlinale and received the Grand Prize of the Berlinale Jury on February 15, 2014 . On January 11, 2015, he received the Golden Globe Award in the Best Film / Musical and Comedy category.

2016 found three of his films ( The Royal Tenenbaums , Moonrise Kingdom , The Grand Budapest Hotel ) in the BBC -Choice of the 100 most important films of the 21st century into account.

In 2018 Anderson opened the 68th Berlin International Film Festival with the animated film Isle of Dogs - Ataris Reise , which is set in a Japan of the future. The film focuses on the twelve-year-old foster son of a corrupt mayor, who is on a journey to a huge garbage dump to which all dogs in the city have been banned by a government decree. Isle of Dogs - Ataris Reise , with u. a. Bryan Cranston , Edward Norton , Liev Schreiber , Bill Murray , Bob Balaban , Jeff Goldblum , Scarlett Johansson , Ken Watanabe , Greta Gerwig , Frances McDormand and Yoko Ono in speaking roles earned him the award for best director at the Berlinale .

Anderson's film The French Dispatch is slated for release in US cinemas on July 24, 2020.