Walter Bruce Willis (born March 19, 1955 in Idar-Oberstein , Germany ) is an American actor , film producer , musician / composer and screenwriter . He had his breakthrough as an actor in 1988 with the box office hit Die Hard . 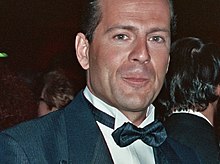 Bruce Willis was born in Idar-Oberstein (Rhineland-Palatinate) in 1955 as the son of the American soldier David Willis and his German wife Marlene from Kaufungen near Kassel . He spent the first two years with his parents in Germany before the family moved to the United States in 1957. Together with his three younger siblings Florence, producers David and Robert, who died in 2001, he grew up in New Jersey . As a therapy against his stuttering , he came to acting while still at school. After graduating from high school , he took acting classes at Montclair State College. In order to be able to finance this, he also worked in a chemical factory. 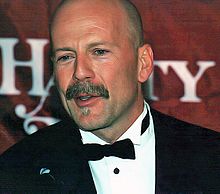 He gained his first experience as an actor in New York theaters and as a performer in commercials . From 1985 he played the leading role in the detective series The Model and the Sniffer (Moonlighting) , which was awarded, among other things, with an Emmy and a Golden Globe . He had a guest role in Miami Vice .

He then worked twice with the director Blake Edwards , before his breakthrough in 1988 with the big- screen hit Die Hard . The role of the policeman John McClane, who only follows his own rules and always has a casual saying on his lips, was tailor-made for Willis and made him the star of the action film . Apart from action films like Die Hard 2 and Last Boy Scout , Willis had little commercial success until the mid-1990s, which was partly due to the fact that he tried his action by roles in comedies like Death Suits Her - Get rid of image . In 1994, the role of boxer Butch in Pulp Fiction was cast by Quentin Tarantino with Willis, whose portrayal received critical acclaim. Other box office hits such as 12 Monkeys , The Fifth Element or Armageddon - The Last Judgment followed . With films like The Sixth Sense or Unbreakable - Unzerbrechlich , he then increasingly devoted himself to dramas .

In October 2006 Bruce Willis was honored with a star on the Hollywood Walk of Fame . According to Forbes Magazine, Willis is one of the highest paid actors in Hollywood . Between June 2007 and June 2008, he received fees totaling 41 million US dollars, ranking sixth behind Will Smith , Johnny Depp , Eddie Murphy , Mike Myers and Leonardo DiCaprio .

Further cinema productions followed, but since 2008 Willis has been increasingly appearing in films that have only limited or no theatrical release at all. In addition, he often only appears as a supporting actor in such productions. Steven C. Miller is a director with whom he worked several times.

Willis also works as a stage actor and producer. He also released two very successful LPs / CDs: The Return of Bruno , which went platinum , and If It Don't Kill You, It Just Makes You Stronger . He reached chart positions with the singles Respect Yourself , the cover of a song by the Staple Singers , and Under the Boardwalk . He still appears sporadically today with his band. In 2010, Willis made a guest appearance in the music video for Stylo , the 2010 single by Gorillaz .

He is co-founder of the Planet Hollywood restaurant chain . In 2007 the city of Idar-Oberstein named Willis, who was born here, as a special ambassador. 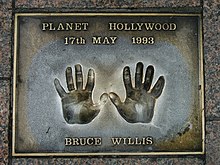 Handprints at Planet Hollywood in London

Bruce Willis has three daughters with the actress Demi Moore , with whom he was married from 1987 to 2000: Rumer (* 1988), Scout LaRue (* 1991) and Tallulah Belle (* 1994). All of the daughters have been in front of the camera themselves, initially in films in which one of the parents also played. Rumer was seen at the side of her father in Hostage ; Scout LaRue and Tallulah Belle first starred in the movie The Scarlet Letter , then in 2001 in Bandits! .

At the Sundance Film Festival in Utah in January 2008, Willis presented himself with his new partner, model Emma Heming . Their wedding took place on March 21, 2009 in the Caicos Islands . Their first daughter was born on April 1, 2012. On May 5, 2014, the couple had another daughter.

Statements on politics and current affairs

In an interview in early 2006, Willis denied the rumor that he was a supporter of the George W. Bush administration . He said he was not a Republican and hates governments: “We cannot influence our politicians. They don't give a damn about us. ”He also justified himself in advocating the war in Iraq :“ I'm not a violent person. But we live in a violent world. This country was built on violence. ”On the occasion of the film Die Hard 4.0 , he said in an interview with the Süddeutsche Zeitung that he is a politically difficult person who thinks differently.

Ronald Nitschke lent him his voice in The Model and the Snoop , Death Suits Her , Blind Date and Four Rooms . In almost all other films he is dubbed by Manfred Lehmann . In Die Hard: Now, for once , he got the voice of Thomas Danneberg , since Lehmann was busy shooting at that time. 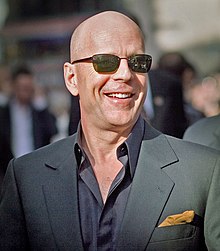