Walk of Fame is a redirect to this article. Further meanings are listed under Walk of Fame (disambiguation) .

Hollywood Walk of Fame in front of the Dolby Theater 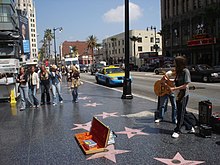 The Walk of Fame is a walkway in Los Angeles . It stretches for 15 blocks on either side of Hollywood Boulevard , from Gower Street in the east to La Brea Avenue in the west. In addition, the Walk of Fame runs three blocks northeast along Vine Street , starting on Sunset Boulevard in the south, crossing Hollywood Boulevard up to Yucca Street . 2,690 stars are currently set in these sections (as of June 5, 2020), with which celebrities are honored who played or still play an important role, especially in the American entertainment industry.

Stars on the Walk of Fame are awarded in five categories with a corresponding symbol. Complete lists of the honorees with the addresses of the stars can be found at the following links:

Each star is made of old pink terrazzo . The name of the artist or group to be honored is embedded in the stone, as well as the symbol in brass for the category in which the honor took place.

Three stars do not belong in any of the above categories: the first star is dedicated to Tom Bradley , longtime mayor of Los Angeles (7000 Hollywood Blvd.), the second star was given on the 50th anniversary of the amusement park at Disneyland (6834 Hollywood Blvd.) ), and the third star honors seven police officers who perished on duty at LAPD (intersection Hollywood Blvd./LaBrea Ave.).

To honor the crew of the Apollo 11 lunar module in the television category, instead of a star, a complete terrazzo plate with a bronze plaque in the shape of a moon (corner of Hollywood Blvd./Vine St.) was used.

All stars awarded in the anniversary year 2010 were also decorated with an emblem for the 50th anniversary of the Walk of Fame.

The Walk of Fame was set up by the Hollywood Chamber of Commerce in 1957/58 to give the film metropolis a face-lift . From thousands of suggestions, four selection committees (one each for the initially four categories of motion pictures , television , recording and radio ) selected a total of 1,558 artists who should be the first to receive the award. To give the public an impression of what the planned Walk of Fame would look like , the stars for eight of these artists ( Olive Borden , Ronald Colman , Louise Fazenda , Preston Foster , Burt Lancaster , Edward Sedgwick , Ernest Torrence and Joanne Woodward) were already given in August 1958 ) provisionally exhibited at the intersection of Hollywood Boulevard and Highland Avenue .

With the groundbreaking on February 8, 1960, construction work began on the Walk of Fame , which was officially inaugurated in November 1960; the first star laid in the new sidewalk was the one for Stanley Kramer in March 1960 . The Californian artist Oliver Weismuller had designed 2,518 “empty” stars for installation in the Walk of Fame , of which the first 1,558 had already been awarded and engraved by spring 1961; there were no individual ceremonies back then. It then took seven years to agree on the selection modalities for future honors. From December 1968 until 1975 a further 99 artists were added, since then about 24 per year. In 1978 the City of Los Angeles elevated the Walk of Fame to a municipal cultural monument; In 1984 the fifth category live theater was added. When the two-thousand-meter mark was exceeded in the 1990s ( Sophia Loren received the 2000th star in February 1994 ), the Walk of Fame was expanded to its present size.

The only artist so far awarded in all five categories is Gene Autry . At the request of Muhammad Ali , who did not want “people to trample on the name of my beloved prophet, from whom my name comes”, in 2002 his star was the only one that was not set on a pavement slab, but is on the facade of the Dolby Theater .

So far, four stars of the Walk of Fame have been stolen. Three of them - those for James Stewart and Kirk Douglas and one of the five stars for Gene Autry - disappeared during construction and were replaced by copies before the originals could later be saved. In November 2005, hitherto unknown thieves stole the star for Gregory Peck , which was soon replaced by a second production.

After Michael Jackson's death in 2009, mourners accidentally gathered at the star of the radio host of the same name because the star of the singer was covered with a red carpet due to a film premiere at Grauman's Chinese Theater.

When the star was made for Julia Louis-Dreyfus in May 2010, her last name was misspelled. The faulty part was replaced before the ceremony. The last time such a mishap happened was at the star for actor Dick Van Dyke 17 years earlier .

On November 1, 2010, Bruce Dern , Diane Ladd and their daughter Laura Dern were honored for the first time with three members of the same family in a joint ceremony with one star each.

The star for Bernardo Bertolucci was affixed on February 19, 2008, but was not officially inaugurated until November 20, 2013 in the presence of the film director who was previously unable to attend due to illness, and is therefore officially listed as the 2513th star after this inauguration date.

In addition to a positive opinion, each proposal must include a photo and a brief curriculum vitae of the proposed person. A sponsor must be named in the application who, in the event of a positive decision for the payment of an amount i. H. v. 40,000 US dollars (as of May 31, 2018) to the Hollywood Historic Trust . This amount is used to cover the manufacturing and installation costs of the star as well as the maintenance costs of the Walk of Fame. Sponsors are often the film studios or producers of the stars, as the award of a star on the Hollywood Walk of Fame is easy to market in the media. Fans are also allowed to submit suggestions, but only with the written consent of the star's management. Deceased stars cannot be proposed until five years after their death.

The application deadline is May 31 of each year; then the five-person selection committee makes its decisions. These must then be approved by the Board of Directors of the Chamber of Commerce and the Los Angeles City Council before they are officially announced. Rejected candidates are automatically included in the selection again in the following year; If the application is rejected again, a new application must be submitted.

On average there are currently around 200 to 300 applications per year, from which 20 to 24 stars are selected. According to the regulations, the public award ceremony must take place within five years of the election in the presence of the honored person or, in the case of fictional characters or posthumous honors, in the presence of a representative.

In 2007 Donald Trump received his star for his television shows. The star has been repeatedly damaged, most recently in July 2018 by a 24-year-old who was charged with willful damage. In August 2018, the West Hollywood City Council called for the star to be removed, as Trump's behavior towards women and immigrants and his rejection of climate protection are incompatible with the values ​​of this region. This is the first time the distance to a star is discussed.

In front of the Grauman's Chinese Theater (6925 Hollywood Blvd.) and in its immediate vicinity, more than 200 stars, mostly actors, have left their hand and shoe prints and autographs on concrete floor slabs since 1927 ; the first to be completed this ceremony were Mary Pickford and Douglas Fairbanks . Apart from the physical proximity, these prints have no direct connection with the Walk of Fame .

Based on the place of honor at Grauman's, there has been a growing series of floor panels with the handprints and names of various French and international stars along the Plage de la Croisette in front of the Palais des Festivals et des Congrès in Cannes , the main venue of the Cannes International Film Festival , since 1947 .

Since 1990 there has also been a counterpart in Rotterdam, the Netherlands , which is officially called the Walk of Fame Europe .

With the Munich Olympic Walk of Stars , a similar place of honor has existed at the Olympic Tower in Munich since 2003 .

Up until 2014, the hand and footprints of 164 Austrian and international sporting greats were immortalized on the so-called Straße der Sieger in Vienna along Mariahilfer Straße in front of the Generali-Center. In the course of the redesign of the shopping street by the Vienna city government, however, these were removed and are currently temporarily stored.

On the southernmost section of Broadway in New York City , where people and events have been honored with confetti parades in the so-called Canyon of Heroes since 1886 , there are around 200 rectangular granite slabs with the names of "heroes" honored by a parade.

On Canada's Walk of Fame in Toronto , actors and film producers as well as musicians, athletes, songwriters, authors, comedians and models have been honored with stars since 1998.

In Hong Kong , the Avenue of Stars is located on the Tsim Sha Tsui harbor promenade near the Museum of Art . The names and handprints of primarily Chinese actors are found over a length of 1.5 kilometers. Individual people are particularly emphasized by sculptures or statues. The inscriptions give the real names of the people in Chinese letters and the names in Latin letters in international use.

In February 2010, the Boulevard der Stars was launched on Potsdamer Platz in Berlin , where artists from German-speaking film and television are honored with a star, following the example of the Walk of Fame in Hollywood. Marlene Dietrich received the first star there .

In Haifa, Israel, there is Film Star avenue in Carmel Center with inset stars and names on the sidewalk.

The football club Borussia Dortmund has the BVB Walk of Fame on a thematic walkway, the star key milestones in their history or personalities of the club dedicated.